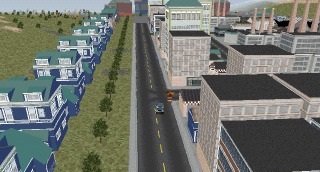 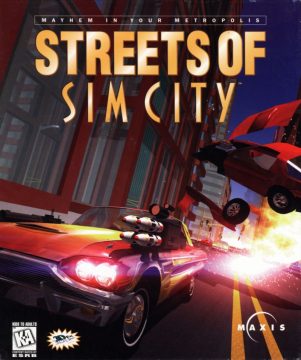 “Mayhem in Your Metropolis”, the tagline promises. Mayhem. Your metropolis. It’s the SimCopter pitch, updated to emphasize SimCity 2000 integration. From there, Streets of SimCity diverges wildly.

Players retrofit classic cars with an arsenal of Bond gadgets – rockets, machine guns, land mines, oil slicks, airfoils, jumpjets – before departing the safety of the garage in search of mayhem. In contrast to SimCopter‘s slower pace, which kept players in a single city for an hour or more, Streets missions last from five to thirty minutes. 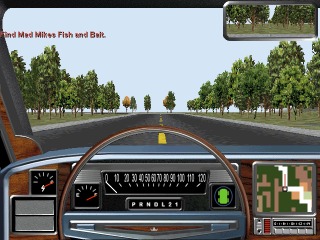 Individual missions remix the same mechanics of delivering packages, destroying buildings, fighting, and upgrading your arsenal. It’s the map design that provides the variety. You’ll brawl on an island nuclear plant, at an airport, in the Appalachians, etcetera. And to accommodate free spirits, Streets supports both deathmatch and joyriding in any SimCity 2000 or SCURK creation.

Still, if this sounds more Twisted Metal than SimCity, that’s because Streets retains little of the Sim DNA. What, exactly, does it simulate? Not driving. Cars feature different top speeds and acceleration, but all are variations on a cartoonish physics model that permits instant bootleg turns and even strafing. But it doesn’t simulate city transit, either, not even in parody as in Crazy Taxi or Midtown Madness. The highways and byways are as bare as a rural road. 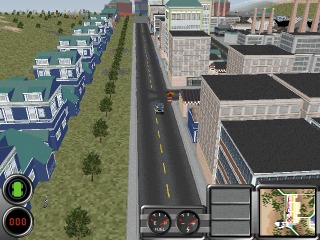 What Streets really simulates is watching television. Alone. Late at night. This theme begins with analog channel tuning during the intro video, continues through kitschy menus, and finally informs how Streets collects its missions as episodes of fictional television shows. “Zippy’s Courier Service” casts the player as a redneck deliveryman expanding his operations. “Granny’s Wild Ride” pits an old lady and her dog against an alien invasion. There’s another scenario for racing, and an eponymous anthology scenario for miscellaneous gimmick missions.

These scenarios provide flavor as well as function – Granny banters with her dog, Galahad mutters film-noir quips. And Streets needs personality, badly. Even television can provide intimacy in isolation, at least wherever there are human stories with human concerns. Streets, by contrast, is desolate. 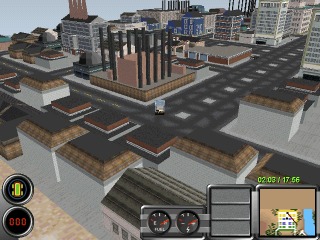 The little flapping citizens of SimCopter are gone. Perhaps Wright didn’t want a Carmageddon-esque slaughter of his peeping creations, or thought their fluorescent colors clashed with Streets‘ drab palette. Either way, Streets replaces them with a cadre of inscrutable men in pale green. But where the old Simlings offered a kind of jabbering personality, the silent clones in Streets just mechanically stalk the cities with brown parcels. The only other sentient thing is the army of enemy hunter-killers, chiefly composed of blacked-out 1960s Cadillacs that endlessly chase, ram, and snipe.

Streets‘ glaring omission of humanity alienates it from the wider Sim franchise, which always balanced godlike detachment with the illusion of bustling life. SimCity tucked you away in the clouds, yes, but it comforted you with a burgeoning society. SimCopter had its Simlings and cars and even some planes. Your best friend in Streets is your car radio. 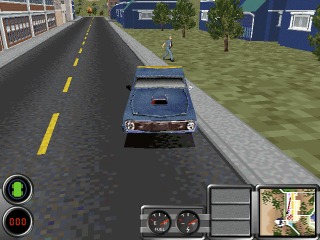 It’s a simple idea. Instead of piping in a pre-planned soundtrack, permit the player a choice of several different stations. This ‘Sim Radio’ concept existed first in SimCopter, albeit with immature execution – the satire was less sharp, and the music was intentionally downsampled to mimic a transistor radio. Sim Radio comes into its own in Streets. Jerry Martin crafted reverent takes on a variety of genres: Bluegrass, Jazz, Techno, Rock. Only the lyrics in a few songs – “Just a Splatter”, “Czar” – are delivered with tongue in cheek. The commercials and station bumps that fill the gaps skewer everything from awkward local ads to white-collar crime, temp agencies, college radio, consumerism, and car culture.

Sim Radio and the television show framing devices are the kernel of something good. Not necessarily a good Sim game, but a good satirical car combat game. Unfortunately Streets was rushed, as the vacuous world and constant technical issues attest. The game crashed often, even on machines of the time, and latent bugs soon combined with faster processors to make the game unplayable without a frame limiter. 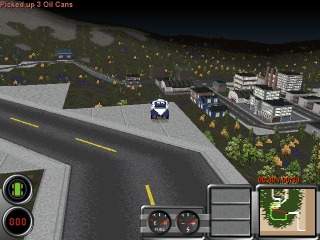 This is in contrast to the largely stable SimCopter. What happened? Well, Streets shipped with support for hardware accelerated graphics via 3dfx’s Glide API, while SimCopter only received 3dfx support as an experimental novelty in the 1.02 patch. Apparently Maxis didn’t have time to harden the changes to the engine, but the years have proven that to be the wrong choice. Streets‘ notoriety for crashing has far outweighed any marginal graphical upgrades.

This is, surely, one reason Streets has soured in many memories where SimCopter has retained a warmer welcome. But SimCopter also better implemented the basic Maxis blueprint of a software toy – that is, subsystems interacting to surprise an empowered player. Streets has only one subsystem to offer, and that’s the enemy AI. There is also the issue of novelty. 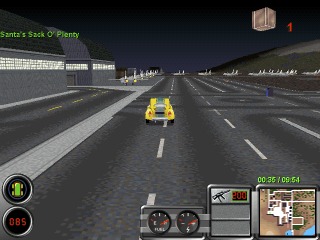 Streets was eclipsed in its own day by Vigilante 8 and Interstate ’76, while few civilian helicopter games preceded or followed SimCopter. That’s because SimCopter took the established helicopter simulation genre, dense with military games, and gave it a civilian spin. Streets went the opposite direction, taking the car combat genre andoffering the vanilla experience.

Perhaps this reflects the absence of Will Wright’s guiding hand. Even aggressive deadlines, cut content, and insufficient resources couldn’t clean his fingerprints from SimCopter. It is an imperfect execution on an auteur’s vision. By comparison, Streets‘ concept has the ring of a focus group or a management brainstorming session rather than one man’s daydreams. And the execution smacks of a development team that knew what it was working on no longer mattered. 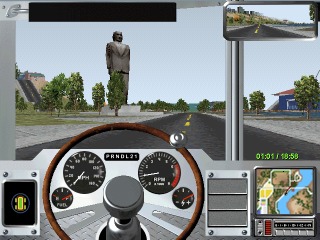 So is Streets worth a look for the inquisitive computer game archaeologist? Tentatively, yes. Assuming that it’s running at the right framerate – either on a VM, Wine, or legacy hardware – there are redeeming qualities. Jerry Martin’s music and the zany Sim Radio are worth a listen in context, and you may even discover that one or two of the television show framing devices appeals to you enough to merit a playthrough. And there’s the ability to strap six machine guns to a bread truck.

With low expectations and some time, Streets is a game that may grow on you. Unfortunately, the public and critics alike had neither to spare in 1997. Pressure was high for Maxis to deliver something great, and the ’95-’96 lineup had frittered away much of the public’s goodwill.

Usenet chatter was excoriating, even angry, from the moment Streets released. There’s no evidence that the car shop features, netplay, SCURK, or race editor were sufficient to encourage any kind of community development around Streets. Maxis released only a small patch for Voodoo Rush graphics cards, but otherwise left the many technical bugs un-squashed. In January 1998, the Maxis website featured a “Baby You Can Paint My Car” contest. 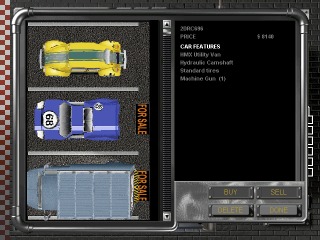 Salvation dawned on Maxis in January 1999 with SimCity 3000, an isometric sequel built under Luc Barthelet’s conservative guidance. It proved to be what fans wanted, or at least what they gratefully accepted after so long a wait. The new millennium unleashed The Sims, Will Wright’s visionary :’dollhouse simulation”. Three years later, SimCity achieved its apex with the franchise’s fourth installment – this time, in 3D.

All this market success cleared SimCopter and Streets of blame for Maxis’ near-demise. Good times had returned to Walnut Creek, and they seemed destined to roll on indefinitely.

This side of Maxis’ closure in 2015, we can see these games not as utter failures, but as middling games made by a company in need of direction. The question is, what does this knowledge do for us? In Men and Ideas, Huizinga comments that history is the “interpretation of the significance that the past has for us.” What significance do SimCopter and Streets hold, if any?

First is the ominous fact that neither game would ever be greenlit by a major company today. They were gambles made by a company capable of great things. Sometimes a kind of spontaneous alchemy mixes talent and risk into pure gold. Sometimes it doesn’t. Either way, it’s hard to argue gaming didn’t benefit from these gambits. They often admitted fresh air and light into an industry all too predisposed toward orthodoxy.

Some of this agitation persists today in the indie scene, but there’s quantitative and often qualitative difference between an indie studio and a top-tier development house. The implementation of an idea by a five-man team will not be the same as that of a AAA studio. But in these latter days of high production costs and stiff competition from a fractured entertainment culture, the major studios have vacated the midrange. The gap between their output and the indies has never been wider.

Second is that today’s gaming scandal and outrage will become the object of future bemused analysis. In their time, SimCopter and Streets were controversial. Jacques Servin’s hacktivism prompted a flurry of journalism, a patch, and a press release. Gamers who felt the games were not on par with SimCity let the world know about it, long and loud and livid. The message boards churned with anger, calls went out for Maxis to go bankrupt, accusations were made that Streets had ripped off other games, and so on.

Ultimately the uproar subsided and everyone moved on to other issues. This isn’t a call to apathy, or a claim that gaming is of no consequence in the greater scheme. After all, there are times that consumers should be vocal, and there are issues that matter. But in the hypertension of the Internet age, it’s all too easy to get carried away and let the rush float us from one crisis to the next.

As we learn to hold the longer view, to take a position that considers the big picture and the relation of priorities, we begin to learn something SimCity was trying to teach us all along.