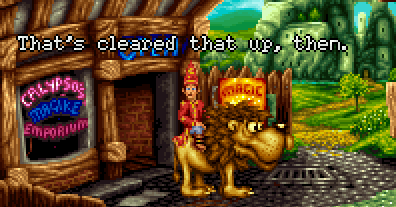 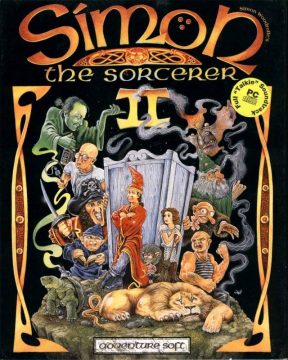 Simon the Sorcerer II opens up with a young boy named Runt, who wants nothing more than to become an evil magician. During this learning process, he decides to resurrect Sordid, who is still none too pleased with being killed in the last game. Now with a robotic body, Sordid sends a wardrobe back into the real world, with the hope of capturing Simon and taking his revenge. Things get screwed up when Simon ends up at Calypso’s house instead of Sordid’s fortress. Unaware of what’s going on, Simon begins searching for a can of Mucusade (a play off the Lucozade energy drink) to recharge the wardrobe and return home. Much of the game is spent searching for this drink, only for Simon to find that Sordid has kidnapped Calypso’s daughter, Alix. Simon, not exactly thrilled with the prospect of doing any more work than he really has to, sets off to find her anyway.

The first half of the game takes place in a rather large city. For those sick of all of the forest wandering in the first game, nearly all navigation is done through a map screen, alleviating one the bigger headaches of the original. The interface is a bit different, dropping a few verbs and implementing an icon-based command system, although it’s a bit hard to understand at first. (The magnet grabbing the nail is “pick up”, the hammer hitting the nail is “use” – they make sense but it’s not as immediately obvious as it should be.) The structure is much the same, as you wander around town searching for various items, and eventually stumbling upon puzzles where they’re required. The formerly all fantasy/medieval game world now has a number of anachronistic elements, most notably a McDonalds-esque fast food chain. Eventually Simon gets kidnapped by pirates and ends up on a (not quite) deserted island, before taking off for Sordid’s fortress.

Simon is a bit older in this installment, having grown a ponytail and wearing a somewhat less purple wizard’s robe, which becomes his primary outfit for the rest of the series. His voice is now provided by Brian Bowles (Chris Barrie had become a bit too popular in the meantime and his asking price was too high), and while some fans aren’t too happy with his delivery, it still keeps the spirit of the character. Barrie’s voice is fairly similar to his predecessor’s, just a bit deeper. The snottier elements of Simon’s personality are played up a bit more, so those who found him abrasive in the first game will find his sarcasm even more unlikable here.

But like the previous game, even if you don’t care for the main character, it’s the supporting cast that really makes the game. Right at the start, you meet the Three Bears, who live in constant paranoia of Goldilocks, who is, in fact, a professional thief. One of the prisoners you meet on the pirate ship bears an explicit resemblance to Mr. T. Later on you’ll meet the three witches from Macbeth, each of whom is disabled in some manner. All throughout the game you’ll find a little hedgehog boy wandering through the scenery, occasionally getting into mischief. His purpose is never even remotely explained – he seems to exist just to be weird. You’ll meet a genie with a bad hangover, who, despite attempting to grant your wishes, will accidentally end up teleporting you into some sort of ridiculous situation, including a ride aboard a spacecraft a la Life of Brian. A handful of characters from the first game make an appearance too, including Gerard and Max, the guard demons (who are also quite displeased with Simon) and the woodworms. Most amusing is the Swampling, who somehow ended up as the corporate chairman of a restaurant chain called MucSwamplings. The rest of the corporation has revised his swamp stew formula into something vaguely edible but completely removing its homebrew essence, causing the Swampling much consternation. It’s such a wacky character arc that it’s hard not to be amused by its absurdity.

But perhaps the funniest moments come from the roleplayers. Since they already live in a fantasy world filled with dungeons and dragons, they find their escape in Apartments and Accountants, which emulates the mundane minutiae of British life. There’s a remarkable amount of detail put into these guys – you can sit and listen to their ridiculous game for several minutes, and each of the players plays off some kind of nerd cliché, the most amusing one being the techie geek who can’t stop talking about computers. At one point you can join in, during which you need to defeat an interior decorator with a pair of loaded dice.

Visually, Simon II is about on par with its predecessor. The backgrounds aren’t quite as colorful, but they’re still well detailed. For some reason, nearly all of the character sprites (outside of Simon) are drawn with large, deformed heads, which looks more nasty than funny.

Many fans seem to prefer the first Simon, mostly because it’s a bit less snarky, but for the most part, Simon II fixes nearly every complaint from its predecessor. It still ends on yet another cliffhanger, but at least it’s longer and more involved than the last game.