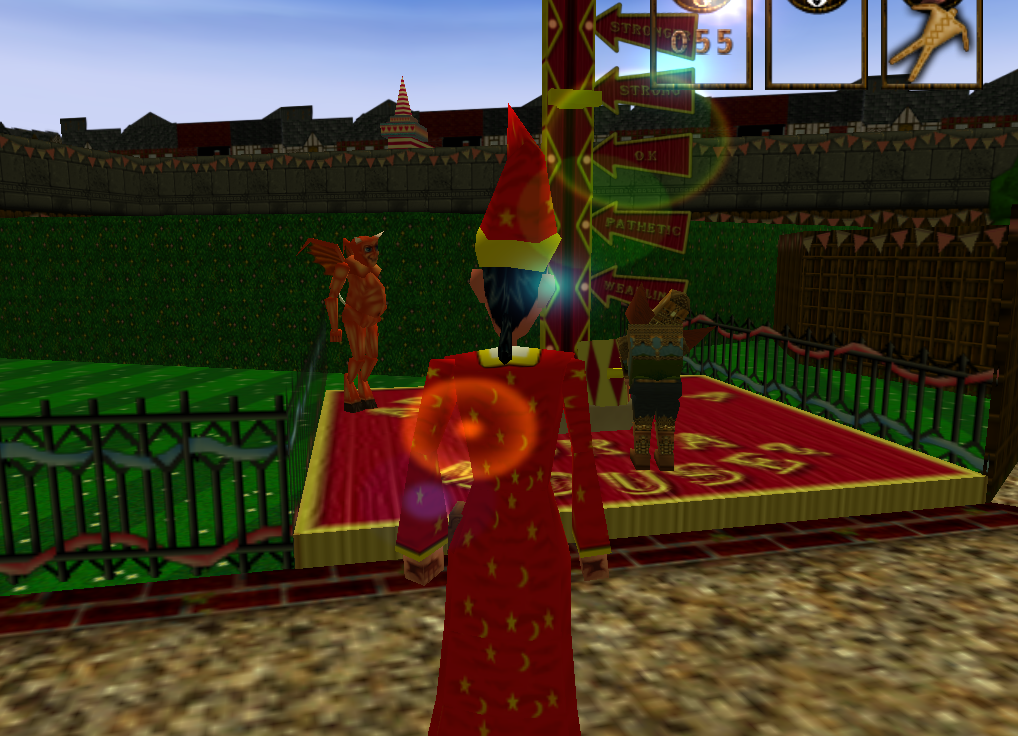 After Simon the Sorcerer II, Adventure Soft took a break with The Feeble Files, another humorous adventure game, this time focusing on science fiction. After that more or less failed, they formed Headfirst Productions and returned to Simon, deciding to take him into the third dimension.

The canon of video game history shows a number of 2D franchises which totally screwed up their transitions to 3D. This evolution was particularly unkind to the adventure game genre, but while games like Broken Sword: The Sleeping Dragon and Escape from Monkey Island aren’t exactly the pinnacles of their respective series, they’re at least still pretty good. The same can’t be said of Simon the Sorcerer 3D. 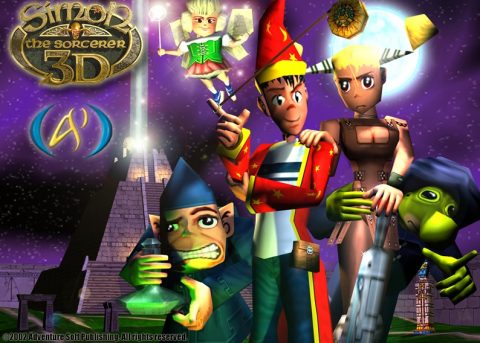 First, the graphics. They’re beyond horrible. The character models are very boxy and extremely low quality. All of the environments are totally 3D too, but they’re pasted with the same textures ad nauseam. This was typical of early 3D, but that is no excuse for Simon 3D, which was released in 2002. If it wasn’t for the higher resolution, it would look like a PlayStation game from at least five years prior – and not a particularly good one at that. It doesn’t help that the 3D renders on the covers of the Puzzle Pack released in the seven year gap between the second and third games set some measure of expectations, which were missed entirely.

The world design suffers from the same problem as many early 3D games – it’s just simply way too big and empty, and it takes forever to traverse, even when you’re running. (Later in the game you can transport around a map via a Doctor Who-style telephone booth, but even that’s limited.) It feels padded, tedious, and overly long, because it takes forever to go anywhere or do anything. The world is bright and colorful, but that’s about the best thing to say about it. 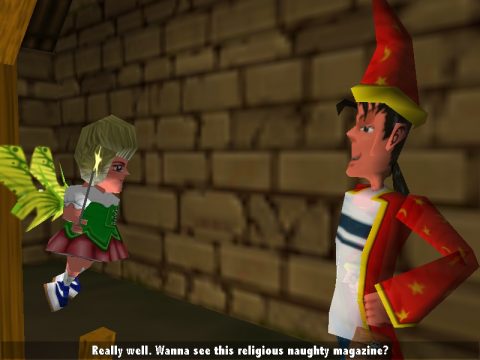 The mouse controls have been ditched for direct keyboard control, which is far from great. Most of the time the camera is pointed directly behind Simon, but in indoor segments, it tends to change to a static angle. It rarely works well, especially when it erratically swings around while running down narrow corridors. The interface is cumbersome, requiring that you either cycle through your entire inventory or access the submenu, which, thankfully, is at least controlled with the mouse. There’s no gamepad support either, unless you use a third party program. And for some reason, the developers thought that the controls were functional enough for action sequences, which the game completely fails at. It’s the first Simon game where you can actually get killed, although there are “respawn tiles” where you will resurrect (similar to those JRPG games, Simon remarks). You also can no longer skip through any of the dialogue. And that’s not including all of the glitches, crashes, and other technical issues. In short, this game is a mess.

It’s actually a huge shame, because at its core, it’s still an amusing Simon game. The last title ended with Simon and Sordid switching bodies. Well, Sordid got sick of being a human and his plans to conquer the “real world” just didn’t work out, so his apprentice Runt has created yet another new body for him. With the help of Calypso, Simon’s soul is reunited with his body, and it’s once again up to him to stop Sordid from ruling the whole universe.

The writing and sense of humor, as well as the voice acting, is generally on par with at least the second game. There are a number of returning characters, including the Swampling, who’s now become an eco-terrorist after his homeland is threatened. The woodworm, the role players, Goldilocks, and the demons also make appearances again, as well as Sordid’s apprentice Runt, who only had a minor role in the second game. The second half of the adventure involves assembling a group of four legendary warriors: the buxom, scantily clad lady warrior Melissa Leg, the somewhat dead Jar Nin, the largely daft Coneman the Barabrain, and the transmogrified Prince Brave, who’s stuck as frog. The unfortunate circumstance is that Simon had pissed off nearly all of these people earlier in his journey, which is naturally a bit awkward for him. Simon also has his own fairy godmother, although she’s not particularly funny and mostly acts as a tutorial guide. 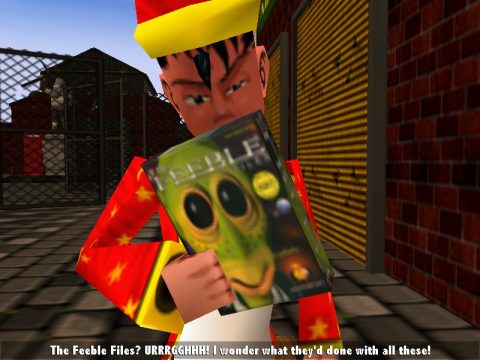 At one point, Simon comes across a warehouse filled with unsold copies of The Feeble Files, which he muses would make good coasters. Given that Hasbro Interactive was originally going to be the publisher, there are also a few random, tongue-in-cheek endorsements of their board games. In a particularly trippy, fourth-wall-breaking bit, the final puzzle requires that you eject a CD-ROM for a computer. The problem is, there’s no eject button in the game. Like Sega’s X-Men game for the Genesis, which required that you push the Reset button on the console to get past a certain point, the solution is to actually eject the drive on your own computer. It’s a vaguely clever idea, ruined by some level of technical limitations, because Windows needs to be set up properly for it to work at all.

But that really encapsulates all of the major problems with the game. It’s still fairly clever, but it’s mired beneath a game that borders on unplayability. Apparently Adventure Soft had originally planned the game for 2D, similar to The Feeble Files, but ditched all of their previous work when they realized that such a product would never get published in the marketplace. But their hastily assembled substitute didn’t do them any favors either, especially at the time of its release. (To be fair, the game was apparently finished in 2000, but due to various logistical issues, wasn’t actually published until two years later.) If there’s any modern adventure game that’s clamoring for a demake – that is, a return to beautiful point-and-click VGA – it’s this one. 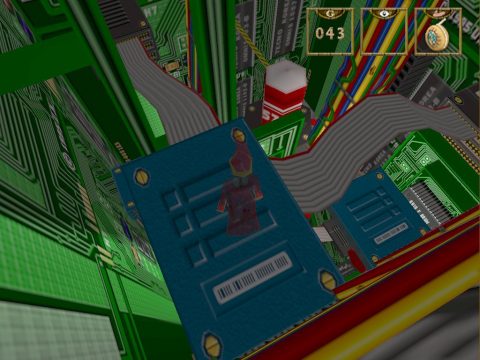 At any rate, after Simon 3D, Headfirst went on to create Call of Cthulhu: Dark Corners of the Earth, a fairly decent first person shooter/adventure game for the Xbox and PC, which unfortunately flopped and essentially put them out of business, leaving others to pick up the reins for future Simon titles.