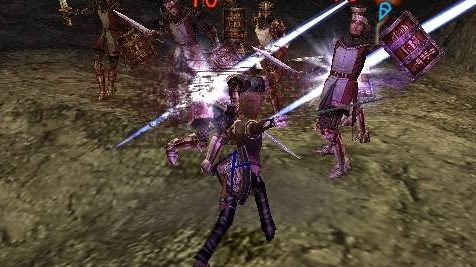 Drakengard wasn’t exactly a smash in Japan or in the States, but, for whatever reason, it seemed to develop quite a cult following in Europe (possibly due to the Europe-exclusive mobile phone tie-in, but since it was terrible, probably not). cavia was given the green light to give it another go. This time, however, Square Enix would distance themselves a bit from the project. While still publishing the game worldwide, Ubisoft was tasked with localizing the game outside of Japan, perhaps to exploit the game’s popularity in Europe by utilizing a popular European brand. The game also had a substantially smaller budget, which was apparent in its lack of advertising and media attention prior to release.

Drakengard‘s ending(s) left things a bit open, and Drakengard 2‘s main purpose is to tie everything up. The game begins under the assumption that you got the game’s first ending, where Angelus had been used to create the Seal. 18 years have passed, Caim’s whereabouts are unknown, and we instead come to take the role of a young man named Nowe. Nowe is one of the Knights of the Seal, a force tasked with protecting the various keys that hold the Dragon Seal in place. As Nowe advances through the ranks, guided by his dragon companion, he meets a mysterious young woman named Manah, who seeks to rebel against the Knights and destroy the keys protecting the seal. Through Manah, Nowe learns of the corruption of the Knights of the Seal and their oppression of the people outside their aristocracy. Nowe decides to defect from the Knights and cut his own path. After that, all hell breaks loose (quite literally). Fortunately, Nowe is not alone. 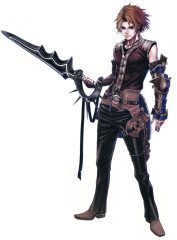 Nowe (annoyingly pronounced “No Way!”) is a plucky, young, optimistic hero, the antithesis of his predecessor, Caim. This also makes him much more boring and predictable. There really isn’t much to say about Nowe, sadly. He’s as typical as they come; orphaned at a young age, determined to right the wrongs of the world, and harboring a hidden power that will be the key to doing so. In combat, Nowe uses one-handed swords and larger, slower two-handed swords.

Legna is Nowe’s dragon companion. Nowe shares a much different relationship with Legna than Caim did with Angelus in the first game. Having raised Nowe since he was orphaned, Legna is very close to him and watches out for him, constantly giving him advice and guiding him in the right direction. Or is he…? 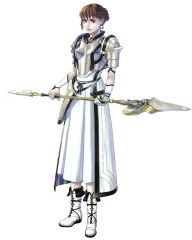 Eris is one of the elite amongst the ranks of the Knights of the Seal and a long-time friend of Nowe’s. You get to use her briefly in the beginning chapters of the game, but her faith in the Knights is not as easily shaken as Nowe’s, so when he defects, they find themselves on opposite sides of a growing conflict. In battle, Eris uses lances.

Yes, the main antagonist from the first game is now the leading female and the love interest for the hero. In repentance for her horrific actions under the control of the Watchers in the first game, Manah now helps the now oppressed survivors of the war that occurred 18 years ago and leads a humanitarian rebellion against the Knights of the Seal. Manah is initially an enemy, but Nowe’s faith in the Knights is shaken with her revelations and Nowe decides to join her cause. In battle, Manah uses a staff.

A mysterious, cloaked figure who goes around slaughtering the Knights and seeks to destroy the seal. The game doesn’t exactly keep the fact that he’s actually Caim a secret. Whatever hells twisted Caim into such a creature over the past 18 years are unknown. What is known is that he’ll do anything to free Angelus from the burden of the seal. 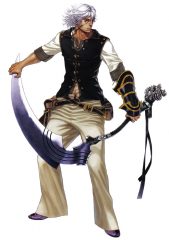 Urick is an ex-Knight and a friend of Nowe’s long-dead father. Nowe quickly develops a friendship with Urick and becomes a member of your party for awhile. However, it’s revealed that Urick is in fact one of the key guardians of the seal. This puts him on Caim’s hit list, and thus Nowe’s group and Caim are destined to clash. In battle, Urick uses axes and scythes.

Seere is now the leader of the Knights of the Seal and essentially controls the free world. Having made a pact in the first game (unlike his sister, Manah), he has not aged at all in the past 18 years. Unfortunately, he doesn’t seem to be fully aware of the atrocities being committed by his generals and the Knights of the Seal. 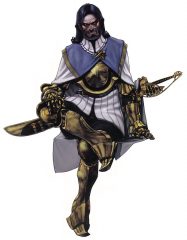 Gismor is the head honcho of the Knights and all the key guardians take their orders directly from him. He has always been at odds with Nowe and vehemently seeks to kill him when he defects. An all around douchebag.

One of the three crazies that form the key guardians, Drakengard 2‘s resident Omniscient Council of Vagueness, who take orders directly from General Gismor. Zhangpo is a burly, stupid berserker who seems to be motivated entirely by food.

Hanch is the game’s obligatory goth, and looks like she was fired out of a cannon through a few clotheslines of Black Angel merchandise. Another one of the key guardians.

Yaha is a rather effeminate man , and another one of the key guardians. 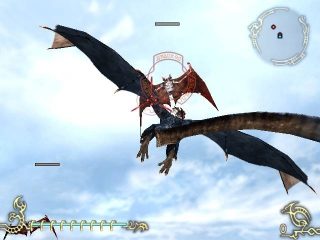 Drakengard 2 is, in every way that two things can be, the complete polar opposite of Drakengard. The first game had great, twisted characters, a bleak and macabre atmosphere, and an engaging, twist-laden story. On the flip side, the game was rather repetitive and the combat was somewhat clunky. In contrast, Drakengard 2 has an excellent combat system with lots of variety added to both ground and aerial battles. However, the story is a complete, cliché-ridden trainwreck that all but negates the potential the first game left for it. A perceived reason for this is Yoko Taro’s lesser role among the creative team, where he was primarily just a video editor. The story was written by Sawako Natori, who was one of the writers for the original game, and who later worked with Taro on Nier. 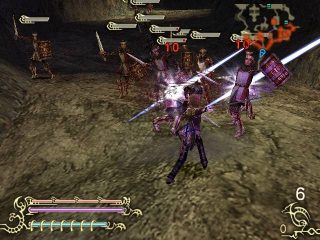 Let’s talk about the good, first. Drakengard 2‘s battles are infinitely more fun than the battles in the first game. In contrast to Caim’s single, endless and universal moveset for all his weapons, Nowe and his comrades use a series of combo strings that are unique to each weapon type. Moreover, each weapon has its own assortment of combos that it takes from a pool, so no two weapons have the same set of combos. Different combos are more useful in different situations, whether you’re going for crowd-clearing or a focused, singular onslaught, much like the similar Dynasty Warriors series. Nowe and his companions also have a lot more innate commands. You can now counter, recover in mid air, dodge, and do air combos. 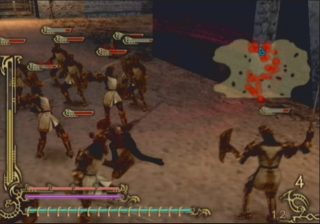 Your characters can also now equip more than just weapons. Nowe and his team have a stock of consumable items that restore health and magic. The health potions can also be used in aerial combat, making them much more tolerable than some of the nearly impossible aerial stages in the first Drakengard. Also available to your characters are special stat-enhancing accessories. It should also be noted that these weapons and items are no longer simply found, as the game now has a more detailed map with towns to stop in with shops and such. 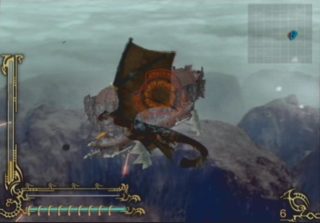 On top of that, Drakengard 2 has more enemies that provide more functions for the enemy ranks than simply “Run up to player and hit him”. Now you’ll go up against giant trolls, hulking gladiators that are nearly invincible, and tiny goblins that set up bombs all over the battlefield. The stages are also much more dynamic, with multiple sub areas, differing levels of height, and complete, indoor dungeons that connect directly to the battlefields without any loading in between. And most importantly of all, there are now a series of epic and challenging boss fights that break up the monotony of the mass scale battles. 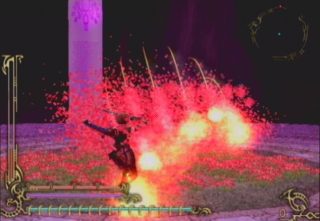 In aerial combat, you have Legna, who has all the same functions as Angelus, but has various different types of ammo as well, able to shoot rapid, automatic bursts, large fireballs that create shockwaves, summon lightning strikes, or even create a powerful forcefield. 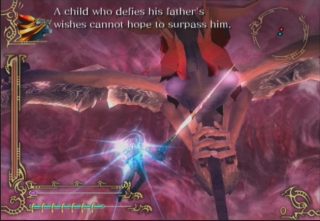 Unfortunately, all of this improvement to the game itself comes at the cost of the narrative. First of all, the presentation has a markedly budgeted look. Most of the cutscenes are now still-shots of ingame generated models with voice acting over them (the voice acting has also taken a big hit this time around). Particularly painful are the character designs, which have taken a more generic, anime feel. The main character is whiny, annoying, uninteresting, and generally unlikable, the complete opposite of the muted, bloodthirsty, nigh evil Caim we took the role of in the first game (it’s no surprise that the best moments in Drakengard 2‘s story are the moments that involve characters from the first game). Don’t get me wrong, there are some great twists and there’s still quite a lot of dark imagery, but the eloquent writing and morbid irony of the first game is all but completely stripped away in favor of something more digestible for the average gamer. 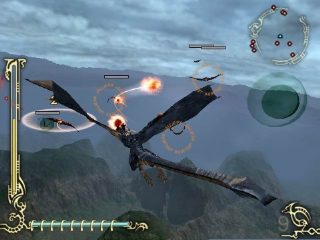 Also, in spite of the combat system itself being more enjoyable, there’s no longer the variety of magic that was in the first Drakengard. Each weapon has a spell, but they’re not unique. Now, each weapon type has a pool of about 5 or 6 different spells. It’s also worth noting that the weapons no longer change appearance as they level up. The weapons reappearing from Drakengard remain in their fully leveled forms. While that’s acceptable, I guess, it just doesn’t feel as rewarding. And there’s less weapons than in the first game, to boot. 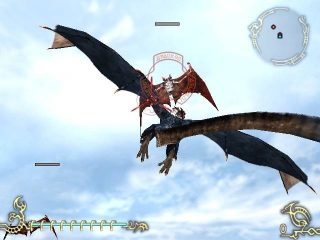 One thing that has maintained quality is the music. While Drakengard 2‘s soundtrack bares little resemblance to the disturbing, discordant melodies from the first game, the music that is here is absolutely fantastic, particularly the main theme, “Symphonic Poem ~Forbidden Prelude~”. The soundtrack was provided by video game music studio T’s Music. 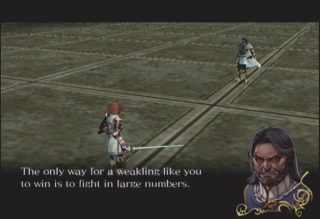 In the end, Drakengard 2 is a step back in as many ways as it is a step forward. You once again have half an amazing game and half a bland one, only this time, the experience is polarized. Fans of the first game should approach Drakengard 2 with extreme caution.