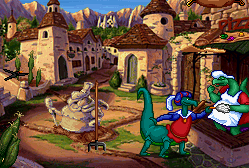 Blazing Dragons is based on the relatively obscure Canadian cartoon of the same name and is the brainchild of Terry Jones of Monty Python fame. In an upheaval of common tropes, Blazing Dragons reverses the usual knights/dragons dynamic by turning the chivalrous knights into villains and turning the dragons into heroes. The story takes place in Camelhot, in the center of Dragondom. It’s all silly, of course, and is similar to Terry Pratchett’s Discworld, both being fantasy series full of oddball characters and off-kilter quirks. Although Blazing Dragons seems to aim for a slightly younger audience, it’s got enough cleverness that it reaches beyond its Saturday morning origins and manages to be quite entertaining regardless of one’s age. 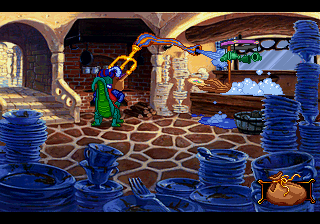 Both the game and the cartoon star Flicker, a rather intelligent dragon who works in the castle as an inventor. As he gets up out of bed, having successfully invented and tested the world’s first alarm clock, he’s summoned to meet with the Knights of the Square Table, who are discussing a Royal Tournament. The prize? The winner takes the hand of the beautiful (in dragon terms) Princess Flame. Their meeting is interrupted by the portly knight Sir George, who wishes to enter the tournament as part of a halfway elaborate revenge scheme. Of course, humans aren’t technically allowed to compete, but instead he enters a mysterious black dragon to compete in his stead. The Knights set off to gather intelligence on this new foe, while Flicker is sentenced to wash a huge pile of dishes, since he is essentially a nobody. Instead, he needs to outwit both his bumbling king and the evil knights to win the tournament for himself.

After using his genius to escape KP duty, Flicker must convince one of the Knights to train him so he can become a squire and enter the tournament. This is not easy, because as it turns out, they’re all idiots, more or less, and have all gotten wrapped up in a variety of bizarre situations. Take, for example, the supposedly brilliant Sir Burnavere, who convinced the kingdom that the world is shaped like a duck, and was awarded a ribbon due to this amazing discovery. All of the fancy words in the world won’t save him from the chair of the wicked Dr. Fraud. Meanwhile, the pretty boy Sir Blaze is so enchanted with his own reflection in the lake that he’s completely forgotten his duties. Sir Gasflame has eyesight so terrible that he’s mistaken the Camelhot castle for the enemy’s and insists on attacking it, while Sir Loungealot is far too lazy to actually fight the black dragon and insists that it come to him. Instead, Flame is then kidnapped by the humans, and Flicker must be off to rescue her. 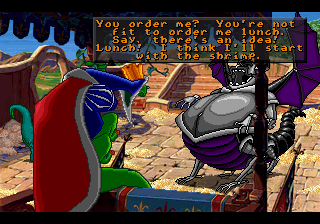 Beyond the dimwitted Knights of the Square Table, the kingdom of Camelhot is home to a variety of bizarre and silly folks. Outside of the Home of the Grimly Insane, a clinic for psychotic storybook characters, you run into a balding Rapunzel who sufferers from Chaetophobia, otherwise known as a crippling fear of hair. She shrieks, claws at her head, and goes absolutely bonkers when you use some hair tonic on her. Inside the asylum you’ll meet a Pied Piper who plays endlessly due to a compulsive fear of rats, and a confused frog that has mistakenly been transformed into a prince. Recurring foes include redneck hunters, one of whom manages to capture the Lady of the Lake, mistaking her for a mere fish. There are plenty of good jokes, a few double entendres, and some amusing self referential humor. During the ending credits, Trivet the Jester is backstage yelling at his agent for putting him in this terrible game, and how Flicker appeared in more scenes than he did. It is quite odd, given that Trivet is featured on the cover despite not at all being the main character of the game.

There are quite a few differences between the game and the cartoon, which is probably for the better. The character artwork in the game is quite a bit different and much improved over the somewhat hasty designs of the cartoon. Rather than taking footage from the cartoons, the artists redrew everything in pixel artwork in the style of the LucasArts games. The VGA quality graphics are low res compared to PC adventures games of 1996, but it’s still quality 2D artwork, which means it’s aged much better than 95% of the PlayStation’s library. 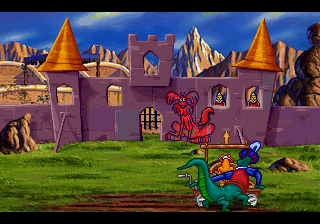 Most of Blazing Dragons’ puzzles take advantage of Flicker’s skill as an inventor and require assembling multi-part machines out of random items. This is usually frustrating in adventure games, but Flicker’s already invented everything you need and has it all handily drawn out in his notebook. All you need to do is find bits of equipment and you’re set. The first puzzle has you creating an automatic dishwasher with the help of a boiling tea kettle, a candle holder, a knitted tail warmer and a mop. The rest are quite easy, and the manual even gives explicit hints on how to solve pretty much everything. There are also a handful of crazy minigames. In the Cat-a-Pult minigame, you launch – what else? – a cat at a variety of targets. It’s particularly silly because instead of firing multiple cats, you simply fire the same cat over and over, who faithfully runs back to you despite being smashed repeatedly into the scenery. Another vaguely rhythm based game is a dancing contest against an Arnold Schwarzenegger look (and sound)-a-like. The most aggravating is the thumb wrestling game, which amounts to barely more than button mashing. Overall, these aren’t terrible, but they could’ve been ditched and not been missed.

The voice acting is top tier. The cover notes the presence of Terry Jones and Cheech Marin, the former playing Trivet, while the latter does Sir George. A number of other cartoon vets round out the rest of the cast, including Jim Cummings, Kath Soucie, Harry Shearer, and Charlie Adler. Newcomer Joseph Rye pulls off the role of Flicker admirably, while the actor who plays Loungealot, Jeff Bennet, does an admirable John Cleese impression. 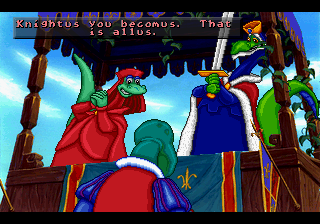 One has to wonder why exactly Blazing Dragons was made only for consoles with no computer release, although it’s still quite functional. Controlling the cursor with the joypad is not exactly ideal, and while there are annoying load segments between screens, at least they’re brief. It’s a pleasant, funny game that’s only somewhat held back by its incredibly short length. The entirety of the game is maybe only slightly longer than a single act in a Monkey Island game, and it’s over far too soon. On the other hand, maybe it’s for the best, because to contrast it there’s the Discworld adventure game. That game not only went on for far too long, but was also stupidly difficult. Blazing Dragons is much friendlier, and does a better job with this style of British humour without resorting to frustration.