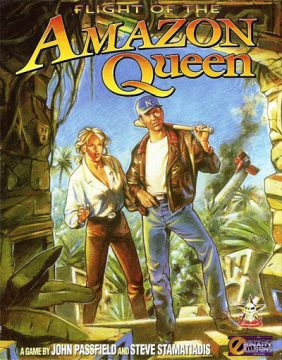 Flight of the Amazon Queen so desperately wants to be a LucasArts game. Largely designed by two guys out of Brisbane, Australia, it’s best described as Indiana Jones meets Monkey Island. It’s hard to hold it against them, since it emulates the style and humor so remarkably well that it quickly squashes any potential cries of plagiarism and emerges as an entertaining game in its own right.

The player controls Joe King (Pilot for Hire), who is contracted to fly the beautiful actress Faye Russell to a photo shoot in South America. They never quite make it to their destination, though, as they end up crashing in the middle of the Amazon rain forest. Leaving behind both Faye and his trusty mechanic, Joe sets off on his own to try to find a way to repair his airplane. 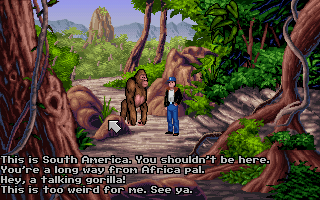 That never quite happens, though, as Joe gets caught up in a number of offbeat adventures. The Amazon, at least the spot you’ve crashed into, as quite populated, as you’ll run into explorers, missionaries, and a pygmy village that just happens to have a 24 hour convenience store. More important, however, is the village of gorgeous Amazon women, who initially imprison Joe for a series of mating rituals. But they actually have more pressing concerns – an evil scientist, masquerading as a lederhosen manufacturer, has been kidnapping the locals and running horrible experiments on them. At the head of this scheme is Dr. Ironstein, an evil German scientist who’s melding dinosaur DNA with humans to create an army of super mutants, in a dastardly plot to take over the world.

There’s a lot of silliness to be had, much of which comes from affectionate parodies of 50’s pulp serials. Of course, there are the Indiana Jones similarities – the evil German bad guys, for instance, although they aren’t technically Nazis. At one point Joe emphatically remarks about how much he isn’t afraid of snakes, and one of the main goals of the game is to find the mystical Crystal Skull, a concept predating the actual Indy movie by more than a decade. There’s also a hidden valley like The Lost World, which is still populated by dinosaurs, and the game’s climatic moment takes place amidst a Godzilla-style kaiju battle. There are references to cheesy superhero comics, and one of the major puzzles involves assembling the necessary materials to build a jetpack. 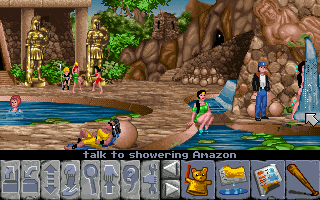 Flight of the Amazon Queen also sometimes subverts the formula in clever ways. One of the first obstacles you need to get past is a gigantic gorilla. Not more than a few screens away, across a broken bridge, is a banana. It’s easy enough to fix the bridge and grab it, but if you hand it over to the gorilla, he’ll just eat it, smile, and refuse to budge. Instead, you’re supposed to talk to him a bit, eventually revealing that he can speak English. You need to convince him that gorillas live in African jungles, not South American ones, which causes him to disappear in a puff of logic. In another segment, infiltrating the underground fortress doesn’t involve any matter of punching or even sneaking. Instead you need to distract the guards through other, goofier means. To get past one of them, you need to deliver him a breakup letter from his girlfriend, causing him to become too distraught to do his job. And while the beginning of the game seems to set up Faye as a potential love interest for Joe, instead he ends up hooking up with Azula, the Amazon Queen.

It’s certainly got a good sense of humor, although the dialogue isn’t quite up to Monkey Island levels. Still, even if the writing is missing that certainly witty snap, it’s well sold by the cast of voice actors. Joe has an almost ridiculously thick Brooklyn accent, and approaches each halfway ludicrous situation with a certain amount of innocuous bravado. Most of the artwork is, again, in the style of Monkey Island, although the comic book style close-ups during cinema scenes are far from attractive. The interface condenses the actions into a series of icons, but only four items are displayed at once, and since you have a few dozen by the end of the game, it’s a pain cycling through all of them. The font is the same one used in many LucasArts titles, if the similarities weren’t already abundantly clear. 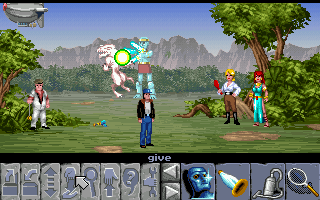 Flight of the Amazon Queen deserves far more respect than it gets. While Interactive Binary Illusions was reportedly in talks with LucasArts to publish their game in the United States, those plans fell through. Instead, they teamed up with Warner Bros, who shuffled out the game under the radar in small quantities. In some ways it’s understandable, since it was released in 1995 and looked a bit dated compared to other similar games of the year. But its look is ultimately timeless, and it definitely warrants an examination today. In 2004, it was released as freeware and is compatible with ScummVM. It’s also available for purchase on the iPhone and iPad.