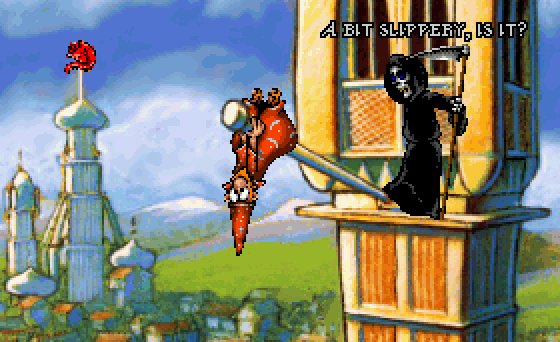 In 1992, a company called HorrorSoft (later Adventure Soft) attempted to buy the rights to Discworld to create a fully graphical adventure game based on the license. They didn’t succeed and instead made Simon the Sorcerer, which carried some of the same themes as the Discworld universe, but differentiated itself enough to stand on its own. A few years later, in 1995, two developers named Teeny Weeny Games and Perfect 10 Productions, were more successful, and released the first point-and-click Discworld game. 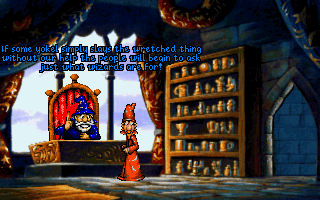 This game, simply titled Discworld (initially it was subtitled The Trouble With Dragons, although this was dropped from the final release) is adapted from the 1989 book Guards, Guards! It involves a mysterious (and not terribly bright) order of cloaked men who summon a dragon into Ankh-Morpork, in an ill-conceived plan to install their own king and rule the city. In the book, it was up to Captain Samuel Vimes and the City Watch to put things right, but the game does things differently. The members at Unseen University, home of some of the brightest wizards on the Disc (and a few of the stupidest), need to make some kind of effort to prove that they are not entirely useless. And so, the Arch-Chancellor elects Rincewind for the job, mostly since no one would miss him if he screwed up. Rincewind is one of the most popular Discworld protagonists, which makes him well suited to be the star. Beyond the initial set up and a couple of the situations, the game really doesn’t follow the book that closely, although reading it makes a fine accompaniment.

Even if you’re not familiar with the novels, the game serves as a fine introduction to the Discworld universe. Every time some bit of background lore pops up – for example, the question as to why the librarian is an orangutan – a nature show-style narrator appears and explains it, complete with diagrams. Although Pratchett’s involvement in the game was minimal, most of the silliness is maintained, whether it be jabs at Rincewind’s incompetence (and his girlish wizard robe) or long, silly, roundabout conversations that don’t really go anywhere. Beyond Rincewind, there are a number of familiar faces, including Lord Vetinari the Patrician, the not-quite benevolent ruler of Ankh-Morpork; Nanny Ogg, a kindly witch with a thing for custard; and Dibbler, a slimy salesman who peddles some of the most questionable items known to mankind. When getting involved in precarious situations, Rincewind will be stalked by Death, a rather pleasant chap who SPEAKS DRAMATICALLY IN ALL CAPS, although since there’s no way to die or get stuck, his taunts are largely for amusement. There are a number of other characters that pop up who aren’t explicitly named (including the members of City Watch) but will ring some bells with fans of the books. There are bits of fourth wall silliness, like the utterings of Rincewind when you keep poking him with the cursor (he’ll eventually get agitated and take it away for a few seconds, before reluctantly relinquishing it) or he’ll peer into the screen and yell a wake-up call if you let the game sit idle for too long. 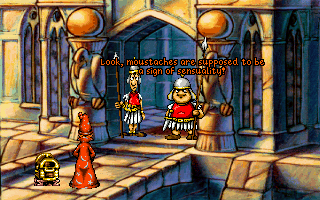 For as deviously funny as it all is, Discworld is hard. Very hard. A good chunk of the difficulty comes from the rather freeform nature of each chapter, wherein Rincewind is sent to scour for half a dozen random objects or so. There’s rarely any clue to where these objects are located, and sometimes their use isn’t even apparent when you do find them. Plus, Ankh-Morpork is not a small city, with new areas constantly opening up, and each location usually consists of a handful of expansive screens. Things get even more confusing when you enter “LSpace,” an alternate dimension (sort of) set approximately twelve hours in the past. That’s a lot of ground to cover, especially since obtaining one item usually requires getting other items or solving another puzzle somewhere else. Furthermore, the game never really leaves the city, and things change in each location after each act. It’s fun to go around and see what’s different and what new conversations you can have. It’s not so fun to go through the same screens tediously combing them over for stuff when you’re stumped.

And then the puzzles themselves are also quite nasty. For instance, in the second chapter, you need to hunt down members of the evil order and steal an item from them. You find one of them in a street, wearing a belt, and munching on some snacks. In the alley next to him, there’s a toilet, and earlier in the game, you saw someone munching on a bag of prunes. At this point, the solution should be obvious enough, but no, the designers went several steps further. Before you give the man the prunes, you need to steal some of Nanny Ogg’s “love custard,” grab an octopus, and shove both down the toilet. Then, once you’ve fed the prunes to your mark and he heads to the john, he’ll be unspeakably ravaged, and the belt is yours. That’s all somewhat amusing, but it’s also way too complicated. 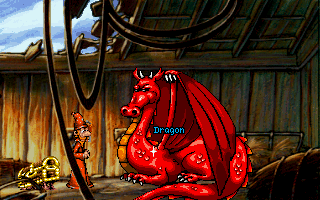 Then there is the kind of puzzles that you just sort of stumble into. In the third act, your goal to find several “heroic” objects, one of which is a mustache. During the course of the game, there’s a running gag that whenever anyone gets knocked over and stunned, they proclaim “Did anyone get the number of that donkey cart?” It’s not too funny, except later, when you come across a donkey and his donkey cart. They seem innocuous enough, but the license plate on the cart is smudged. You need to go through an elaborate series of hoops to clean off the plate, get the number, intentionally injure someone, and when they recite that annoying joke, you’ll find that the donkey in question has been arrested. At this point, you’re supposed to steal the scissors from the barber, snip the donkey’s tail, and… there’s your mustache!

It’s true that an element of British humour is its unending amusement with the terrors of bureaucracy (Douglas Adams helped design an Infocom text adventure by that very name, it’s quite good), and the inane puzzles that adventure games, especially this one, put you through for the most random objects, fits in nicely with that. It’s all well and good in concept, but when you ask a player to go through all of these ridiculous steps in a game that’s supposed to tickle their funny bone, not send them wandering around in confusion for several hours – well, that’s an amusing bit of tragedy, really. 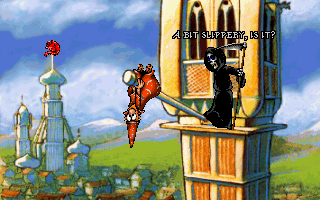 One could surmise that the overwhelming puzzles were the works of amateurs – LucasArts games could be devious but never quite to this level – but the rest of the game proves otherwise. The painted background artwork is consistently fantastic, although they get old when you trudge through the same streets dozens of times. The character designs and sprite work are excellent too, capturing the silliness of the universe quite well. The music is grating and repetitive, but the voice work in the CD version is absolute top notch. Rincewind’s voice is provided by Eric Idle, and he can make the most mundane lines seem absolutely hilarious. Many of the secondary characters’ voices are supplied by Rob Brydon (a standup comedian), Jon Pertwee (one of the Doctor Whos), and Tony Robinson (Baldrick from Blackadder). The only problem comes with the overtly repetitive voice clips. After spending hours trying to use items together ineffectively or interacting with useless stuff, Rincewind’s endless musings of “That doesn’t work!” and “Nope! I can’t shift it!” grow nightmarishly tiresome.

The interface is devoid of icons, as a single click on the left mouse button will command Rincewind to walk, a double click will tell him to interact, and the right mouse button will command him to look. Conversations are held much like Sam and Max Hit the Road, with options to ask a question, tell a joke, make a comment, or ask about specific items or concepts. Rincewind’s inventory is extremely limited, but he’s followed around by his faithful Luggage, a sentient (although not terribly bright) multi-legged chest with infinite storage space. It’s quite a clever way to integrate a story element into traditional adventure game design. 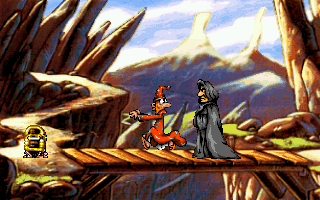 All in all, it’s hard to hate this game – it’s quite clever when it’s not provoking frustration, and it’s a damn fine rendition of Pratchett’s books. But it really needed a lot more direction – and less convoluted puzzles – to make it work, leaving this one for the experts only.

Beyond the original PC release, Discworld was also released for the Saturn and PlayStation. They replicate the VGA graphics of the computer version perfectly, and while the point-and-click interface is a bit fiddly with the controller, the PlayStation version is one of the very few games to support the mouse peripheral. The loading times aren’t quite as fast as the PC version, though, although they’re still bearable. The Tinsel engine is supported by ScummVM, so the DOS version is easy to play on a modern PC.