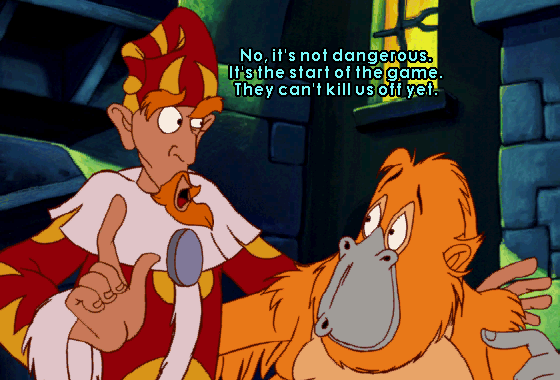 Discworld II finds the Disc in an unfortunate situation. Death has apparently taken a vacation, leaving the Disc’s residents unable to properly die. Immortality might seem enticing, but here, it doesn’t quite work as expected – instead of simply living forever, the dead shamble onward as either zombies or ghosts, and none of them are too happy about it. And so, once again, Rincewind is tasked with saving the day. The basic concept is (very) loosely based on the novels The Reaper Man and Mort, with a variety of subquests consisting of a mishmash of several books, including Lords and Ladies, Moving Pictures, and Pyramids.

The first Discworld game looked already damn good, but this one kicks things up several notches. The graphics have been upgraded to SVGA, using cartoon-style cel graphics for all of the characters. While the art style has changed a bit from the last game – Rincewind isn’t quite as cutesy, in particular – it still looks completely fantastic, and stands only second to The Curse of Monkey Island in regards to high quality 2D visuals. The animation isn’t quite as solid, although it does fix some niggling issues found in other games. The only major problem with Curse was the way Guybrush’s sprite scaled, often looking quite jagged when viewed from certain perspectives. Discworld II sidesteps that by using about half a dozen versions of Rincewind’s animations that change depending on his location, rather than using sprite scaling, for an effect that’s not exactly smooth but looks a bit more pleasant. All in all, it looks quite a bit better than the Channel 4 animated series. Eric Idle returns as Rincewind, and while the rest of the cast is totally new, they still do an outstanding job. Unfortunately Christopher Lee, who provided the voice of Death in the animated series and made-for-TV movies, is missing from the cast. 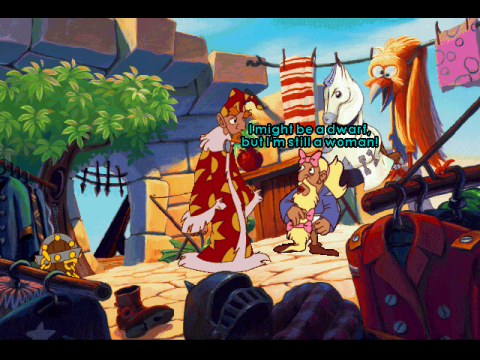 This sequel openly acknowledges the complaints about the previous game and fixes nearly all of them. The interface feels less fussy, and there are dozens upon dozens of comments when you misuse items, thus avoiding the issue of repetitive quotes. The Discworld feels much more fleshed out here too. The first title set roughly 80% of the game in Ankh-Morpork, while this one spreads out its wings much more, letting you visit Djelibeybi (the equivalent of Egypt), XXXX (a strange take on Australia), and Holy Wood (that one is more than obvious).

Each act still involves hunting down a series of seemingly pointless items – quests which Rincewind will complain about while facing the screen – but it’s actually a lot more focused. The game world isn’t nearly as expansive as its predecessor, and since double clicking on an exit allows for quick movement, it makes traveling between areas much faster too. Although there’s still a fair share of bizarre puzzles, there are plenty of clues in the dialogue to help figure out the solution

One of the first objects you need to find is a stench. Well, one of the men in the Shades has such a foul smell that it’s taken on a physical form. Right next to him is a store selling a genie bottle, but even that can’t quite hold it. Just toss in a shoe to absorb the odor, and you’re set. Similarly, another task is to find some mouse blood. It’s easy enough to find a mouse, but since Rincewind’s far from a murderer, you need to resort to more roundabout plans. Just walk around a bit and you’ll find a miserable vampire – all you need to do is find some way to steal his fanged dentures, and you’re set. All in all, the puzzles are pretty well designed, and not nearly as complicated nor as infuriating as the first game. 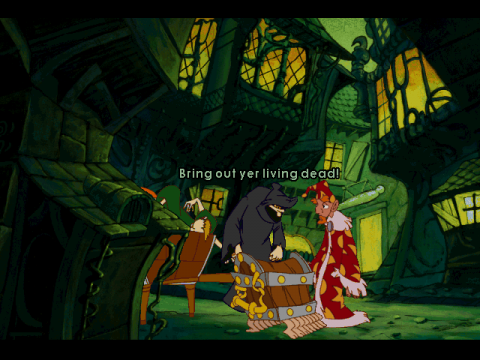 The opening credits feature a jazzy nightclub-esque song and dance number sung by Eric Idle (and performed by a skeleton) entitled “That’s Death!” whose jocular and, quite frankly, morbid tones might elicit memories of “Always Look on the Bright Side of Live” from The Life of Brian. That’s far from the only Monty Python reference, of course, with one scene elaborating on the difference between “parroting” and “parodying.” The writing is still high quality and the story takes a notably silly turn around the second act, where you need to take a number of steps to help Death star in a “flickie,” the Discworld version of a movie. The film that they make up… well, it’s certainly about as stupidly far from The Seventh Seal as one can possibly get. The final areas feature Death’s abode, complete with a snotty butler, a rather effeminate bedroom, and a particularly bratty (and inexplicable) human granddaughter.

The only major problem with Discworld II stems from its brevity – the game’s not nearly as huge, nor as long. It feels rather rushed by the ending, too. For awhile, it seems like Rincewind is going to take over Death’s position, which could’ve made for a whole interesting chapter, but instead it just tosses in an epilogue for something almost totally unrelated, and so the ending seems a bit disappointing. That doesn’t overshadow the rest of the game though, which is easily everything the original game should have been, and absolutely essential adventure gaming. 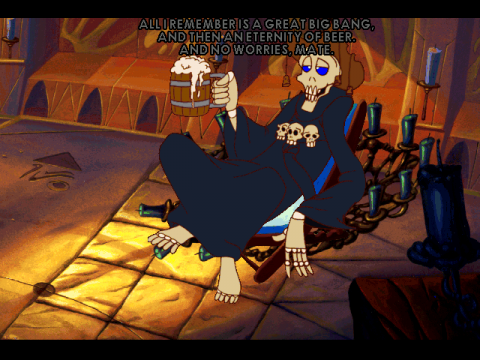 In its original European release, Discworld II is subtitled Missing Presumed…?, a play on the phrase “missing, presumed dead”. Psygnosis, the game’s publisher, must’ve felt this wouldn’t work in North America, so it was changed to Mortality Bytes! In addition to the PC release, it was also released for the PlayStation and Saturn, although the Saturn version was only available in Europe. The console versions suffer a downgrade to VGA level graphics and additional load times, plus they only come on a single CD, where the PC version comes on two. This means the cinematics are more compressed, another mark against it. The PlayStation version supports the mouse once again, but since ScummVM supports the PC version there’s really no need to muck with the console ports.