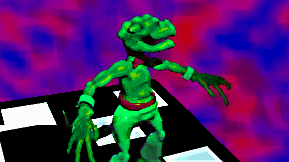 SCI’s Kingdom O’ Magic is about as close as anyone got to a Monty Python skit in video game form. Oh, sure, they were actual Monty Python computer titles, but most of them were barely games. And while the likes of Discworld and Simon the Sorcerer did a pretty good job of fulfilling the “wacky fantasy humour” quotient, they don’t quite capture the anarchist Dadaism of the famous British troupe in the same way that Kingdom O’ Magic does. It was designed in part by Fergus McNeill, who also developed a handful of parody text adventures back in the ZX Spectrum days, including Bored of the Rings and The Boggit.

The heroes of this sublimely silly adventure are Shah-Ron, the absurdly buxom and incredibly clumsy female barbarian, and Thidney (should be “Sidney”, but he’s got a lisp), a giant ugly talking lizard. At the beginning, you are presented with the choice of three different quests. The Good Old Fashioned Traditional Quest is purportedly the easiest, and involves the slaying of a big, nasty dragon. The Magnificent 7-11 Quest puts you on a journey across the kingdom to draft between seven and eleven warriors to defend the kingdom. And the Bizarre and Slightly Twisted Quest tasks you with saving the world by hunting down the Lost Lava Lamp of the Ancients and saving the entire world by destroying the Dark Lord.

Once you’ve made your selections, it becomes clear that Kingdom O’ Magic isn’t a straight adventure game so much as a low level role-playing game in adventure game trappings. It uses a standard point-and-click interface, and there are lots of items to grab and characters to converse with, but ultimately the game is less about solving puzzles and more about running fetch quests.

The core of the experience, though, lies in the comedy. One of the first objects you can find is a cellphone, which can used to dial the official hint line for a clue, at the cost of a single gold coin. The manual is more of a joke book than a legitimate guide, as the troubleshooting Q&A uses the opportunity to go off on ridiculous tangents. (“I was really looking forward to Kingdom O’ Magic. Imagine by disappointment then, when I discovered I couldn’t bring my wife to climax.”) Even the interface is comical – upon confirming an action, you are asked to respond with “Yes, I know what I want!” or “No, I am filled with doubts.”)

Examining any of the characters will bring up their data sheets, including hit points, their items, their serial numbers and where they were manufactured (as if they were action figures), and some kind of useless special skill (“Maths!”, “X-Ray hearing!”). Most of the major characters are invincible, as occasionally denoted by their HP reading “IDDQD”, also known as the God Mode cheat from Doom. Yes, there are lots of exclamation points. The game is just that exuberant. Common fantasy and RPG tropes are mocked ruthlessly. The elves are sissy weird-looking weenies who gather in a treehouse. Dwarves are stout little jerks that can think (and speak) only of war. Orcs are dressed in American football helmets and speak like proper British gentlemen. Ring Wraiths are fearsome but confused, because while they seek out Magic Rings, there are none in the kingdom, rendering their existence pointless. Other character types are perhaps even more bizarre, like the paranoid ninja baker, or the funky King Afro. Locations include the land of Riverndull and the Kingdom of De-Lorean.

Parodies aside, it’s simply a damned weird game. Instead of politely climbing up a ladder, Shah-ron does a fancy backflip complete with Bionic Woman sound effects. In the countryside, you come across an elevator in the side of the mountain. Press the button for the top floor and the compartment will rocket into the sky, out into space, and calmly explode. One of the major quests involves infiltrating a nightclub and winning a disco dance contest. Your quest to kill the dragon isn’t fulfilled by finding a magical sword or anything, but rather putting a hit on it with the Elvish mafia.

But while it’s a hilarious game, it’s a huge pain to actually play. The kingdom is absolutely huge, consisting of nearly a dozen major locations with a wide wilderness connecting them, and almost a hundred screens in total. It’s an open experience, one that’s meant to simulate an actual world rather than tell a stringently linear story, but there’s no real direction, and the sense of aimlessness can quickly grow tiring. And there are tons upon tons of red herrings – the game world doesn’t really change based on which quest you’ve chosen, resulting in whole areas, characters and events which are completely unrelated to your overall goal.

Despite the nature of exploration, the rest of the RPG elements are really quite shallow too. At any given time, there are NPCs trotting around, some minding their own business, others looking for fights. Combat doesn’t involve anything more than sitting back and watching the combatants get into a cartoonish scuffle, complete with dust clouds and wacky sound effects, as the two life bars drain. Thidney is hardier and is better at straightforward combat, while Shah-ron has better magic spells. Certain tasks and dialogue also differ slightly, so at least there’s a whole lot to see and do.

Alas, the graphics have not aged well. They’re all computer rendered and run in clunky low resolution VGA. Character conversations are handled with gigantic close-ups, and nearly everyone in the universe is distasteful to look at. The voice acting is pretty good, with Scottish comedian John Sessions acting as Thidney, but due to the 70,000+ lines of dialogue, it’s all incredibly downsampled and difficult to listen to. 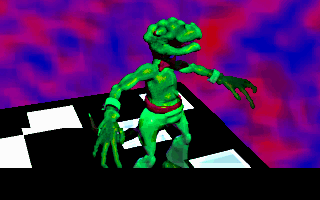 Sitting down with Kingdom O’ Magic with the intent of getting anywhere is a recipe for disappointment. Instead, it’s simply more fun to stumble around, talk to the different characters, and soak in the comedy. Once you’ve fully seen the game world, the tasks and their solutions begin to fall into place, and at that point it becomes halfway playable, despite all of the backtracking you need to do. At any rate, appreciation for this style of lunacy is an absolute prerequisite to get any enjoyment out of Kingdom O’ Magic, because that’s the only thing that will keep you going through its more tedious aspects.