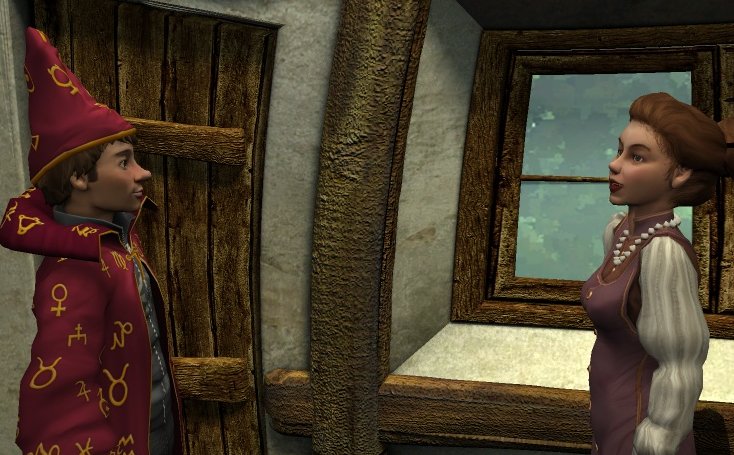 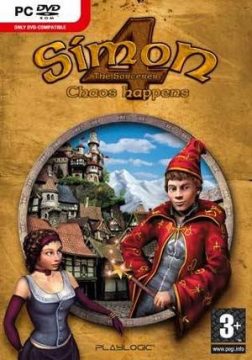 The crappiness of Simon 3D, combined with the generally lousy state of adventure gaming in the early 21st century, seemed to be the final nail in Simon’s coffin. That is, until 2008, when it was pried open by a German development team called Silver Style. It was probably produced to capitalize on the popularity of Harry Potter, despite them being largely dissimilar outside of the concept. The fourth Simon game was developed almost specifically to avoid the pitfalls of the previous game. 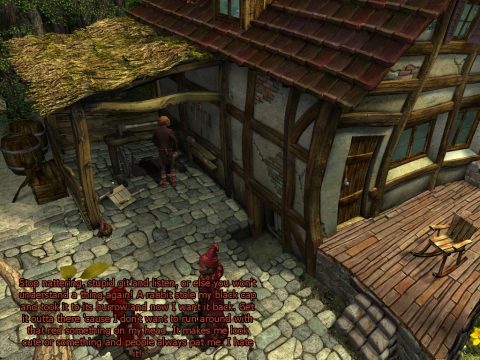 The point-and-click interface is back, using a single icon like most modern adventure games. The map allows for easy travel, and you can instantly change locations by double clicking on an exit. The static camera angle thankfully returns, with 3D characters on top of some beautiful high res 2D backgrounds that almost perfectly emulate the feel of the first game on a higher technical level. The character modeling is actually quite good too, even if it looks a bit too realistic given the series’ usual cartooniness, and some of the animations are somewhat off. The music, while generally subdued, is also quite excellent. It might’ve come five years late, but on the surface, this looks like what the third game should’ve been.

The story begins with Simon stepping over to the magical realm after having a dream about Alix, Calypso’s daughter. Simon’s clone from the last game has escaped from the Nexus, and has started living in the Magic Kingdom, assuming the identity of the real Simon. He’s clean, neat, and a generally affable guy – in other words, the complete opposite of the real Simon. Upon some investigation, the clone Simon is found to be working with the evil Calaba, a mustachioed midget who wants to kill the king and assume the throne for his own. While trying to save the king, Simon and his double end up screwing up the whole process, resulting in the duo, along with the king, getting vaporized and tossed into the Realm of the Dead. The second half of the game involves them working together to escape from the underworld, restore the king to the throne, and save the day once again. 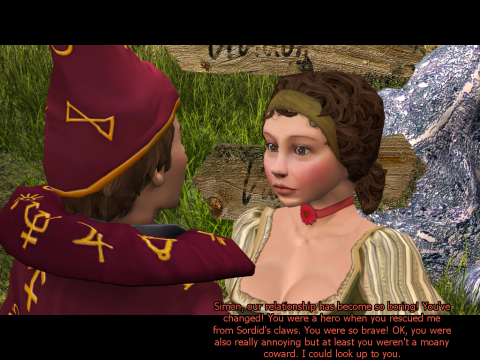 This sounds like the makings of a decent adventure. Unfortunately, it just isn’t very funny. Right at the outset there are a few issues. The running joke of the series is that Simon never actually cared about the Magic Kingdom – he just wanted to get home, and if he ended up saving the day in the process, so be it. (There’s also no real explanation as to how Simon escaped back to the real world at the end of Simon 3D.) Here, he’s genuinely concerned about the kingdom, which seems remarkably out of character. And why would he care about Alix to begin with, considering he previously regarded her with nothing less than antipathy?

Beyond this curiosity, Simon 4 isn’t all bad, as the storyline and situations actually aren’t that much different from the previous games. Beyond Alix and Calypso (who apparently died along the way and is now a ghost with Alzheimer’s), you’ll run into Goldilocks again, who’s still locked up in prison, as well as Swampy, who seems to be duped into thinking that the duplicate Simon has created a fan club for him. At the beginning of the game, you meet Little Red Riding Hood, who’s an obnoxious, skateboard-riding, backwards-baseball-cap wearing brat. In order to steal her skateboard to solve another puzzle, you need to get her eaten by a big bad wolf… except the only wolf in town is a pathetic washed-up drunk who needs to be gently coerced into the job. The Realm of the Dead features many classic Greek mythological characters, and it’s a bit fun to taunt Sisyphus just for the heck of it. The whole place is mired in bureaucracy, as you’re required to run errands for the overworked Hades, who sits at a desk overflowing with paperwork and is your sole ticket back to the mortal world. A lot of these events are amusing, but the core of Simon’s comedy has usually been the dialogue, and here, it’s a complete wreck. 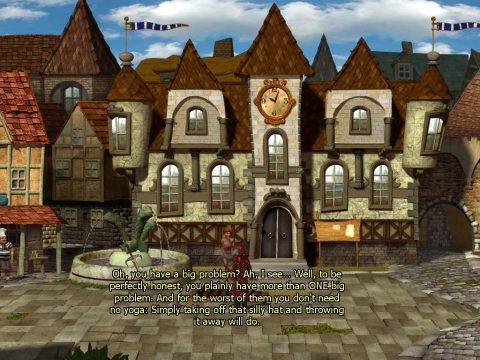 Almost all of the writing is awkwardly translated from German into English, resulting in long-winded conversations that feel like they’re trying to be funny, but end up totally getting lost. Worst yet, the voice acting is total rubbish. Simon the Sorcerer has always been a quintessentially British series, but here they chose to give American accents to everyone, Simon included. All of the dry wit that drew the fans to the series to begin with? Completely gone. Simon himself completely lacks any sense of sarcasm and meanders through most lines sounding somewhat confused. Simon’s double talks exactly like him, but slower. And forget the original voice of Swampy – here, it’s just some incredibly high-pitched squealing.

The puzzles, too, tend to be a bit uninspired. None of them are particularly difficult or frustrating, although the game has an occasional tendency to hide objects until they’re needed, at which point they pop up across the game world out of nowhere. At least Simon’s journal acts as an in-game hint guide to provide some direction. 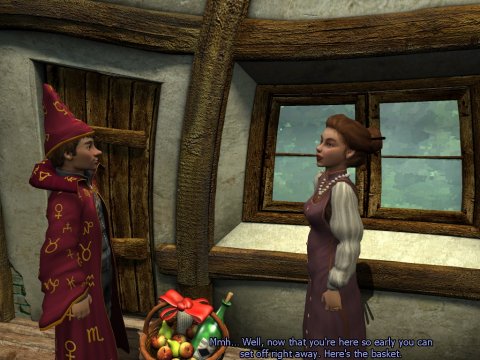 These puzzles are really the least of the game’s problems, though – it’s definitely the lack of humour that brings this one down. One could easily place the blame on the localizers, but according to some German reviews, apparently the writing wasn’t even funny in its native language. Regardless, Simon 4 totally loses its identity, and comes across as vaguely comical but largely generic adventure game. Simon and Mike Woodroffe are credited as consultants, but it definitely would’ve benefited from their larger involvement.