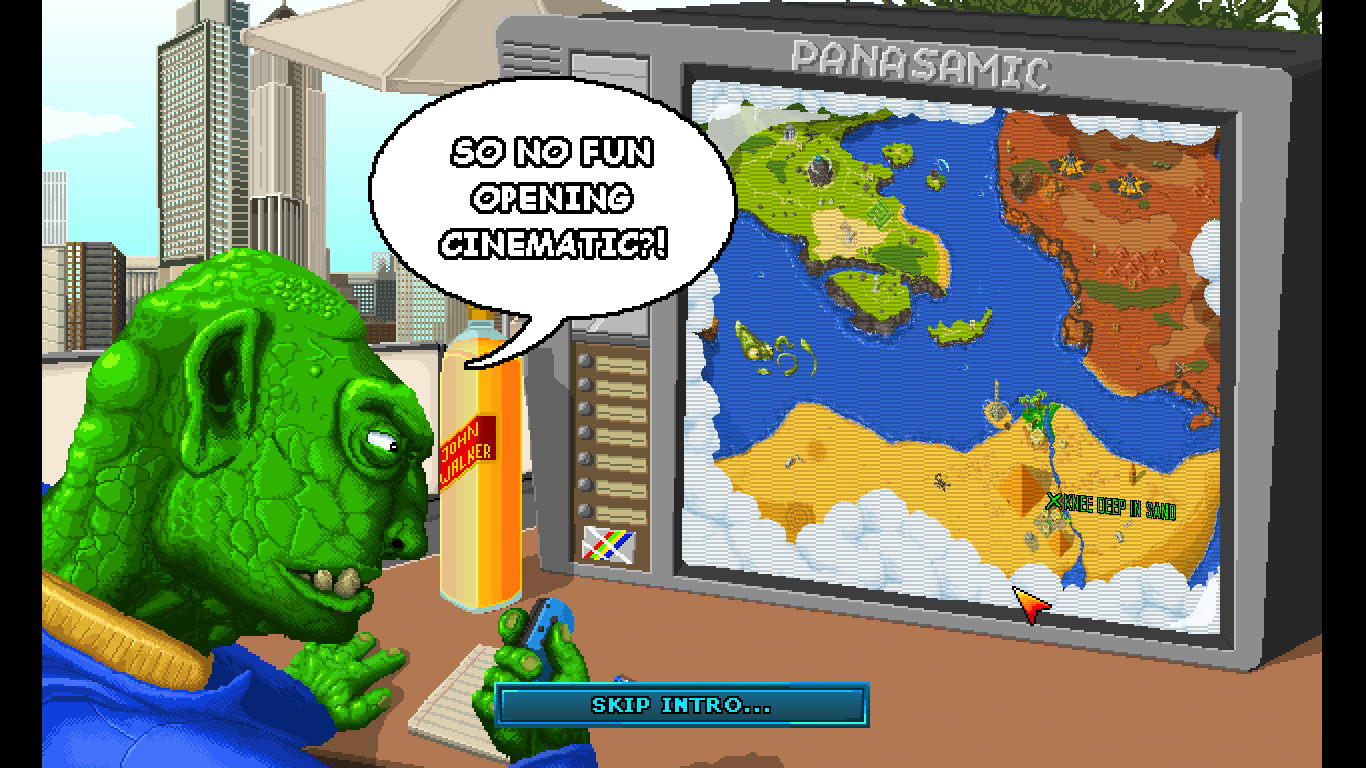 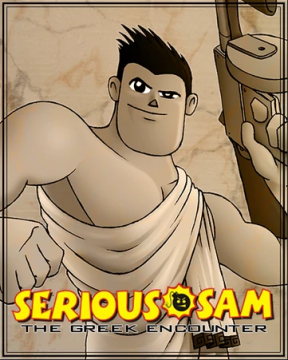 The Greek Encounter was the last of the initial wave of Serious Sam indie games, and it was probably the one that killed the original trend. It may have also ended the career of independent game designer Eric Ruth, whom you may have known from work on The Angry Video Game Nerd game, and a few odd spin-offs for Team Fortress and Halo, among others. It’s not good by any stretch but based on what we know about Random Encounter‘s rushed development, it’s safe to say Ruth didn’t get the time he needed to flesh out the small title. 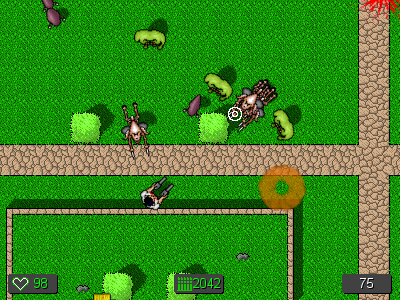 The Greek Encounter is a narrative lacking top down shooter that had Sam fight off waves of monsters, as usual, but it suffered from very poor environment design, seeing all characters straight down so as to hide most design details, and a difficulty curve more in line with the much harder difficulty levels in a mainline Serious Sam game. It’s hard to find now, for the same reasons as Kamikaze Attack, but doesn’t really have much value beyond being a proof of concept.

The game was met with almost universal negative responses (though most polite about it) and most likely changed Devolver’s handling of the IP. After 3’s rocky release and Greek Encounter‘s face plant, the series stuck to re-releases and remasters up until 2017, where things started up again.

Bogus Detour is easily the best of the Serious Sam spin-offs, even when compared to the very solid Next Encounter. Created by Crackshell, known mainly for the Hammerwatch series, with some help from Croteam, Bogus Detour took the basic concept of Greek Encounter and improved upon it in every way possible, creating thought out maps and colorful enemy designs for the top down chaos. John J. Dick even lent his voice to the project, making one liners played a fairly healthy amount through the campaign. 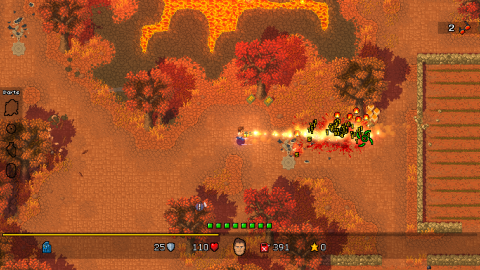 The story is basic Sam fair, with Sam starting by just finishing a fight and doing the things to get to Mental but then it never happens and his Sisyphean task continues on. It works mainly as a framework to connect the levels, moving with Nettie info dumps between maps, and props to the environment design guys for creating a lavish number of different places to explore and shoot up. The game is bright and colorful, overall a blast to experience, with plenty of effects and sound effects (many taken from the main games) to give everything an extra bit of polish. Enemies also transfer over to the top down structure well, with similar tactics still working in the new perspective, allowing the team to throw in new surprises here and there. Sam gets some pretty fun weapons this go, including bouncing sawblades and a laser beam, shaking things up.

Add in the leveling system, perks you can earn with collected stars, level secrets and touches like the great sprite art in stills, and you have a damn good game overall. The leveling perks are very welcome in particular, giving you a lot of options to play the game, including builds that focus just on the base pistols or surviving as a melee bruiser. It gives the title some replayability through these light RPG style elements. 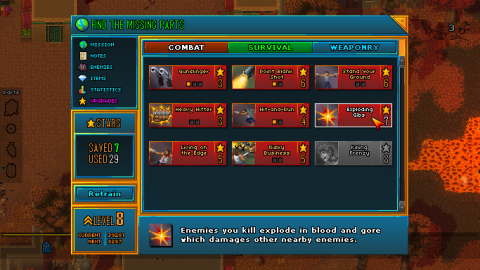 The only major issue is that if you’re looking for secrets, you will be annoyed how few there are in such ridiculously large maps, not to mention the use of keycards to gate areas. The use of keycards can be especially irksome, since maps can take up to an hour to get through at times, and the limiting of places you can go just feels to be an archaic addition solely to pay tribute to Serious Sam‘s inspirations. Due to all this, it’s definitely not a game you’ll want to marathon, but it’s great fun if you pace it out.

Something worth noting during Croteam’s dive into VR is the creation of an original Sam game exclusively for VR called The Last Hope. It has some narrative elements that wields together a few lore inconsistencies caused by 3, with Sam now being an EDF captain leading a space ship crew in a mission to stop Mental before the events of 3. As a result, it’s kind of important for laying out the groundwork of what the franchise story is now, but also is perfectly missable, a rare example of a VR spin-off being more than a tech-demo as far as its place in a franchise. 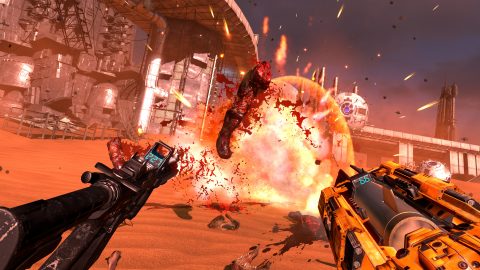 The game sadly has no non-VR modes, but is otherwise lore light and mainly a show off of what an FPS can do in VR, with a few new weapons to play with and a large list of enemy types. Doesn’t really add much to the franchise or re-invent the wheel or anything, but it’s a welcome entry all in all, and a solid example of how adaptable Croteam can be at times as developers. Sure, their attempts may often be a bit janky or lackluster compared to some bigger studios when it comes to applying technology to their games (especially with animation, but they do have game design chops and can more than make up for their limited resources quite a bit. It’s gotten solid reviews overall and seems to mainly be an offering before the proper forth installment. 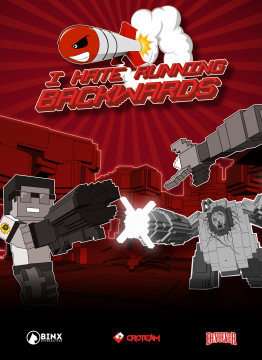 Somehow one of the more lavish productions and one of the most forgettable, I Hate Running Backwards is a Sam themed crossover game between a bunch of different Devolver properties, and it’s just an auto-runner shooting game where the gimmick is that you run backwards because Sam memes. It’s not a bad game, but it feels like something that should be on a phone or tablet, yet isn’t. It uses some stylish voxels, but the lighting is drab, and not much is done with the large collection of characters, which does include faces from Hotline Miami, the Shadow Warrior reboot, and Enter the Gungeon. 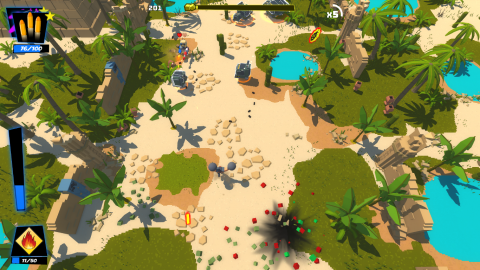 It’s a pretty repetitive and casual experience nowhere near worth the fifteen dollar price tag, sadly. It doesn’t have enough fanservice to please fans of any of these games, and it doesn’t have much going on under the hood mechanically. It’s pretty much just the worst part of a Serious Sam games, the running backwards, packaged as an easy cash-in meme game filled with familiar faces for more consumer buying potential. It’s probably the most nakedly cynical game Devolver has ever put out, which is bad since their core identity as a company is being outsiders who champion artists and game developers. It’s not particularly bad or offensive, but this does feel like the game that has the most trouble justifying its existence beyond cashing in for easy nostalgia and fandom dollars.

As of writing, Tormental is currently in early access and has a few fairly obvious shortcomings or content lacks that give that away. However, it’s promising even in its current state and might end up being as good as Bogus Detour. It’s a rogue-like with more original John J. Dick voice over, Tormental‘s twist has Sam ending up in an endless magical mind realm where he fights monsters and dodges traps in randomized dungeons. What sets it apart from other indie rogue-likes is the game’s fun, toy-like style. 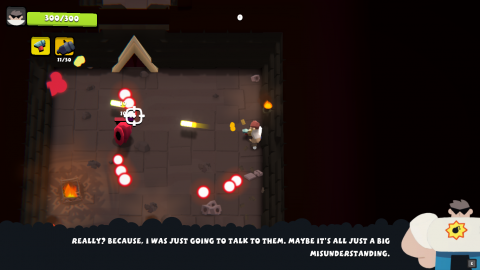 Everything in the game looks like it was made of a sleek plastic, giving the game more aesthetics in line with a cutesy Nintendo spin-off game than a Serious Sam gib-fest. It’s like the Link’s Awakening remake with less lighting and more focus on empty spaces and simple colors, and it works great. Otherwise, the game comes down to the usual rogue-like loop – find cool thing to kill thing, sometimes trade resources for other resources or weapons, die, repeat and get a bit farther than last run (maybe). As far as rogue-likes go, it’s a promising entry in the field, the only issue may be that said field is extremely overcrowded as of now. At least it looks different from the crowd, which can’t be said for the majority of its peers. Definitely one to watch.