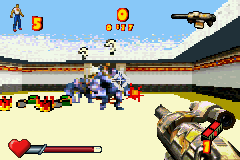 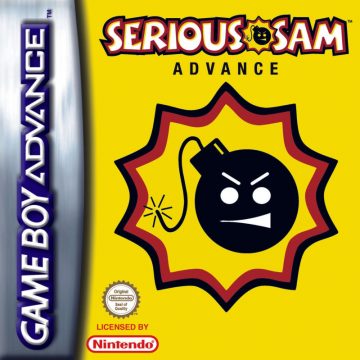 Writing about every Serious Sam game would eventually get old. It’s a series with a simple foundation that doesn’t deviate too hard from that, and when it does, it’s usually in small projects that are equally as simple in other genres. There’s only one of these spin-offs worth a full article, and it’s arguably the series biggest failure. 2004 saw the release of two spin-off titles for Sam “Serious” Stone, both made by Climax. Next Encounter was a mostly forgettable console FPS that just kept the series wheels turning as usual, but Serious Sam Advance was something ambitious that couldn’t ever possibly accomplish what it wanted to accomplish. It was a FPS on the Game Boy Advance, a handheld famously awful for 3D game development. Needless to say, it didn’t end well, but not due to a lack of some serious trying. 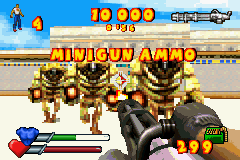 The story this time, now made completely non-canon with the ending of Serious Sam 3, takes place after First or Second Encounter with Earth scientists back in Sam’s time having figured out how to fully use the time-lock. They tried to scout for Mental in other time periods, only for a team to disappear and Sam having to go back to Egypt to look into things, the adventure ending in ancient Rome. It’s barely anything, but it’s a Serious Sam game on the GBA, so did anyone expect much?

The game is technically impressive for what it manages on the limited hardware. The use of color makes some subtle differences in atmosphere between the two settings, Egypt using a heavy amount of orange and Rome having a blue tint, and there’s even added sky and bits of architecture. Enemies look like weird sprite blobs from a distance, but show a good deal of detail up close, while Sam’s weapons look faithful to their original PC models. Even the double barrel shotgun has some solid reloading animation. The music is a bit blasted through the GBA sound system, but the actual compositions are solid enough. There’s even a four player death match mode if you have some friends and enough link cables. 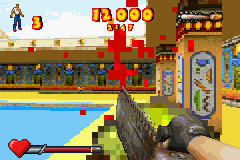 Unfortunately, working in limited hardware trying to make a faux-3D FPS carries with it challenges the team couldn’t quite overcome. Hit detection is the biggest issues you’ll notice the moment you try to shoot down some kamikaze, only to find a point blank shot misses. The game uses auto-aim, and if your aiming cursor isn’t using the “locked on” indicator, you will miss every shot you fire. This is bad when dealing with the kamikaze, who are *everywhere* and will give you a hard time.

This is made worse by the stiff controls. Serious Sam Advance uses tank controls, but with additional strafing with the L and R buttons that at least make the game playable and basic movement possible. It’s a very slow experience, but you can dodge fire and strafe around kamikazes with enough practice. Sam also turns about twenty degrees with a left or right button turn, which makes hitting enemies a good distance away a massive challenge only made manageable by holding down the B button so you can move slower for precise aiming (though taps also cycle through your weapons, creating some confusion at points). It’s a band-aid on a larger problem, the foundation here made of rotting boards that can snap at any moment. There’s actual, pretty bad framerate drop at points, which is bizarre for a game already this slow. 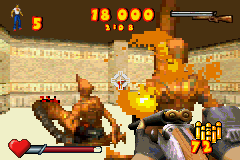 You can really feel the jank when you run into walls, as your speed will slow to a crawl, even if you can’t actually see the wall you’re stuck on in your field of view. You will need to learn to strafe quickly to deal with that. Things get even weirder with weapon issues, like rockets still tracking with your movement after you fire them out (splash damage beefed to make them more overall useful for enemy groups), or the changes made to the cannon. It looks absolutely massive on the GBA and actually cuts off a good deal of your field of view, but has an even stranger property change in that now cannon balls no longer roll around but bounce off the walls. This is not particularly useful and looks absolutely ridiculous. On the plus side, arachnoids now shoot fireballs you can dodge, so the developers were smart enough to realize hitscan fire would make this game impossible.

Something kind of neat here is that the game has unique enemies and weapons. Most of the enemies aren’t too memorable beyond the absolutely ridiculous Gunrilla, apes that have had their heads replaced with cannons. These should be in every Serious Sam game because go back and read that sentence and tell yourself that isn’t amazing. As for weapons, the set is mostly some familiar First and Second Encounter weapons (chainsaw, rocket launcher, minigun, ect) and the serious bomb switched out for a microwave gun that uses the model of the flamethrower, and two amusing new weapons worth revisiting. 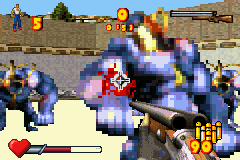 The first is the Rogue Prion Gun, which confuses enemies so they fire upon other enemies, but the execution isn’t great here. If you’re too close to an affected enemy, they’ll still try to target you, making the weapon mostly useless. However, the Time Strike might be one of the greatest ideas for a weapon in video game history. You press a button, and a piano or cartoon safe is sent back in time through the time-lock to land on the head of a targeted enemy, like you have a dedicated Acme supply delivery button. The existence of this ridiculous weapon that has somehow never appeared again in the series gives Serious Sam Advance some worth alone.

This wasn’t just some cheap cash-in game thrown out to sucker some money off the popularity of the GBA. Serious Sam Advance is a fully original title in the series with ideas never explore before, hampered by the miserable execution. There’s even a few Sam staples from the era, like the always present scoring system and the lives system the series was exploring with the console ports, and attempts at amusing writing in the short text cutscenes and Nettie info dumps at the start of levels. There was ambition here, but none of it was met beyond nailing down the Time Strike. Serious Sam Advance is an oddity in the series worth exploring once though level passwords, because a game with this much going on was not going to come with a save feature in a GBA cart. Thankfully, the password system is pretty easy to use. 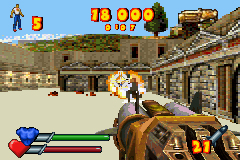 Croteam’s next big entry would finally come out the following year with Serious Sam 2, a big budget sequel made alongside 2K Games, and reception to that particular game is going to mark a turning point for the series.