The initial three Shantae games were primarily designed for portable platforms, with the console and computer releases done as ports. The fourth game, Half-Genie Hero, is the first game in the series primarily developed for HD platforms, with high resolution sprites and 3D backgrounds replacing the pixel art of the previous titles. However, it still uses the 2.5D perspective, and the game fundamentally plays the same. 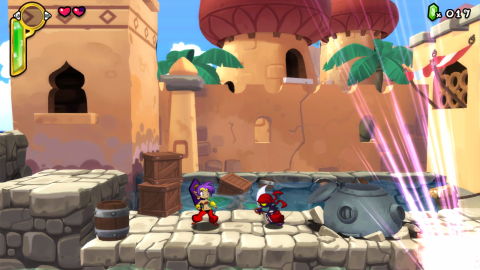 Taking place after Pirate’s Curse, Shantae has gotten her old genie powers back, but now faces a new threat to the Genie Realm, as foretold by a dream at the outset of the game. With her powers returned, the magic system works like the old games, rather than the single use items of Pirate’s Curse. With that, all of those pirate items are gone too. Owing to the focus on platforming, Shantae moves a little bit slower than in Pirate’s Curse, too. The levels have been slightly restructured in order to give the game a more arcade-like feel. Mirage Town is still the central hub  – the camera is even presented so you run around it in a circle, similar to the Game Boy Color game, though the viewpoint doesn’t change. After beating a level, you’re usually sent on a subquest to find other items, similar to the previous games. This requires replaying sections of a previous level to look for something specific, usually with a new power-up to reach other areas. 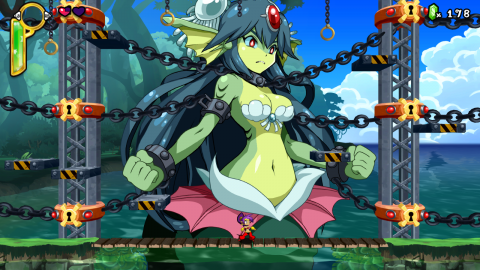 This is actually a little unusual, because it comes with both positives and negatives. In de-emphasizing the open world nature of the previous games, the level designs are more focused on platforming and other action elements. This is particular evident in the fourth area, which begins as a magic carpet race, before then moving into a fight with Ammo Baron’s fleet in the skies. So the first time you play a level, it’s much more engaging than in previous games. However, since you’re always required to revisit certain areas, it makes it more tedious to navigate, compared to the level designs of the older games, which were designed to be run across over and over. The game very quickly gives you a warp dance, which lets you zoom between the major areas, and of course there’s new areas to find (and a lot of hidden stuff), but it can’t help like feeling you’re just playing the same levels over and over again. 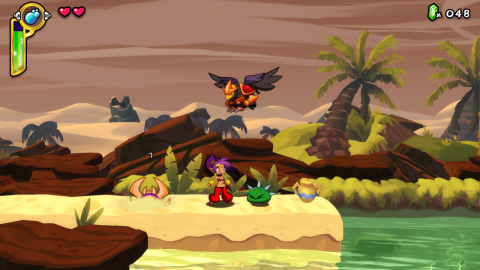 This seems to be a result of the game focusing on its high definition visuals, which are more expensive to produce. Half Genie Hero is pretty short – only six hours, and even with all of the retreading and optional quests, it can be beaten within a matter of a few hours. As a result, these elements feel more like padding, rather than a natural part of the game structure. Perhaps it would have been better to keep all of the level revisiting to the end of the game, rather than sending you to replay old stages after each one is completed. It doesn’t help that the game is completely missing dungeons, which were a welcome change of pace in the previous games. 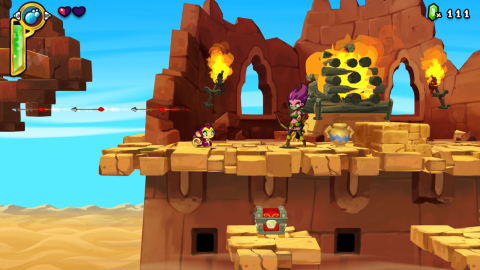 Still, the game isn’t exactly thin on content. Before the final level, you’re given the option to run some quests for some of the previously defeated Barons, none of which are mandatory but must be complete to get the good ending of the game. Some of these veer heavily into collect-a-thon territory (like grabbing the many “sunken souls” found hidden in the game), but the map screen is good about keeping track of how many items are present in each level and how many are left to find. You can also find items to unlock a humongous gallery, which includes a whole ton of art, both official and provided by fans.

There’s also a lot more transformations here, drawing back all the way to the Game Boy Color game. There’s the Monkey, Elephant, Crab, Mermaid, Spider, Harpy, Bat, Mouse, and Blobfish, along with some other dances with various functions, that let you turn into a Dryad to spawn fruit, or into a jug to spill out jewels. (There’s also a Tinkerbat form exclusively for donors to the game’s Kickstarter campaign, though it’s not nearly as powerful as it was in the original GBC game.) Among the new ones, the Mouse lets you crawl into tiny areas, though it’s only used in a few spots, while the crab lets you access underwater areas, at least before you get the Mermaid form. The Bat allows you to fly horizontally more easily than the Harpy form too, making certain areas a little easier. The Blobfish is more of a joke, that just turns you into a fat, ugly fish, though it’s needed for a quest. (A Succubus form, proposed during the Kickstarter, did not make it into the final release.) Not all of these are required to beat the game, but they do make some sections a little easier, so it’s worth it to hunt these down. 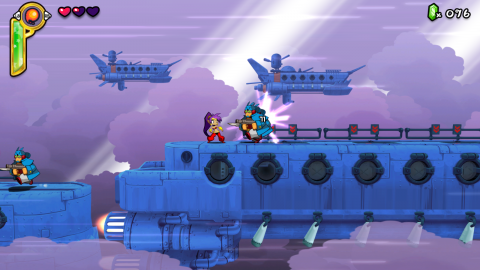 The visuals take the same approach as Wayforward’s Ducktales Remastered remake, but while the backgrounds felt stark in that game, here the artists have significantly refined their talent, so they look much more natural when contrasted with the 2D sprites. The cutesy new character designs are fantastic too, and just as smoothly animated as their pixel-based counterparts. Some of the bosses are absolutely gigantic too, to the point where the camera needs to zoom out to fit them on the screen. These are where the game looks the most impressive, especially the humongous (and gorgeously detailed) mermaid boss in the second stage.

The writing is just as silly as ever, featuring the same goofy villains, like the wannabe big boss Squid Baron, and introducing new ones, like Holly Lingerbean and her memory stealing worm, Fluffy. The subquests are just as silly, even if their chain of events is occasionally a little weird. For example, to please one character you need some candy, which are explicitly stated to be given by the doctor in Mirage Town. He won’t just hand these out (though he doesn’t tell you this) – instead, you need to do a seemingly unrelated quest for a different character, who will then reward you by giving you a “Sick” “item”, which the doctor will then treat and then give you the candy you need. Even for the quests that aren’t clear, you can get some hints from the folks in town. 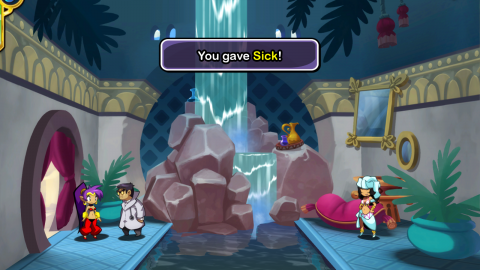 The music should also be familiar for series’ fans, once again provided by Jake Kaufman. It includes the usual remixes of old tunes, plus a new vocal theme, “Dance in the Danger”, sung for the opening level by Shantae’s voice actress, Cristina Vee. Given that the game lacks dungeons, it’s missing those slower, creepier themes, so overall the soundtrack isn’t as well rounded, but the main level themes are still as catchy as ever.

There’s also some post release DLC, finally giving players a chance to play as Risky Boots. This is presented as a retelling of the game’s events to her Tinkerbat crew from her point of view, where you play through all of the same levels as Shantae. Her abilities are different, with her main weapon being a sword, plus a few different types of pistol attacks. The subquesting is reduced as well, and instead there are two main types of collectibles in the stages: ones that will enhance your abilities, and others that are required to unlock the final stage. The stages are tweaked with different enemies and obstacles to better take advantage of Risky’s powers, plus the final boss is also different. Other than that, it’s not substantially different than Shantae’s run through the game.

There’s also a third mode as DLC, dubbed “Friends to the End”, starring Bolo, Sky, and Rottytops. This marks the first time that these characters become playable, and you can switch between them at any time, each offering different skills. Like Risky Boots’ mode, you play all of the levels over, slightly revised, with the new skillsets of the characters, though there’s a new final level and boss fight. Indeed, unlike Risky’s mode, which was a non-canon retelling the main events, this actually takes place within the frame of the main story, during one of the scenes where Shantae is knocked out of commission, and her friends must enter her mind in order to prevent her from becoming Nega-Shantae. 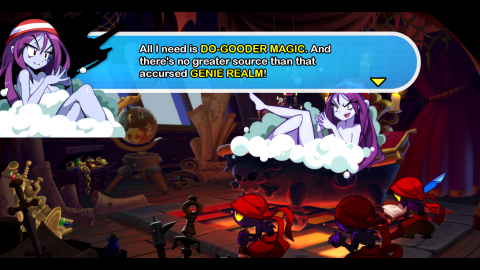 While Half-Genie Hero is gorgeous, and still filled with the same lovable world design and goofy characters that define the series, it can’t help but feel like it’s missing something by moving away from the open world format. And its change in level structure results in a game that, somehow, feels both too long and too short at the same time. As a result, it’s not quite as brilliant as Pirate’s Curse…but on its own, it’s still an excellent action-platformer.

Most of the console versions of Half-Genie Hero are identical. The Vita version runs at a lower resolution owing to the portable screen, plus there’s some missing minor visual effects and some added slowdown in areas, but otherwise it looks and plays very well. The initial retail release, published by XSeed, is called the Risky Beats edition, which comes with an outerbox and a soundtrack CD.