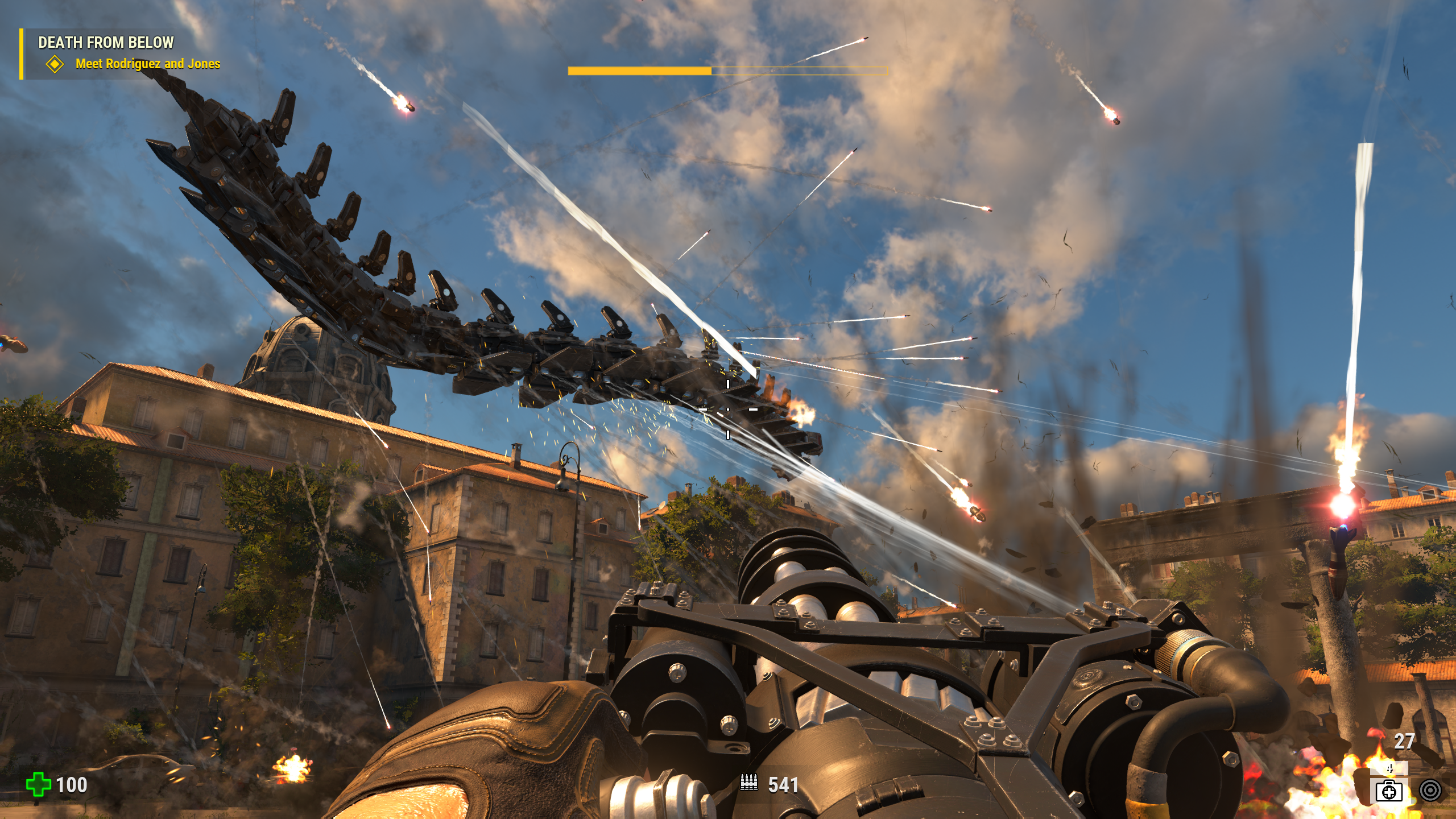 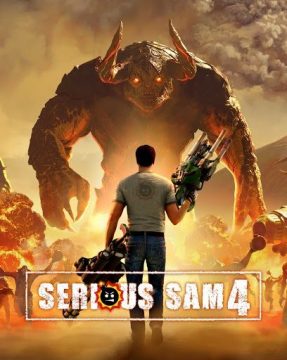 A lot has happened in a decade. Croteam had members leave and return, released a demo to show off some ideas they had for Serious Sam 4, realized those ideas were better elsewhere and made The Talos Principle, got the writers of that game to pen SS4‘s story, finally re-announced it as Serious Sam 4: Planet Badass, dropped the subtitle and branding a few months before release, and, due to money, the console versions were delayed for Stadia timed exclusivity. The marketing machine for SS4 was there but not as large as you’d expect, trailers being cagey with showing off details on what the game would contain. There were warning signs everywhere, plus some iffy word of mouth due to some review builds before the day one patch missing tons of content. 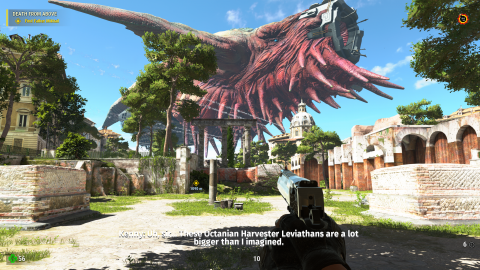 Put your fears away. Serious Sam 4 isn’t just good, it might be the single best game in the entire franchise, a smoothed out perfecting of just about every mechanic and design concept in the series with a surprisingly strong script and characters, with some of the largest fights in any game period, the first and last level (the first being a tease for the last) having 100,000 enemies on screen, just as promised (though they’re mainly props, it’s still very impressive). It’s not without some leftover issues from BFE, but you can really tell just how much Croteam have grown as a game studio, even keeping the amateur vibe of their past games with the constant borrowing of ideas from the big boys alongside their own shenanigans.

The game is another prequel…maybe? Serious Sam 4 is purposefully playful with its continuity, with nods to the time travel concept possibly affecting the current story, and it ends on a note that could go in all sorts of wild directions. The set-up is that we’re in the middle of Mental’s invasion, as Sam (now confirmed as a former space captain) and his crew travel the world in a play to find the holy grail and get a new weapon against the hordes. However, they have to deal with the general in charge of Mental’s European front, Lord Achriman, to get there. The team is tested in turbulent trials of combat, unexpected allies are found, and all set against the scenic backdrop of lived in European countryside and towns. 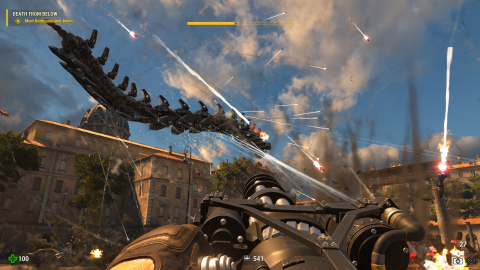 One thing that instantly stands out is the fixed tone issues of the previous games, settling on a 80s action movie cast set in a Phillip K. Dick style sci-fi story and using that both for comedy and straight drama. Jonas and Verena Kyratzes’s writing is brilliant in how much emotion is squeezes out of its stereotypical cast by just giving them moments to breathe and emote, not to mention the fun meta playfulness. It’s a carefully balanced mix of jokey fun and sincere character drama, complete with arcs, set up and paid off story beats, likable heroes, and moments of cleverness you’d never expect from this franchise before now. It’s still a very stupid time, but entirely with tongue in cheek and a little wink.

It’s difficult to describe how well the game manages to balance the goofiness of 2, the manly grimness of 3, and the new elements from the script writers, but the effect is clear when the ending credits have some of the cast shoot the shit, drink some beers over a fire, and mourn those who didn’t make it and it might actually make you feel things. Special mention must be made to John J. Dick, who gets to really show his acting chops and give one of the most one note characters in gaming some emotional layers nestled naturally in his normal himbo lines (“Gunfire isn’t a problem, it’s a solution!”). The whole cast does great work, including the hammy accents for the Italian and French characters, but Dick really steals the show, as he should. He’s even properly polite after helping a lesbian sniper couple in a French valley. 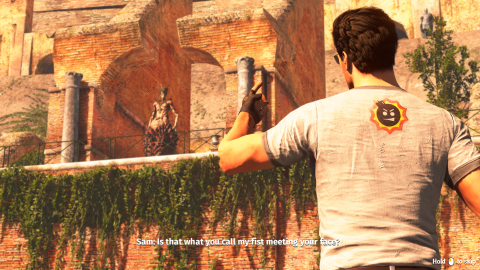 You’ll also noticed that Serious Sam 4 runs very weird compared to its contemporaries. Textures have a habit of popping in a lot more then usual for these sorts of games, and animations range from polished to barely existent. This seems to be a mixture of maximizing the engine for allowing as many models as possible on screen and helping the player read mobs better. The former can be seen in just how ridiculously big the mobs can get (even for this series), while the later becomes more obvious in play. Croteam has embraced their B-game status fully, despite flexing that they can do a more polished, traditional release, giving the game a personality that fits it well. Female gnaars are ape-like monsters with fluid, complicated running cycles, while the male counterparts move like their mannequin like forefathers from TFE. All the monsters get this sort of treatment, half moving fluidly, the other half stiffly, but that makes them more distinct in play, easier to pick out on the environments and among other enemies.

Character models also notably are lacking some detail (especially in the eyes with side quest NPCs and Sam himself when the camera shows behind his shades) but have some improved animations compared to Serious Sam 3‘s awkwardness. It helps make the cutscenes sell the illusion without the uncanny valley breaking you out of it most of the time. They know how to frame scenes to hide limitations when it really counts. The textures and naturalistic maps are the real star here, though, making these beautiful places that feel like they really exist somewhere right now. You then get to paint them in explosions. 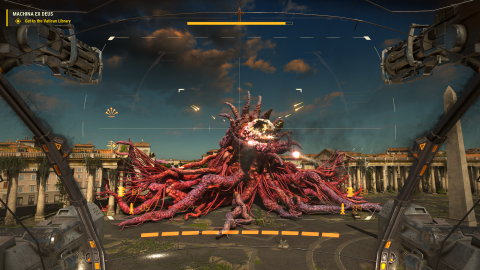 Despite the limitations Croteam is working with, they knew where to focus to make a game that feels truly big. They even worked in some fun call backs to the dark rooms from 3 and the computer bits from The Talos Principle in the second to last level, and actually made them work in the Serious Sam formula. It’s a game filled with variety unified by the excitement of seeing how things will be topped next. It’s a game with three mech segments and those still don’t feel like the biggest moments, to give you an idea how ridiculous things get, which is impressive when the first one has Sam starting off with a biblical paraphrase (the pope has a mech in this universe, and it starts up saying “and let god sort them out”).

There’s been a few changes to the combat to add oddly missing features in norm among other FPS games, all very welcome. You can now do bonus damage on enemies with head shots, and many classic weapons now have attachments you can get during the campaign. The shotgun becomes useful the whole game with the new grenade launcher attachment that lobs one out in an easy to read arc, the rocket launcher can lock-on to an enemy and shoot up to five rockets, the electric/laser gun can fire a Quake thunderbolt style death beam, and the grenade launcher can remote detonate fired grenades into smaller explosives that go off instantly. The rocket launcher’s new feature instantly turn it from one of the lesser launchers in FPS history into a major problem solver, a real standout among these attachments. 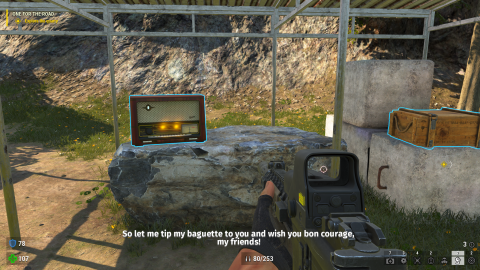 There’s also two new weapons that are quite welcome, an ammo eating auto shotgun great for weak but large mobs, and the mighty FRPCL. It fires homing chainsaws with explosives that take out as many enemies in its radius before finally exploding when it runs out of fuel. Ammo for it is scarce because it makes the BFG look like a pea shooter in terms of killing power. The real star here, though, are the addition of gadgets, ranging from isolated time slowdowns, a super mode buff, and even an isolated black hole. Heck, you even get life packs now, which are still balanced by some mobs being so massive and aggressive that you may not have time to whip one out. Also worth noting there are still moments in he story that take away all your gear, so don’t be stingy with those gadgets.

Serious Sam has also added a major element of modern FPS games in a mainline release with a skill tree, originally seen from their VR spin-off The Last Hope. You can get ten upgrade points in the campaign from S.A.M artifacts that can net you a variety of buffs and skills. While some are just basic quality of life improvements (shooting while sprinting, less damage from self-inflicted splash damage, ect), there are two major paths that change things up massively. The dumber one of them is a branch dedicated to melee kills, which nets goofy stuff like being able to use parts of the environment as weapons or mount certain enemies and use their powers or as faster transport. The one most will probably make a beeline for is the dual wielding branch. You start with light weapons, then medium, then heavy, then can mix and match. You can also use both fire and alt fire to control each gun separately. What this means is that you can fire them at the same time for piled up one shot damage, or alternate for better fire rate. This get very stupid very quickly with this perk, as you would imagine. 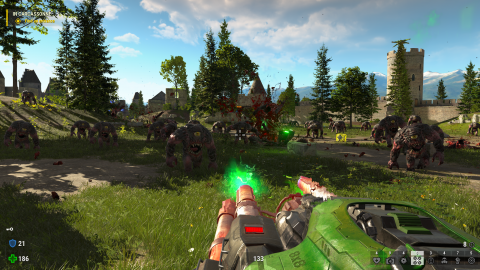 Lastly, you can also complete extra side missions during levels to gain all sorts of goodies, and it’s in these where some of the most memorable mobs are placed. The game is also filled with monsters from past entries, and some are modified so they fit in better with the sci-fi theme, like the DOOM prototype immigrants from 3. Some also have changed up attacks, like the dark brides now throwing things at you instead of grabbing you and leaving a trail when they move away instead of just going invisible. Also appreciated is that monsters formerly only weak to explosives can now be killed with anything.

The new enemies are also great additions. The anthropolyps are fantastic low tier additions, from the glass cannon processed humans that charge at you with metal claws in weird patterns but can be killed fairly easily, to the mildly tanky emetics that explode upon defeat and hurt everything around them. They spice up encounters way more then you’d expect, as do the haemovores (vampires that can turn into bats to zip around and fire ghosts that can briefly muck your sight) and kalopsy (smelly flying brains that fire homing shots and run away at the speed of sound when shot at via farts (yes really)). They all fit in naturally into the rhythms of combat and make what would have been fairly familiar spectacle feel new again. 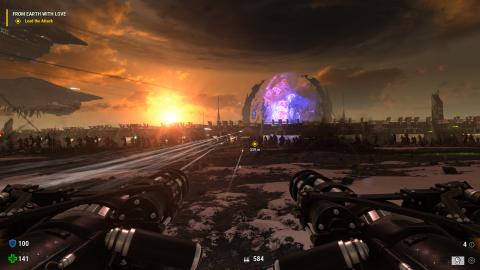 That’s the best way to describe the game, really. It’s the larger then life fights the series was founded on, with some meanness still worked into the overall more forgivable and balanced difficulty, and yet it sill feels fresh. There’s so much reverence for the past and yet it is all worked into a vision for the series that gives it new depth not just in its writing, but its play. The small additions add up into something no other game out there is offering, proof that Croteam are more then just mid level pretenders who sell themselves as a classic FPS on a budget. They’re the real deal, able to stand alongside the DOOM franchise in its own janky but charming way. Not even the weird jumping and return of awkward platforming secrets matter too much compared to all the game nails. Just be warned some PC players have had issues with technical performance, so be ready to mess around for awhile in the graphics settings if you’re experiencing slowdown.