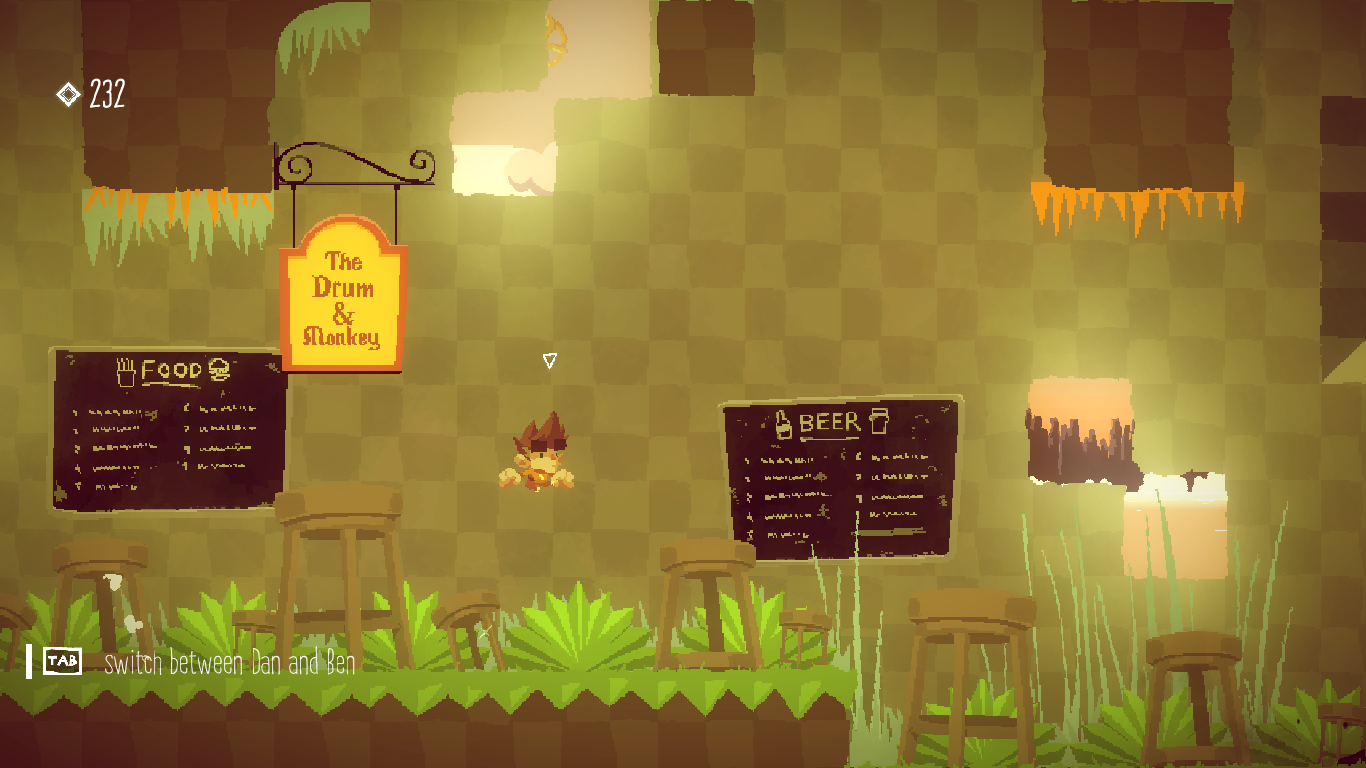 It has been eleven years since the last Ben & Dan game. Ben Ward and Dan Marshall’s send up series to the old LucasArts adventure classics went quiet, but Dan was still quite busy in the last decade, designing a multiplayer shooter called Gun Monkeys, heist game The Swindle, and a parody soccer game Behold the Kickman. His skills improved, and the duo got back together to create a new game in their signature series. However, rather than more of the same, the two got creative, and created a brilliant spoof of modern gaming tropes, the wild times we live in, and a ridiculously clever meta-leaning story that goes to some very unexpected directions. 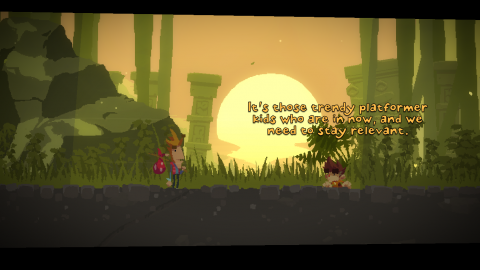 This go around, Dan has been upgraded to co-adventurer, due to his heroics during Time Gentlemen, Please! He and Ben have come to Peru to find a cancer curing flower, an adventure Ben is not enthused by but one Dan is all in for, wanting to be a modern indie platformer star and go on adventures with deep meaning and symbolism. After the two return to London, it has been engulfed in countless different apocalypses, and the two find themselves having to save humanity via the titular clockwork god. It’s an ancient computer that has protected humanity since times old, and it has somehow rebooted and lost its memories and function. Ben and Dan’s job is to go about its lair to find missing RAM and take part in constructs so it can learn more about humanity and properly safeguard them. This being a Ben and Dan adventures, things get a bit out of hand, though there is strangely no mention of Magnum P.I.

The gimmick here is that Ben and Dan now have completely different play styles. Ben controls like a classic point and click adventurer, though now with a modern, controller friendly interface that says when he can interact with something and gives a set of options you can cycle through with the mouse of a controller stick. Dan, on the other hand, is a modern day platformer, jumping around and not really interacting with stuff so much as moving past obstacles. The two have to work together to solve puzzles, Ben creating new power-ups for Dan, and Dan helping Ben get around, since Ben can’t jump or go down ledges. 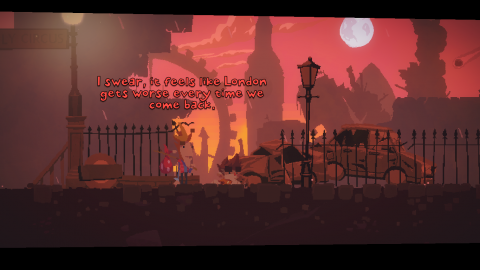 That’s how things start, but they get more complicated as you go through constructs. There are several sections where you can only use one of the duo, Ben’s in particular built around trying to overcome what would be simple stuff for Dan. There’s usually a gimmick to these segments, usually for a joke, and some of the later puzzles start getting creative with puzzle solutions.

Ben is an old foggy missing days long past, while Dan is enthusiastic in the new way of things, each having to deal with the challenges that come with the changing times. It makes for good comedic fodder, a lot of poking at modern indie cliches and game industry business practices, but it ends up going in a more nuanced direction towards the end and creates a proper character arc for Ben. It still keeps the snarky humor the whole way, but it’s smart in what it aims at. While there’s one iffy line with an indie dev parody at the start of the game, the majority of the gags do a good job at jabbing at those who deserve it, lampshading game design conventions, and most importantly, finding a good balance between embracing the new age and finding love for the old. Ben and Dan’s wildly different personalities help out a lot in maintaining this balance. 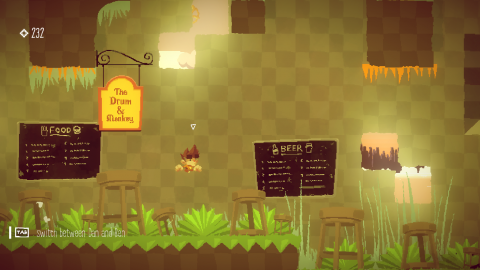 Lair of the Clockwork God is also more openly adult than its predecessors. It makes sense, as the duo have been away for a decade, and their previous audience has grown a lot in that time. The even more crass humor is appreciated, never overstaying its welcome, while there are bits of overtly political jokes that land well, including one great bit at the end of Feeling Old aimed at Ben and Dan themselves. Despite what the colorful new art style would suggest, this is very much not a game for children.

Speaking of, Dan Marshall’s design and artistic skills have improved tenfold since the Ben & Dan days of old, resulting in a beautifully animated sprite art game with strong color work and lively character designs. Tobey Evans soundtrack really compliments it, taking a series that previously barely had any music at all and giving it a moody, catchy, genre bending list of tunes. The main lair theme is especially memorable, and even flows into different versions as you explore the place and find new halls. 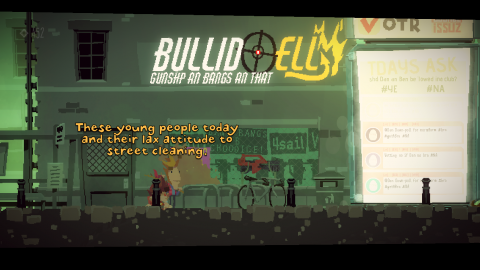 If the game has any faults, it’s that Dan’s platforming gameplay gives the game a skill ceiling that didn’t really exist before in the series. His early segments are pretty simple and have generous checkpointing, but they start to get frustrating during the last stretch of the game. His later wall jumping ability is also a bit finicky when mixed with the gravity change bits, and it can be tricky to remember which way you’ll go when you put in a direction input. Up and down gravity remain the same for the most part, but left and right gravity may mush your brain a bit.

On the bright side, Ben’s puzzles are more streamlined now, meaning you won’t have about three dozen items to cycle through during the final area of the game like previous. It’s not too difficult to figure out what you need to do, just remember that some later puzzles will need you to remember some of the quirks the game has. 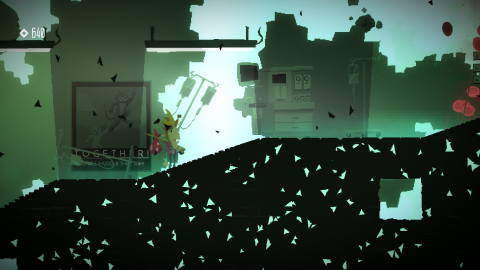 Many bugs were encountered during the playthrough, but they’ve been reported to Dan Marshall during the course of play, and most have already been patched out. You shouldn’t have to worry about anything game breaking, though some wonky platforming physics and an on-going issue where aiming with the gun in later levels locks Dan’s camera in awkward places may cause some problems. However, these flaws are pretty minor. Ben also gets an item with a vital function after the Fear construct that may not work at times, just remember not to wear said item after the construct and you should be fine. You can always restart a chapter from the chapter select in the main menu if you find yourself stuck.

Worth mentioning that purchasing Lair of the Clockwork God also includes a free copy of Devil’s Kiss, a parody dating sim set before any of the previous Ben and Dan games with a lot of tongue in cheek humor. 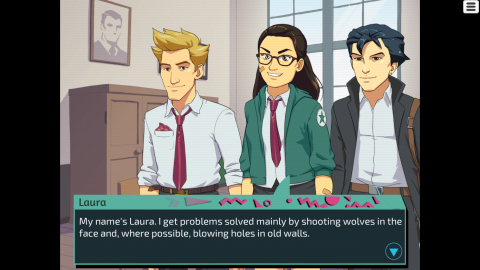 Lair of the Clockwork God is a fantastic bit of adventure gaming, a great genre blend with some brilliant bits of puzzle solving that chooses to advance the genre with experimentation. The hilarious writing and strong style gives it a soul, as do some of the clever puzzle solutions. Most importantly, it’s a comedy game that manages to choose its targets well, keeps a solid tone that never gets too venomous or mean, and paces out its gags at just the right pace. It’s a love letter to the indie gaming scene taped to a whoopie cushion, and a great deal of dry British wit that’s sorely been missing from the scene. If you can overcome the relatively low platforming skill ceiling in the later parts of the game, you’re in for a treat.