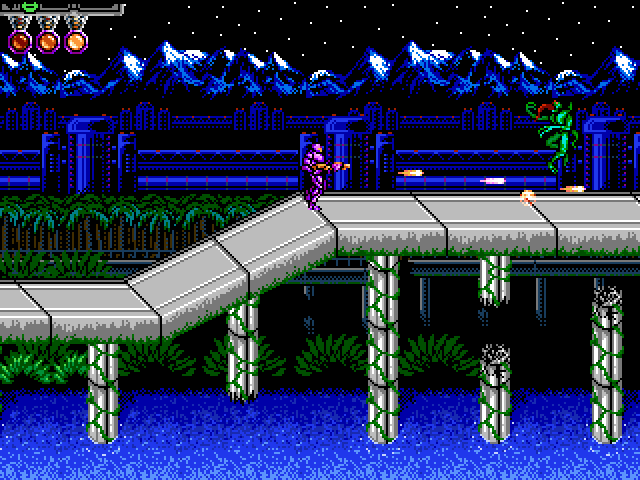 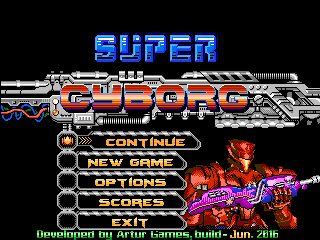 Contra was one of the most famous franchises of Konami and a game series that defined the run-and-gun genre as we know it. But for a long while, the company behind its creation, leaving for fans to pick up the slack. Released in 2014, Super Cyborg is a love letter to the Contra series created by Russian indie developer Artur Games. The game was released for Steam, Apple iOS, and was available as a regular PC download on Desura.

The game is most heavy based on the NES verison of Super C. As one can guess from the title, the player characters are combat androids rather than muscular shirtless commandos, an obvious nod to Probotector. In usual Contra fashion, your job is to combat swarms of vile aliens and save the world. A lot of other elements are borrowed from various installments of the series. Nearly all the weapons are taken directly from the NES version of Super C and each one of them can be charged up just like in Shattered Soldier. The player movement lock was lifted from Hard Corps for the Genesis, though cyborgs can neither slide nor climb walls. Jump control feels just as tight as in the first two games from the series. 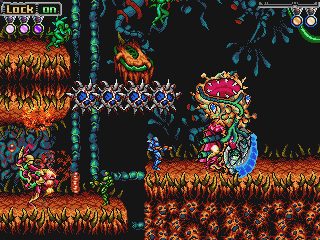 No Contra game would be complete without a two-player cooperative mode and Super Cyborg obviously features one. A netplay option is also included, although you might need a rather good Internet connection or else the gameplay suffers from severe latency, something you don’t want in a game where high accuracy is key to success, which is already harder to achieve courtesy of the second player.

Super Cyborg is pixel-art eye candy from top to bottom, its visuals wouldn’t be out of place in the 16-bit entries of the Contra franchise. Hard Corps inspiration is particularly apparent, with excessive explosions and creepy, detailed boss design. One of them is a weird creature with rocks for legs which uses an eye hidden in its rectum to attack, another one is a literal heap of guts spewing energy spheres – pixelated nightmare fuel incarnate. There are options to enable smooth rotation and transparency for sprites if the player wishes so, though it’s better to have them disabled for better retro experience. The audio also does a good job recreating the Contra atmosphere, most sounds are similar to those from NES games, with the default rifle being almost identical to the prototype. The soundtrack composed by renowned Russian demoscene musician Darkman007, though it technically does not replicate NES sound by any means, would fit any Contra game like a glove. 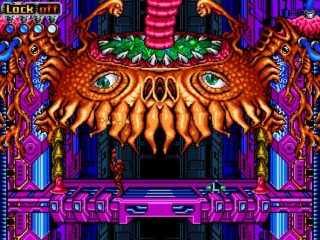 The only and biggest fault of the game is how it challenges the player. Contra games are hard for sure, but are fair, which can’t be said for Super Cyborg. The game constantly throws everything it can at you, giving the player barely any room for error or a few seconds to breathe, even on the lowest difficulty setting. The same can be said about bosses, whose attack patterns are almost impossible to dodge considering how player’s movement is limited, and may God have mercy on you if you don’t bring a Spread Gun to the final showdown, even if you’re a hardened Contra veteran. Good luck beating Super Cyborg without losing a single life in order to unlock the respective achievement!

To ease the burden a little, Super Cyborg saves your progress once a stage is cleared, but the drawn-out status screens seen after continuing might become annoying after a while if you lose time and time again. When things get too troublesome, one can also resort to a 40 lives cheat, entered almost in the same sequence as the famous Konami Code. 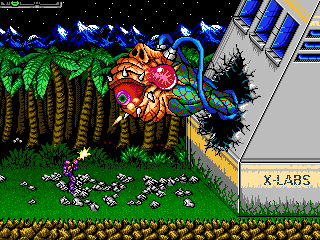 One has to admit that Artur Games put a lot of effort into replicating the gameplay of the poster child of run-and-gun games. Only the toughest ones will prevail through this brutal gauntlet and newcomers are most likely to drop the game after reaching the third stage. If it weren’t for that, you could slap a Konami logo on Super Cyborg’s title screen and no one would notice it’s a game made primarily by a single fan.