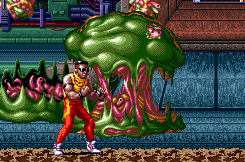 In the year 2050…Bio-chemistry and genetics has surpassed even our own imagination! A scientist who had been working on bizarre genetic experiments is banned by his Superiors and suddenly, his bio-chemical laboratory collapses in a massive explosion. Years later, people become vulnerable to the same genetic virus…creating a nation of mutants…THE MUTATION NATION. Can you stop the mutant invasion?

Unfortunately the invasion wasn’t stopped between when the game was released in Japan and when it came to the Neo Geo system in the US, since the back of the US box informs us that:

The Slum…an area of town completely forgotten. No one could imagine the cruelness suffered by innocent people who were transformed into horrible mutant creatures by genetic experiments. They hovered everywhere and completely controlled the town. We cannot tolerate them any longer!

Players take control of Ricky Jones and Johnny Hart. The former is designed to look like a biker, but the latter is way more dated in the best way. Johnny’s bright yellow muscle shirt, high stops and pants solidify him as one of the most early 90s characters in any beat em up. Despite his bright red hair fans would often think Ricky was an early take on Kyo Kusanagi, protagonist of SNK’s popular King of Fighters series. Various sites at one time or another even listed Mutation Nation as Kyo’s first appearance. While Mutation Nation‘s fireball-like special moves and fast attacks are vaguely similar to the latter character’s abilities, there isn’t a direct connection between them. Though coincidentally, Kyo’s design over the years has become much more similar to Ricky (save for the red hair).The thing that really stands out about Mutation Nation however is its graphics. The art is sharp and vibrant, a noticeable step up from Robo Army. It’s one of the better looking beat em ups of the early 90s and definitely the best looking on the Neo Geo from that decade. The enemy designs are all great as well. Each enemy is a human/animal hybrid monster, many appearing as normal humans briefly before mutating. The game’s bosses all look great as well and explode with a satisfying amount of gore when beaten.

Mutation Nation‘s biggest improvement, however, as well as its greatest strength, is its simplified but fun controller layout. In SNK’s previous action games we see a lot of experimentation with multiple attack buttons, various ways to level up characters, and simple but effective special move combinations. With Mutation Nation almost all of that is gone, with only a few but well thought out additions to replace them.

The back attack seen in Robo Army is gone here, replaced instead with a jumping uppercut. The game also lacks the dive attacks found in Ninja Combat and the separate punch and kick buttons found in Gang Wars, P.O.W. and Burning Fight. Despite the loss of these moves from SNK’s previous beat em ups, and it being reduced to a two button game, Mutation Nation actually has the best controls of any of SNK’s 90s beat em ups. The big improvement is that you can jump at different heights depending on how long you hold down the jump button. You can attack while in the air, and also do a move that can launch enemies by hitting attack and jump at the same time. Finally, the string of attacks you perform by hitting the attack button rapidly is much longer than in Final Fight and other early beat em ups. This lets you, with proper timing, unleash an impressive display of fisticuffs on your enemies very quickly, and also allows you to actually juggle enemies after they are airborne (prevalent in one on one fighting games but almost unheard of in side scrolling action games at this time). You also can defeat weakened enemies by getting close to them and tapping forward and attack. This lets you knee enemies in the gut so hard they fly away before melting or exploding. Finally, you can pick up a variety of special attacks. These are executed by holding down the attack button for a few seconds and then releasing it to unleash various devastating blasts of energy.

That may be a relatively small arsenal, but it makes for an experience that’s much more accessible than the more complex system’s SNK would shortly after add to each of its fighting game series. While Mutation Nation was quickly forgotten as SNK’s Samurai Shodown and King of Fighters series would debut over the next two years, it’s a great title to go back to both for nostalgia and as a text book example of a classic, polished beat em up for new players. Neo Geo fans that are only familiar with the system’s many one on one fighting games will be pleased to see a similar level of quality in this forgotten member of the system’s library.

So while Mutation Nation, like other SNK beat em ups lacks the extensive ways of grappling with enemies seen in its competition, it still provides a streamlined, easy to pick up game that’s very satisfying to fight through. Masahikō Hataka also delivers another fun soundtrack on par with his and Yoshihiko Kitamura’s similar work on Art of Fighting 2 and Kizuna Encounter. It’s a great follow up to the similar but less polished Robo Army, and it’s unfortunate that after releasing Sengoku 2 in 1993 SNK would abandon the genre completely until having Noise Factory develop a third Sengoku installment for them for release in 2001.