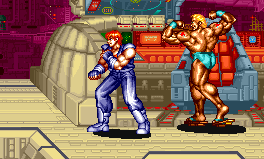 The recognized timeline of beat-em-ups started with Renegade, moved through Double Dragon, Golden Axe, Final Fight, Teenage Mutant Ninja Turtles and ends up at Streets of Rage 2. Despite the numerous quality beat-em-ups that were released afterwards, very few are acknowledged, despite their quality. Perhaps the big reason is that many of them came out too late in the systems’ life to recognized (almost definitely the case with Final Fight 3), but more often than not, many of these games remained exclusive to the arcades, and most of these never left Asia. 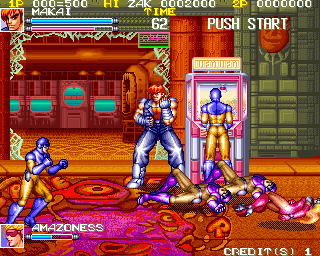 This is more or less the case with the Denjin Makai series. Published by Banpresto and developed by a team called Winky Soft, these two beat-em-ups were largely confined to Japanese arcades, with the first one receiving a rather obscure port to the Super Famicom. Both are well recognized for their large character rosters – six in the first, eight in the second – and number of special moves, greatly mixing up the “walk forward, punch dudes, walk forward some more” formula that typifies the genre. 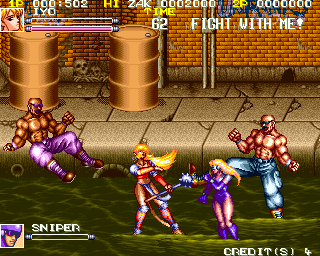 For the most part, Denjin Makai (“Makai: The God of Lightning”) looks and feels like pretty much every other arcade side-scrolling beat-em-up. You can run, block, and counterattack, placing it at a bit more advanced level than Final Fight. It’s also one of the few beat-em-ups with wake-up attacks, allowing you to recover from a fall without being totally surrounded. 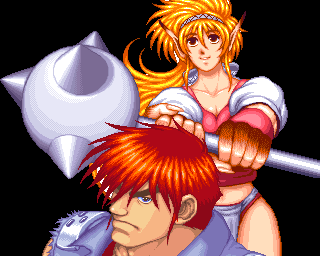 There are six playable characters in total.

Makai is the main character, and also the source of the game’s title. He has a spinning kick that would make Ryu and Ken proud. and a sonic blaster on his wrist. He can also light people on fire by kicking them.

A stylish purple haired policewoman who mostly attacks with her legs.

A huge, white and pink lizard-like beast, Zeldia is extremely strong. She can spit fire, roll up into a ball, and shoot needles from her arms.

Tulks is a wrestler, who looks slightly out of place in the futuristic setting. Channeling equal parts E. Honda and Goro Daimon, Tarakusu can slam into enemies like a torpedo and bang the ground to cause earthquakes.

Iyo is a monkey-like beast girl with elf ears, and is the most agile of the characters. She wields a very large mace, which can extend Son Goku-tyle and even ignite on fire.

A cybernetic being, Belva has jets in his feet, which allow him to glide across the levels. He can electrocute enemies, and has spikes beneath his armor, which can impale enemies like a porcupine. 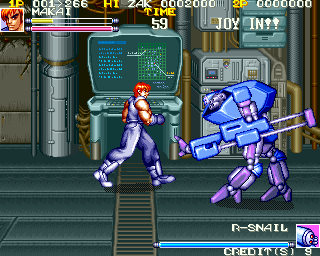 The biggest change to the beat-em-up formula is how it approaches special moves. Typically their usage needs to be rationalized, whether it was the limited-use screen clearing attacks of Golden Axe or the health-draining crowd control attacks of Final Fight. In Denjin Makai, special attacks are linked to a secondary power meter. Each character has roughly a half dozen super moves, some activated by pressing buttons at the same time, others by holding down the attack button and pressing back and forth or up and down. For all of their usefuless, they can be hard to pull off consistently. 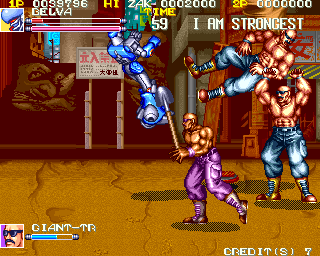 Each of these character specific attacks will drain various levels of this power meter, although you can usually pull off at least three in quick succession. It regenerates rather slowly, although you can speed it up by standing still for a second or so, which will surround your character with a Dragon Ball Z-style flaming charge. Additionally you get a small burst of power every time you take damage. There are also special desperation moves, unleashed when your health is low and your power is at max, and team up attacks when playing in co-op mode. 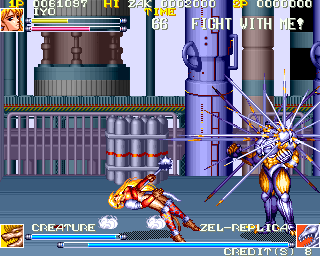 With no repercussions in executing special attacks other than having to find some time to recharge, it drastically alters the flow of the action. The standard attacks and combos are something you to do defend yourself or deal some minor damage while your power regenerates. It’s a much more involved game as a result, one that distinguishes itself quite skillfully amongst a crowded genre. Of course, to balance this, you’re only given a single life, and need to insert more credits once you lose it. To halfway counterbalance this, there’s a scoring system in place, which grants more points the lower your life meter is. When you cross certain thresholds, your maximum life and power will be increased. These upgrades also carry through after you continue, so you needn’t worry about losing them. 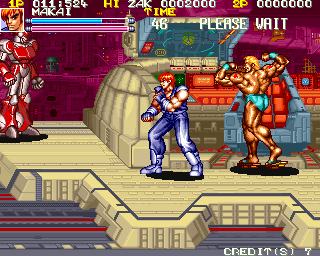 The visuals, outside of some slightly unique character designs, are decent albeit typical. The world of Denjin Makai is a futuristic city with some vague cyberpunk influences, a setting not unfamiliar to the genre. But, the sprites are solid and the backgrounds are well drawn, so it’s hard to complain. There are a couple of amusingly weird moments throughout, like the legion of colored ninjas who appear to be out a sentai group, and an encounter with Neptune, the Roman god of water. However, some of the bosses are simply recycled versions of a few of the player characters, which is a tiny bit lazy. The music is solid, if mostly forgettable. It does rip off some famous 80s music though, with pieces that are suspiciously similar to the theme from Chariots of Fire, as well as Eye of the Tiger. The arcade flyer artwork was drawn by famed manga illustrator Go Nagai. 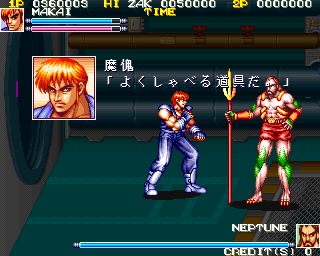 Denjin Makai was ported to the Super Famicom, where it was inexplicably renamed Ghost Chaser Densei (Ghost Chaser Lightning Spirit). The visuals have been cut back substantially – the animation isn’t as smooth, many background details are missing, the colors are incredibly dark, and the status bars at the top of the bottom of the screen are now opaque where they were previously transparent. It plays pretty well, although not as quickly nor as tightly. 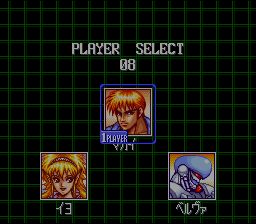 The major blow is that half of the playable roster is missing, reducing your characters to three: only Makai, Iyo and Belva are still present. They have a few new moves, and the fighting system now allows a fair bit of juggling. There’s also a button devoted to special attacks, which makes executing them a little easier. The highway stage has been cut, reducing the total number of levels to five. Since you’re still only given a single life, the health restoratives are now more frequent to eliminate the need for constant continuing. It’s also quite a bit easier, considering there are far less enemies on the screen at a given moment. Denjin Makai also had a fairly large amount of dialogue sequences, while Ghost Chaser Densei reduces the number of these. Overall it’s playable, but definitely a weak port. 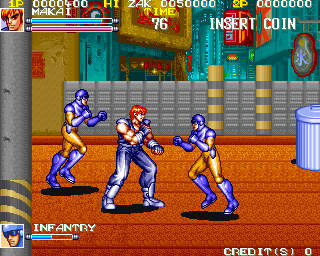 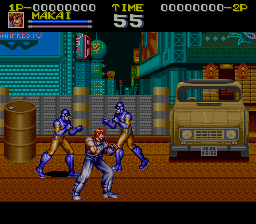