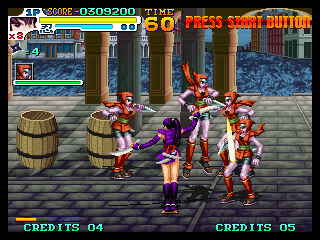 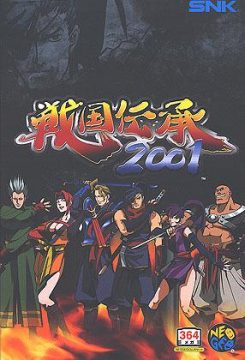 So after two interesting but ultimately sub-standard beat-em-ups, the Sengoku series finally delivers. The third, final, and very unexpected installment of the Sengoku series is superior to the first two games on a logarithmic scale.

Sengoku 3 was developed after the “demise” of SNK in the late 90s. In 2000, SNK filed for bankruptcy, and most of its more prestigious properties, like Samurai Showdown and even The King of Fighters for a short stint, were passed on to various small developers like Eolith and Yuki Enterprises. Sengoku 3 was produced by a small company called Noise Factory (whom also worked on Metal Slug 4, Rage of the Dragons, Matrimelee, and King of Fighters: Maximum Impact), which had previously developed another awesome and eerily similar arcade beat’em up called Gaia Crusaders. Sengoku 3 basically runs off of the same engine, and that’s a very good thing. 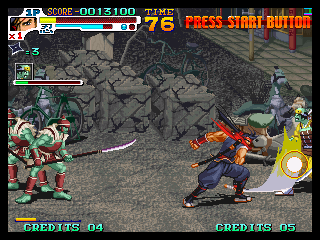 The first thing one notices about Sengoku 3 compared to its unworthy predecessors are its production values. The standard archetypes and conventions of the beat’em up genre are completely discarded in favor of characters and motifs more like something out of Samurai Showdown. The look of the game is also very distinctive. Sengoku 3 is one of the best looking games on Neo Geo. Just try to imagine if Garou: Mark of the Wolves was made into a beat’em up and you’d have an idea of how amazing this game looks. The sprite animation is extremely smooth, the sprites themselves are well designed and appealing (especially Okuni’s… heheh), and some of the effects are really pretty.

Sengoku 3 has really well-designed characters. Each is unique, brings something different to the table, and amazingly, almost all are useful in their own way.

Super cool, rugged ninja and main character of Sengoku 3. Like any main character in a beat’em up, he’s really balanced, leaning very slightly toward slower and stronger than average. His first special is a diagonal downward beam of energy from his sword, a lot like one of Haohmaru’s supers in Capcom vs. SNK 2. His second super is way cooler. He energizes himself with electricity and dashes foward, slicing anything in his path as he streaks across the screen. He can also use the classic ninja staple; the Izuna Drop. His ultimate move is a lightning spell.

The Spanish ninja. And no, not Vega. This guy is dripping with style and is probably the best character in the game, built for ridiculously long combos. His first move is a flame projectile shaped like a phoenix. His second is a dashing move. If he connects with an enemy during the dash, he performs a quick combo ending with a powerful flaming sword uppercut. His ultimate is a fire spell.

A ninja woman, Kurenai is the fastest of the bunch, but also the weakest. She has insane combo potential and is really good at keeping hordes of enemies off of her, which is good because she also lacks defense. Her first special is a spinning tornado slash. Her second special involves her splitting herself into four and dashing in various directions, hitting anything in her vicinity. Her ultimate attack summons a bunch of kaede leaves which somehow cause damage to everything on screen.

Kongoh is big, strong, but extremely slow and his moves are really boring. He fights with a giant iron rod that’s about as thick around as his leg. His first move involves him stunning his enemy and then throwing them. His second is merely him tossing his rod forward. His ultimate attack creates a rain of falling iron rods.

Byakki is one of the bosses that joins you after the third mission. He’s a really awesome character. He summons a demon from the underworld during most of his attacks, a demon that looks a lot like Eddie from Guilty Gear. His first move makes the demon’s claw rise from the ground hitting any enemy near it multiple times. His second summons the demon who then slashes any enemies directly in front of it. In his ultimate attack, he summons the demon who then causes a bunch of meteors strike all the enemies on screen.

Even Mai Shiranui can’t quite compare with Okuni in the bust department. Okuni is a Jovian-breasted sorceress who also joins you after the third mission. She mainly focuses on long range attacks and her combos are fairly lacking. Her first move is a simple projectile wind burst. Her second is an electric attack using her fan. Her ultimate attack is a tornado of flower petals. 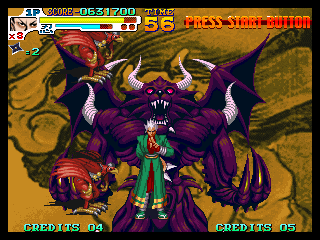 Where Sengoku 3 truly triumphs over the previous Sengoku games, and most other beat-em-ups period, is its highly complex and incredibly enjoyable combat system. Rather than being limited to one attack button string, a jump, and a life-draining special by combining the two like most beat’em ups, Sengoku‘s button setup is more akin to a fighting game, with a light attack, heavy attack, and long-ranged attack button. Rather than simply mashing the attack buttons to render combos (which you can still do in Sengoku 3 to your heart’s content), each character has an arsenal of special moves using directional inputs similar to traditional fighting game motions. Also, each character has a super bar and several super moves that use varying levels of energy from this bar. While most other beat’em ups by this time had also adopted these conventions, none of them execute them with quite as much flair and effectiveness as Sengoku 3.

Sengoku 3‘s greatest asset is the number of options you have when attacking. There are many different ways to start off a combo. The most obvious is to simply walk up to an enemy and start mashing the light attack button, which usually involves mere punches and kicks. But at any time during a light attack combo, you can interrupt with a heavy attack, a slower, more powerful attack that usually brings a weapon into the picture, and depending on how many light attacks you’ve done, the heavy attack will be different. In the same chain, you can even go back to light attacks after a heavy attack. You can usually use two or three heavy attacks in succession, the last one typically ending the combo. But if you’re good, you can juggle the enemy as they fly away from you using various techniques like dashing by double-tapping the forward button. Dashing into an enemy damages them slightly, knocks them away, and sets up a juggle opportunity, even if the enemy you dash into is already airborne. By using these methods in cooperation with very correct timing, you can keep combos going for 20-30 hits, and because Sengoku uses a damage reduction modifier for juggles, it doesn’t break the game or make it obscenely easy like you’d expect. It’s just lots of fun and involves a lot more skill than the average beat-em-up. 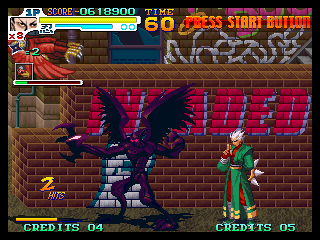 Sengoku 3 discards most of the elements from the previous games, such as acquiring different weapons (each character has their own weapon here), transformations, and random warps to other planes of existence. It’s to the point where it’s curious as to why it even has the Sengoku name, beyond name recognition for the handful of arcade gamers that would’ve cared. Some aspects are missed, like the random warps to other planes of existence, but the rest, not so much. One particular difference is the introduction of throwing weapons, a beat-em-up staple. But rather than just picking up things enemies drop and chucking them once, Sengoku 3 allows you to stash a great number of various different types of ranged weapons (but only one type at a time) including shuriken, bombs and kunai. Aside from plugging enemies at range, these weapons can also be integrated into your combos quite effectively.

Sengoku 3 has a great gameplay structure. It plays out almost identically to Gaia Crusaders, where you’ll be able to select which stage you want to go to. The stages consist of various countries all over the world. Some of them are pretty well designed and involve a little bit of interactivity rather than just being static. Some of them go for this photo realistic look, however, and these stages are somewhat uglier. Also, like Gaia Crusaders, you’ll fight certain character bosses at the end of stages and later those characters will be selectable. The stages of Sengoku 3 also have fairly catchy music, and while not quite memorable, it gets the job done. Most of it is pretty high quality techno/rock with a bit of traditional Japanese woodwind thrown in for flavor, composed by Toshikazu Tanaka of Metal Slug 4/5/3D, Rage of the Dragons, and Matrimelee fame.

Combine all of these elements and you have one quality beat-em-up. Sengoku 3 is just pure beat-em-up bliss, nothing short of spectacular in almost every area, and an extremely surprising evolution to a series that was never really impressive.