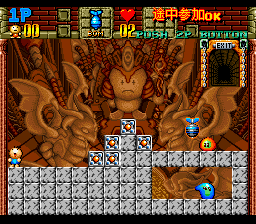 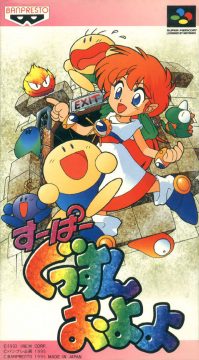 Many arcade games are graced with a console port. Gussun Oyoyo has the strange honor of being ported TWICE by two different companies at the same time. The first port was Xing’s bland offering. This one was done by Banpresto.

Super Gussun Oyoyo is everything you would expect of an SNES arcade port. It looks authentic, but the music and voices are a bit tinny because of the available sound chip. Also, Yousame is now named George.

But there are some problems that make this game a nightmare. The arcade version has unlimited continues, but this one doesn’t. Since it’s so hard to get extra lives, you will scream into your television at some point. All the enemy respawns and other arcade issues have sadly made it here intact. But if Arino can finish the game, that means there is hope for all of us! Of course “finish” is a relative term, because Banpresto added a lot of bonus levels and extra endings to the original content.

A versus mode is added if you want to crush your friend instead. You’re both thrown into an arena, tasked with surviving the longest. Drop those pieces to stay out of the water and away from the top. Whomever drowns last is the victor! It’s actually pretty fun and feels like a strange twist on Tetris.

For the inner game designer in you, there is an editor which allows you to create your own Gussun Hell. You will then share it with your friend. He or she will likely tear all hair in frustration as they are tortured by products of your evil mind. Once bald as Gussun himself, your friend will pick up the controller and create revenge levels for your displeasure. 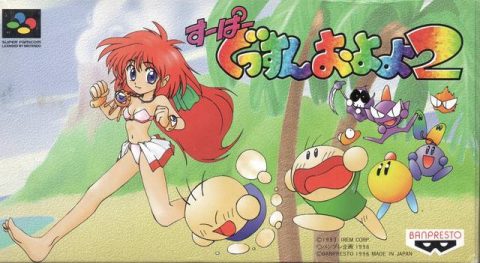 It’s a bit strange. The Super Nintendo was definitely on the way out and the PlayStation was hot stuff in 1996. Xing themselves brought Gussun Oyoyo to newer hardware, giving us better sound quality and better visuals. For some reason, Banpresto continues the adventures of our little buddies on an older system. Was it a licensing issue?

Whatever the reason, Banpresto still ups the ante considerably. This time around, Gussun and Oyoyo are hanging out on an island for vacation. But then a volcano erupts and the island starts to sink! Oh no! George and Emily hope that you survive! Also, birds!?

Everything is new and improved. George fans will be delighted that he is even more naked and muscular. The levels are completely original and sometimes have a much nastier bite. Don’t expect too much – the controls and power-ups are identical to the first one. This time around, the game takes it easy and gives you unlimited continues. It will even save the game when you quit. Thank goodness! 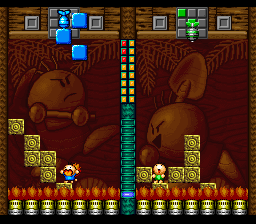 The first thing your friend will notice is that Versus Mode is kinda different. Instead of worrying about water, you have to dodge flames. You can also drop unbreakable blocks on your opponent and send bombs to foil their plans of survival.

When your friend goes to the bathroom, this is your chance to play the new solo Puzzle Mode. You have limited pieces at your disposal and you must use them to reach the exit. This version of the game is more about brainpower than frantic luck and reflexes. There aren’t any enemies, so you might expect an easier time. However, these puzzles get very tricky soon into the third Area.

Overall, it’s clear that this game is more awesome in every way. It’s so polished that it gleams with a shine that will blind you to the original. However, we’re not done yet. Banpresto is about to top this glorious sequel.