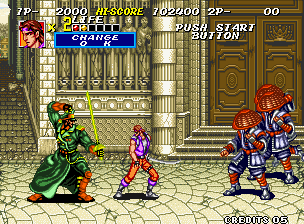 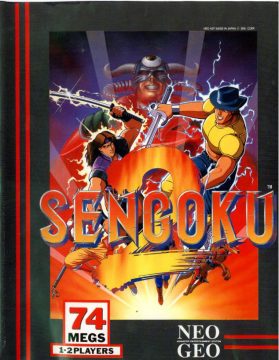 Sengoku 2 is your pretty standard sequel. It improves each area of the first game, but sadly doesn’t really rectify any of the first game’s mistakes either. Once again, you take control of generic beat-em-up bad dude, only this time with a pony tail, and you take on another legion of undead warriors. This time around, your character starts with a sword. The orbs are still there, however, but now they merely function as upgrades for your sword. The levels also send you through various time periods in different parts all over the world to fight Japanese demons.

Many of the same quirky elements, such as transforming and warping to other planes of existence every few steps, are still perfectly intact. Now you have a few more options when transforming, and these are all given to you at the start of the game, whereas in the first Sengoku, you had to acquire them.

Apparently replacing the samurai from the first game. Tengu fights with a rod and has a pretty substantial reach, making him the best transformation by far.

The dog/wolf thing is back, and just as good at getting its ass ground into fine powder by the enemies of this game as ever.

A ridiculous looking ninja who throws projectiles. Quite possibly the worst ninja in the history of ninjas, and that’s including the ninjas from the American Ninja movies. 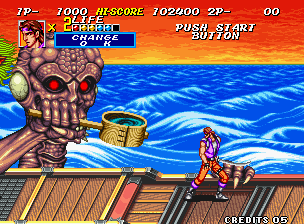 Some tweaks were made to the gameplay. First of all, a low attack button has been added. Who knows why, because Sengoku 2 doesn’t have a low/high defense/offense system like fighting games do, and the low attack functions identically to the standing attack. Second, by holding both attack buttons, you can block, though this only works against “standard” attacks and it can be sometimes difficult to define what “standard” attacks are in this game.

The game’s presentation and structure overall is an improvement over the first game. While the design is still quite bland, the sprites at least look quite a bit better, especially the enemy sprites. The opening segment is, at least, pretty badass, where you jump off the roof of a building and are greeted by a screaming dragon, who destroys the ground you’re standing on and sends you in the battlefield of the first level. The bosses are bigger and more unique, and the overall animation is a bit better. The music is a lot more streamlined, with most of the creepy chanting from the first game gone, despite its nice effect. But despite these improvements, Sengoku 2 does nothing for the first game’s lack of combos, cumbersome fighting engine, stiff controls, and repetitive gameplay. Worth trying for the craziness, at least.