The best part of the original Lufia lied in its opening moments, with the defeat of the Sinistrals. Lufia II is a prequel, elaborating on Maxim and Selena’s relationship, their journey to gather their band of warriors, and their tragic downfall. The game begins focusing on Maxim, a monster hunter from the town of Elcid. The monster populace has been rising, which is great for his job, but prefaces the return of the evil gods that torment humanity. 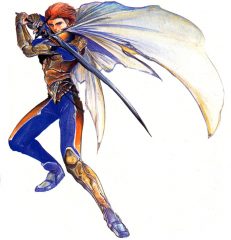 The main character, the father of the hero in Lufia & The Fortress of Doom, and one of the Four Heroes. He can use healing magic and some offensive magic, but is primarily a front line fighter.

A mysterious woman who provides the heroes advice and other council in their battle with the Sinistrals. 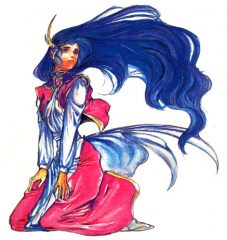 A shopkeeper in Elcid, who has a crush on Maxim, and is the first character to join the party. Obviously, her romance is doomed. She’s also a spell-caster and wields a whip.

Guy is a fellow monster hunter, and one of the Four Heroes, who joins the party in the town of Tanbel. He doesn’t have any magic abilities, but he is a powerful front line fighter. 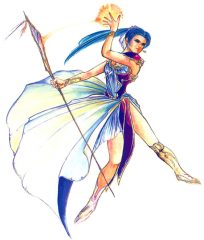 The third of the Four Heroes, the eventual spouse of Maxim, and the mother of the hero from the first game. She is the Commander of the army of Parcelyte. In combat she can work as both a powerful spell caster and as a front line fighter. 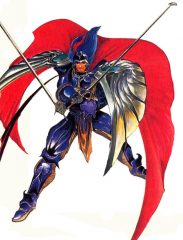 One of the champions of the Bound Kingdom. He considers himself to be one of the greatest warriors in the land, and his skills back it up. 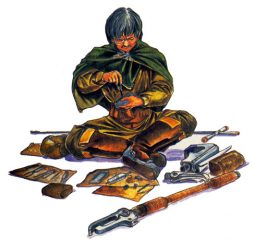 An inventor and spell-caster from Trendool who joins the party before leaving to do Science! and build the party a submarine. As he’s an inventor, logically his weapons are wrenches. 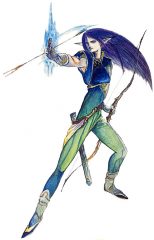 The fourth of the Four Heroes, Artea is an Elven warrior wields bows and is a spellcaster, making him perfect for the back row. He can be found in (unsurprisingly) the Elf Village. 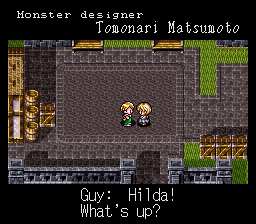 Lufia II profits from some significant gameplay improvements over the first game, all of which elevate it from the generic RPG status held by its predecessor. For starters, there are no random battles in the dungeons. In these areas, all enemies are visible on the map, and they only move when you do, so you can avoid battle through careful movement. There are still random battles on the overworld screens, but these areas are brief. 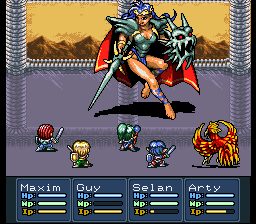 The dungeons are now full of puzzles, similar to The Legend of Zelda: A Link to the Past. Most of them involve moving blocks, hitting switches, tricking enemies into hitting switches, and so forth. Most of them aren’t too difficult, but there are a small number that can be really difficult. For example, the above puzzle requires that you match up three blocks of the same color, after which the disappear. The goal is to clear all of them, but one wrong move and you’ll have to start over. There are a variety of tools to use, including arrows, bombs, and hookshots, which again, should be familiar to Zelda fans. Thankfully these items are in unlimited supply, and if you screw up a puzzle, you can always cast the “restart” spell to return the room to its default state, with no penalty attached. 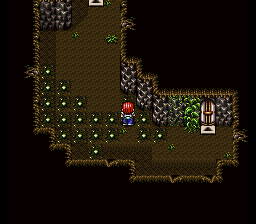 The “no random battle” rule makes dungeon crawling far more rewarding. Typically finding all of the items in a dungeon is just a matter of tenacity, a question of whether the player has the patience to deal with random battles every few steps or whether they’d prefer to make a beeline towards the exit. Here, there are often optional puzzles to solve, so the rewards you obtain instead come from your own hard work. In general, the dungeons are also larger than before, but also feature save points, and health and magic recharge points, making trips through them more manageable. 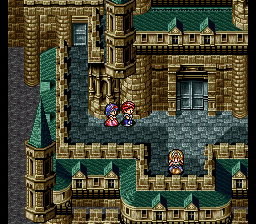 The battle system is similar, though there’s now a separate battle screen with a unique background, rather than just taking place on a transparent backdrop in the first game. The characters also stand separately from their status bar, so it no longer has that weird disconnected feeling. 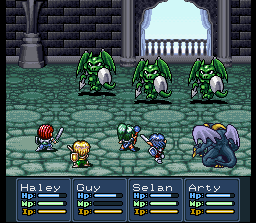 The biggest change involves how the equipment system works from earlier games. The game uses what is called the IP system, which is essentially a power gauge for each character. This builds up as the character attacks and is attacked. When the IP gauge reaches a high enough level, then he can use the IP skills for his various weapons. Different weapons have different IP skills, and some weapons don’t have IP skills at all. Thus, the player has to decide what gear to equip based on what skills are available, in addition to any stat boosts the weapons provide. The game also lets you equip two kinds of accessory items – gems, which are dropped by certain enemies, and accessories, which are found in chests and can be purchased in stores. 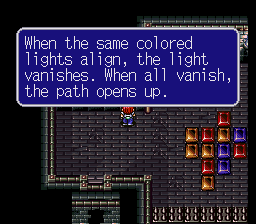 Lufia II also provides the player a selection of capsule monsters which you can collect over the course of the game, who will fight alongside as a fifth party member. They are AI controlled characters and can be targeted by enemies. They cannot be healed by party members, but if they are killed in combat, they are fully healed after the fight has ended. The monsters will gain levels along with party members, and they’ll evolve and learn new abilities by being fed specific items. 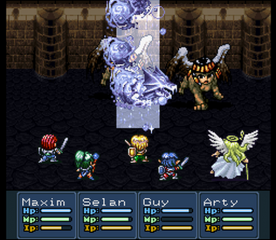 The game also has one of the most elaborate side quests of any 16-bit RPG: the Ancient Cave. This is a 99 level dungeon that’s almost set up like a Rogue-like. Your characters begin at level one, with only a limited assorted of items. The levels herein are randomly generated, the layouts, enemies and item disbursements that change every time you start the dungeon. While your party still gains levels and can find new equipment, they lose most of it if they leave or are defeated, and return back to the state when they originally entered it. There are, however, exceptions. Items found in blue treasure chests can be kept and used in the main quest. The same goes for items found in Iris chests, which are special equipment only found in the Ancient Cave. You can exit the dungeon and keep your items if you use the Providence item, which is found semi-randomly throughout the floors. The bummer is that there’s no way to save, and dying will kick you right back to the entrance, so actually making it all the way through is quite an achievement. The depth is incredible for something that’s entirely optional, and basically stands at its own game-within-a-game. 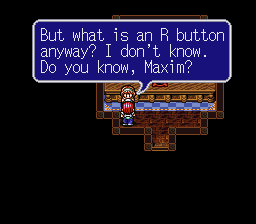 On the narrative side of things, the party will go through many more members than the first game. Like Final Fantasy IV, the characters bounce in and out of the party at their will, so you need to routinely change your strategy based on their abilities. In general, the party’s lineup at any one time will consist of two fighters and two casters. A few characters will even perish over the course of the adventure. 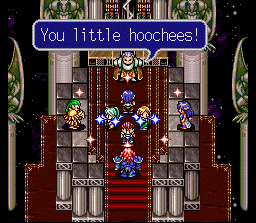 The story is pretty decent, if somewhat rambling and unfocused, as an excuse to pad in some extra dungeons. The English writing isn’t quite to the level of Ted Woolsey’s work on Final Fantasy VI or Chrono Trigger, or Working Designs’ work on the Lunar games, but it’s still decent, giving each character a fun, unique personality. There are a few typos and bits of untranslated text, but the most amusing part is when Daos, the leader of the Sinistrals, refer to Maxim and his troupe as a bunch of “hoochees”, which is not only a misspelling of “hoochies”, but suggests that the translator didn’t actually know the meaning of the word. It would be a “spoony bard” type moment if Lufia II was more popular. 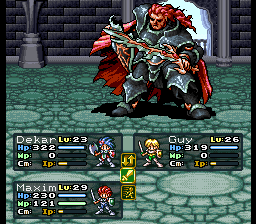 Still, it’s a pretty dark game, because there’s a palpable sense of dread surrounding the whole experience. Anyone who had played just the intro of the original Lufia knows that Maxim and Selan are doomed, and there’s nothing that can change that. Overall, though, the experience is relatively light hearted, with amusing banter and fun characters, like the rivalry between Dekar and Guy, or goofy, incredibly incompetent thief duo of Bart and Berty. It’s also cool to see how Maxim and Selan first meet, how their relationship grows, and when they have a kid. Most of this development is done over a time-skip interspersed with cutscenes, but there are very few RPGs that feature main characters that married and have children. The only similar games are Phantasy Star III and Dragon Quest V, since choosing a spouse and having children is central to the concept of both games. Lufia II isn’t as elaborate – there’s no choice involved so Maxim will always marry Selan – but it’s a little more heartwarming considering their personalities are more fleshed out than other similar games. 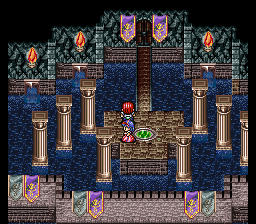 Visually, the game is a slightly improvement over its predecessor, although it still can’t quite escape from looking like nearly every other JRPG from the era. The Sinistrals, again represented in battle as towering characters that take up half the screen, still look goofy compared to the super deformed sprites of your party members. The soundtrack, however, is absolutely fantastic, with some truly rocking battle themes that show off some of the best guitar work on the SNES. The music was composed by Yasunori Shiono, whose only other works include Energy Breaker, a Super Famicom SRPG made by some of the staff as the Lufia games, as well as a handful of obscure computer titles. Given more exposure, his work could easily stand up to Square’s soundtracks for the system. 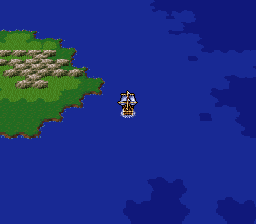 At any rate, Lufia II is a massive improvement of its predecessor – the visuals are decent, the music is outstanding, the approach to battling and dungeon crawling is remarkably progressive, and even the story is fairly decent. Though it doesn’t have the pedigree of a Square-developed title, it still ranks as one of the better RPGs on the SNES. 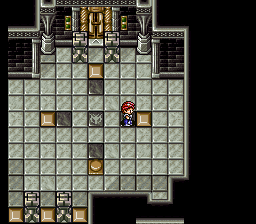 A few things have changed from the Japanese release to the English release. The crosses have been removed from the churches, the bunny girls in the casino are now just regular looking women, and then are some color palette changes in a few areas for no evident reason. However, three puzzles have changed, including one that was totally redesigned in the Gordovan Tower, presumably because it involved moving a series of blocks in the shape of a cross. 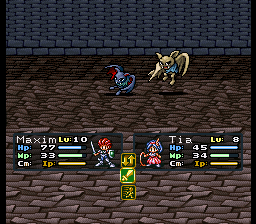 Lufia II was ported to mobile phones even before its predecessor, in 2004. There where two versions, one called Estpolis Light for older cellphone models. The other is Estpolis DX, which almost matches the SNES version in graphical fidelity. These are not full ports, but instead concentrate only on the Ancient Cave portion of the game.

In 2013, a prototype ROM of Lufia II was made public. While it’s in an unfinished state with a number of bugs, it includes a number of differences, including changes to map layouts, different sprites, and some unused and slightly different music.