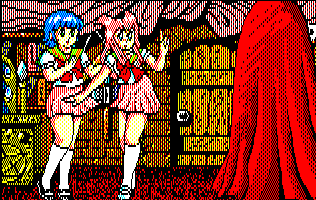 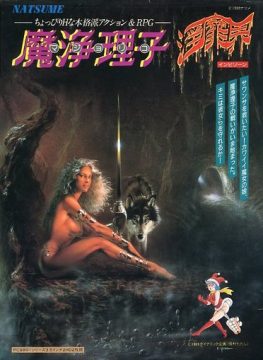 Majoriko is just an ordinary schoolgirl, but her friend Sawansa happens to be the daughter of a powerful witch. When mucking around with their mom’s stuff, they accidentally awaken a warlock inside of a mirror, who whisks Sawansa to another dimension, leaving Majoriko to jump in and rescue her. 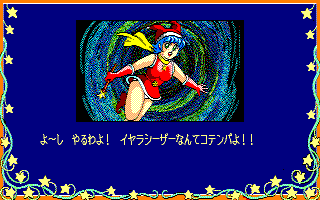 Majoriko Inbizone (also known as Majoriko Inbikai, or “Majoriko in the Impure Zone”) is a side-scrolling action game with some mild RPG elements. Each of the game’s eight stages is open ended, as you hunt for keys to unlock the boss door, while defeating enemies to gain magic and gold. There are plenty of shops to help you out, though, where you can buy new magic, get items, take a shower, or even get a massage. All of the shopkeepers are scantily clad women, with the item store owner having a thing for S&M. Indeed, there is a bit of naughty streak – typical magical girl transformations cover up any nudity with camera cuts and flashing colors, but the game has no qualms about showing Majoriko in the buff when she dons her unique outfit, which looks something like a cutesy jester. Every hit by an enemy will strip a bit of clothing, which is actually important to note, because there’s no actual life meter otherwise.

The game was developed by Natsume, in conjunction with Dynamic Planning, the studio owned by famed manga artist Go Nagai, known for his stylistic blend of horror and erotica. Majoriko Inbizone is actually fairly subdued though – it’s rather softcore, and while the first level has some grotesque imagery, the terror is undercut by the appearance of some goofy enemies, which include butterflies and dogs. The same joint team later worked on the NES shoot-em-up Abadox, which takes place inside of a gigantic monster and commits more strongly to the gross-out factor. While the protagonist of Abadox was an anoymous character in a space suit, the story does involve rescuing a woman deep within the monster’s belly, who is fully naked in the Japanese version of the game – this is perhaps a holdover from the premise of Majoriko Inbizone, or just Go Nagai in general. 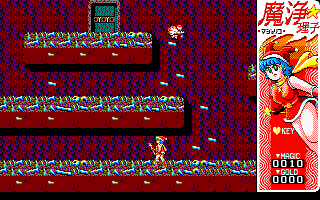 Interestingly, despite using Japanese anime-style cutscenes, the cover artwork actually looks like Western fantasy artwork, featuring a woman that looks nothing like Majoriko (though she still appears smaller in the corner).

Return of the Ninja
Night mode