The title of this game is confusing – it’s simply called The Ninja Warriors in Western territories, which seems to suggest that it’s a port. But it’s known as The Ninja Warriors Again in Japan, suggesting that it’s something of a remake or a sequel. This SNES installments takes many of the aspects of the original and completely overhauls them, resulting in a much, much, much better game. 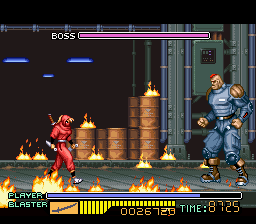 The plot is essentially the same – ninjas beat up bad guys to take down an oppressive regime – although this time there are three robots, each with different capabilities. The Kunoichi is the most balanced character, wielding kunais and possessing both average speed and strength. The Ninja is a huge, hulking beast, with powerful brute force attacks dealt out with his fists and nunchakus, as well as a speed dash in place of his jumps. The Kamaitachi, brand new to this installment, doesn’t even try to hide its robotic appearances, and attacks with extendable blades on its arms.

The basic gameplay is pretty much the same, although the shuriken attacks have been completely removed. Movement is restricted to a single place, and while there’s more variation in the stages than its predecessor, most levels are pretty much just a straight line to the end. But the fighting has been drastically improved. There are now finishing moves executed after landing a few strikes, similar to Final Fight. You can grab enemies and either slam them into the ground or ram them into other enemies, which is extremely important for crowd control purposes. 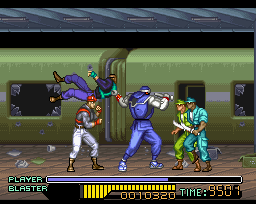 There are occasionally items, like huge safes and motorcycles, which can be picked up and lobbed at other bad guys. Both of these moves are quite useful, because you’re invincible while throwing anything. Like the original, you can still block, which is required for beating many of the boss encounters. Finally, there’s an extra power meter that slowly builds up over time – when it hits maximum, it can unleash an explosion which damages everything on the screen. However, being knocked to the ground drains it completely, so you can’t depend on it too much.

With all of these improvements, this installment of The Ninja Warriors is far better than its predecessor. Given that it was designed specifically for the home consoles, it’s also quite a bit easier. Although you need to restart the area when you get killed, you have unlimited continues, and can even change between characters if you want. It’s also quite a bit easier than the arcade version. Unfortunately, some of the cooler aspects have been lost – there’s no longer any battle damage as you take hits (although you still explode when you’re killed), and the game’s only single player, which is a huge detriment for beat-em-up games. The music is pretty forgettable, and let’s face it – the gigantic sprites were impressive back in 1987, but several years later on the SNES, where launch titles like Super Castlevania IV featured similarly styled characters, the graphics just aren’t as overwhelming. Still, it’s a fun beat-em-up – not to the levels of Final Fight 3, but better than the earlier Final Fights or any of the Rushing Beat trilogy (Rival Turf, The Peacekeepers, etc.) 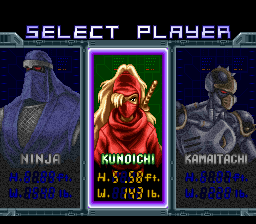 Much like Final Fight, the original Super Famicom version had female enemies, which were replaced by claw-wielding freaks in the Western releases. There’s also a small green splatter whenever you hit bad guys in the Japanese version, which is missing in all of the other versions. 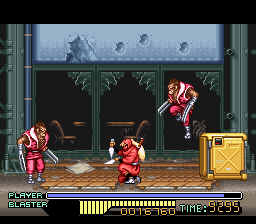 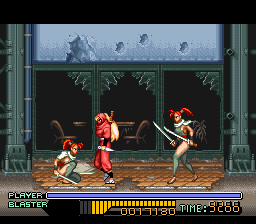