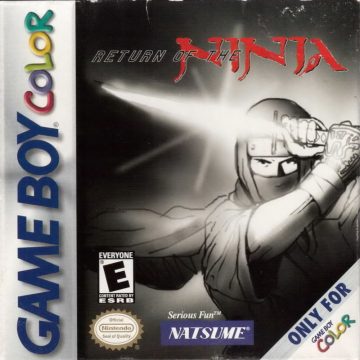 Shadow of the Ninja was a decent NES action game from Natsume released in 1991, which set itself apart from the more popular Ninja Gaiden games by offering co-op play. A whole decade later, released Return of the Ninja, which implies that it’s the sequel to the earlier title. However, the connection is extremely vague, and it’s hard to really call it a sequel, or even much of a spiritual successor; indeed, it doesn’t even share any of the same staff, as it was outsourced to another company called Act Japan. The game was not released in Japan, only North America and Europe, so there’s no “original” Japanese title to make the connection.

The only real aspect that Return of the Ninja inherits from the NES game is that there are two ninjas to play as – male ninja Tsukikage and female ninja Sayuri – as they strike back against an opposing clan to take back a stolen scroll. While as a Game Boy Color title, it’s obviously missing the two-player simultaneous play, the two characters actually play somewhat differently – both have different sword swipes, and while Tsuikikage fires shurikens as his special charge attack, Sayuri has boomerangs. However, the two games play nothing alike. Shadow of the Ninja offered a few different weapons, like sickles and throwing bombs, while other than their innate abilities, the only weapon power-ups you find are magic spells, which attack all enemies on the screen, similar to the Shinobi games. You also have a cool backflip ability, activated by ducking and jumping.

Instead, there’s a focus on finding assorted ninja gear. In a 1990 Nintendo Power strategy guide for Ninja Gaiden II, there was a fold-out spread that showed off various neato ninja tools and other trivia. It was completely irrelevant to the game, but it sure was cool. In contrast, Return of the Ninja seeks to integrate items like these into the game. Throughout the levels, you can find claws that let you dig in certain types of sand; a “tabi”, which lets you walk on ceilings; sandals, which let you jump super high; a kabuto helmet, which lets you break bricks with your head; and a mantle, which lets you float in the air. Additionally, there are collectible cards, which are obtained by obtaining certain ranks when beating a stage, detailing even more ninja tools. These aren’t actually used in the game though, and are just sort of optional achievements, though there is a function where you can trade these with other players using a link cable.

Many of the levels are open-ended, though they’re not quite large or confusing enough to need a map. However, the limited resolution of the Game Boy Color tends to make navigation a problem, especially as projectile-shooting enemies and essential platforms lie out of view. Your ninja can only take four hits before getting killed – technically, they retreat in a cloud of smoke as they cower in failure on the game over screen – and the lack of checkpoints means you need to restart the stage from scratch, even at a boss fight. Once you beat the first level, you can play the next four in any order, before opening the sixth and final stage, and progress is saved via a password.

While the ninja tools and the exploratory nature might seem to make a good combo, in practice it’s very undercooked. Imagine how fun it would be to fool around with cool ninja things like caltrops and smoke bombs and sickles! But these are the sort of items that are just relegated to the cards – instead, the items you do find have a very “lock and key” approach (when you see sand, you need to hunt for the claws) so they’re not that exciting to use. And since the levels aren’t really satisfying to explore, it’s a hassle to find them, especially if you’re replaying a level upon dying.

There’s also a quasi-stealth element, where enemies become more aggressive if they spot you. However, this isn’t exactly a 2D Tenchu – the enemies are generally just plopped arbitrarily throughout the game, spotting you right as you enter the screen, so you’re not even given the opportunity to sneak up on them. (However, you can also dispose of them so quickly and easily that it doesn’t even really matter.) It seems like an element that was hastily tacked on near the end of development, but the level design wasn’t changed to take it into account. How often you’re support, along with your clear time, determines your rank when you beat a level.

Visually, Return of the Ninja is rather average looking, a far cry from the technically ambitious effects from Shadow of the Ninja. That game opened up with a level with some cool rain effects, but there’s nothing like that here. The best that can be said about it is that there’s plenty of background variety, that makes it easier to navigate the open-ended stages. Natsume NES games were also known for their excellent soundtracks, but this game doesn’t fare nearly as well either, with much of it being  generic, with a sparse number of tunes recycled through various parts of the stages.

While Return of the Ninja stands out from the licensed junk that typified the Game Boy Color library, it’s still not very good; not nearly to the level of any of Natsume’s NES games, and a pale shadow compared to other ninja games like Shinobi, Ninja Five-O, or even Ninja Gaiden Shadow for the original Game Boy, which was far more closely connected to Shadow of the Ninja than this game is. Its rarity has made it a collectors item on the second hand marketplace, though it saw a second print run in 2020 courtesy of Limited Run Games.