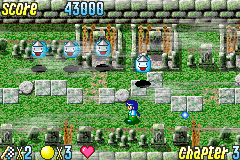 For the franchise’s foray onto the then-new Game Boy Advance, Taito once again loaned the franchise out to another developer, the recipient this time being Altron, a company mostly known for licensed titles. Instead of following in the footsteps of the SNES games, Altron decided to create an entry that feels like a sequel specifically to the arcade game. This could be considered a flawed idea, seeing as how the SNES games are the most beloved entries, but if you have fond memories of the arcade game and aren’t looking for a co-op experience, this installment isn’t a bad way to spend an afternoon by any means. 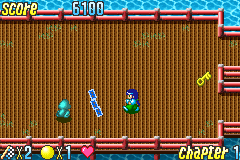 The story this time revolves around the return of a ghostly hydra that has broken out of its seal to wreak havoc. Apparently Pocky was the one who sealed it away previously, so it’s up to her and her two compatriots to defeat the hydra and seal it away once again. As the English name of the game implies, Pocky and Rocky are joined by Miki from Dotou-hen, who has now been renamed to Becky. Each character has the same attributes but gets access to a unique power-up if they pick up a purple ofuda. Pocky gets explosive projectiles, Becky gets a spread-shot, and Rocky gets homing projectiles. Your character choice also affects the beginning cutscene and each character gets unique lines.

The action here is identical to the arcade game in almost every way, with the only differences being a few new power-ups and the ability to reflect projectiles carried over from the SNES games. What wasn’t carried over is the arcade game’s difficulty – Pocky& Rocky with Becky is the easiest entry in the series by far and can be finished in as little as 30 minutes. While you still die in a single hit (two in the English versions), there are consistently fewer projectiles and enemies to deal with, so avoiding harm is easier than ever. The boss fights are a pushover as well since bosses tend to only have a couple of attacks at most and can be melted quickly with the fireball power-up. 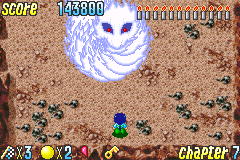 Pocky& Rocky with Becky was heavily criticized on release for its short length and low difficulty, but the game does offer a harder mode through a cheat code unlocked upon beating the game. More than just tweaked numbers, “Expert mode” serves as a technical sequel to the normal mode and provides new dialogue, new enemy types, and more challenging bosses with swapped color palettes. It doesn’t make the game as good as its predecessors, but it does provide enough incentive for a replay and just enough challenge to make for a more engaging experience.