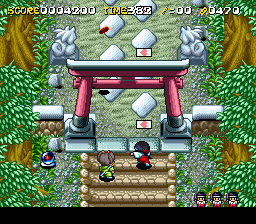 At a glance, Pocky & Rocky 2 is exactly what you’d expect from a sequel – it has more stages, more characters, more mechanics, and an entirely new story while retaining the same core gameplay that has made the series a success up to this point. But once you get your hands on it, you’ll quickly realize it’s quite a different experience. As a single player game, it’s the strongest entry yet, providing Pocky with more tools than ever before alongside a gorgeous soundtrack heavy with authentic Japanese instrumentation and a visual feast for the eyes befitting of a 1994 SNES game. As a co-op experience, it’s a lesser choice compared to its predecessor in every way thanks to design choices that (literally) throw player two aside in exchange for enriching player one’s experience. Depending on how you play the game, Rocky may barely even show up at all!

It’s time for the harvest festival and Princess Luna has descended from the moon with her rabbit friends in tow to join the party. However, the festivities are cut short by a group led by Impy, a mysterious figure who has been sent to kidnap Princess Luna. Impy’s master seeks to take Princess Luna’s hand in marriage, so it’s up to Pocky and the team to put a stop to their plans. Pocky& Rocky 2 more overtly steeps itself in Japanese folklore and traditions compared to its predecessor. The harvest festival depicted here is directly based on the Japanese tradition of Tsukimiin which people hold parties to celebrate the harvest moon. Rabbits being from the moon are a well-known instance of Japanese folklore that ties into Tsukimi and serves as a major component of its existence. Impy is based on the Oni youkai (and is even called “Oni” in the Japanese version) and there are several instances of newly introduced youkai, such as the Yuki-onna (or “Snow Woman”) and direct references to Japanese folklore, including an appearance from the hero Momotaro (localized as “Captain Peach”) and his animal friends. 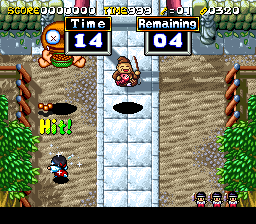 The localization for this game is unfortunately spottier compared to the previous one, containing awkward dialogue and several instances of Japanese text and folklore references being overtly removed or renamed. Some examples of this include Pocky’s ofuda being altered to look like playing cards, Japanese text being removed from doors and signs, and this game’s Raijin equivalent being renamed to “Volta”.

Though there are nine stages this time, a notable increase from the previous game’s six, one of them is entirely dedicated to a training stage that can be skipped if desired. Two of the stages are dedicated to shoot-em-up sections in which you ride upon Mad Dog and Gordon the dragon. These levels don’t allow for co-op at all and Gordon’s stage is particularly obnoxious due to movement controls that have you awkwardly moving Gordon left and right while also moving Pocky up and down, but they do provide variety nonetheless. The introduction of a tutorial stage seems bizarre for a game that’s historically been about moving and shooting, but it makes sense due to the game’s new take on co-op. Whether you’re playing alone or not, Pocky will always be accompanied by a second character that you can select before a stage begins. These characters provide supporting fire for Pocky and they’re also technically invincible, only disappearing briefly before returning if they’re hit too many times. Having a second player controlling them is helpful, seeing as how the AI always follows right behind Pocky and often gets hit as a result, but the other partner options are actively detrimental to the enjoyment of player two. 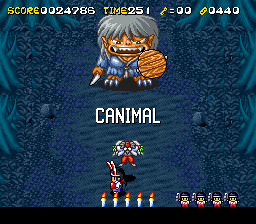 Bombs from the previous game have been replaced by the “partner bomber” attack, which has Pocky throwing her partner into the enemy to trigger a super powerful attack. These attacks are unique to each character and are the only way to deal significant damage to bosses, so you’ll be throwing your partner at them constantly. The catch is that your partner disappears for several seconds after every toss, meaning that player two will have to do a lot of watching from the sidelines if you don’t want boss fights to take forever. In addition to these attacks, player one can also activate magic and fuse with their chosen partner. Doing so gives player one control over the partner character while still having access to Pocky’s projectiles, but what makes magic worth using is that you get access to unique exploratory abilities depending on your partner. For example, using magic with newcomer Bomber Bob gives you the ability to pick up boulders, whereas fusing with Little Ninja lets you open locked treasure chests without a key. 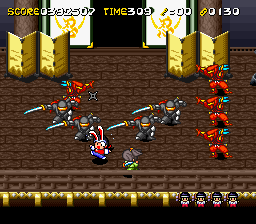 Aside from situations such as these, magic doesn’t have any real use in combat and using it for too long damages Pocky, so it’s not something you pull out too often. Regardless, it’s another ability that leaves player two with nothing to do, so it’s possible to have situations where player one may skip using magic so as to not bore player two. These mechanics are unique and add a lot to the single player experience, giving players a reason to experiment with the partners and explore each stage multiple times, but the experience feels a bit too much like the equivalent of giving a younger sibling a controller that isn’t actually plugged in when you try to play it with someone else.

Stages in Pocky& Rocky 2 are generally shorter and simpler compared to those in the previous game thanks to easier foes and a lack of environmental gimmicks, but they offer new kinds of complexity that make for equally interesting spaces. Branching paths are back from the PC Engine version of the first game and shops have been brought back from Dotou-hen as well. You can buy power-ups to enhance Pocky’s power (this has been simplified, only offering two upgrades and no fireball option), armor and rabbit ears that let you take additional hits, and even hints on how to tackle upcoming bosses. Considering that Pocky’s health is now depicted through clothing damage -without armor, one hit tears your outfit and a second hit kills you- you’ll want to remain geared up whenever possible. You can also find NPCs who offer additional backstory, monetary donations, and additional partners who join your cause. Since exploration is always beneficial, you’re naturally encouraged to take things slowly and investigate areas, which synergizes splendidly with the franchise’s particular brand of start-and-stop pacing. 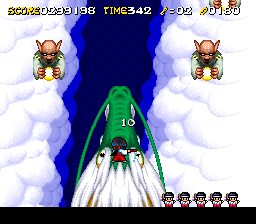 Even with its downgraded co-op and frustrating dragon riding level, Pocky& Rocky 2 is still one of the best run and guns of the 16-bit era. The action is as excellent as ever, the visuals and music are top notch, and the lower difficulty makes it more approachable compared to its predecessor. Its original ideas are unlike anything else in the genre and it’s a shame that they weren’t tweaked and reused for future entries. It may be different than expected- and polarizing as a result- especially considering Natsume could have left the formula exactly as it was, but this game is absolutely worthy of standing alongside its predecessor thanks to its creativity and charm.