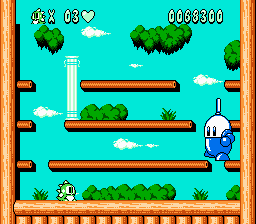 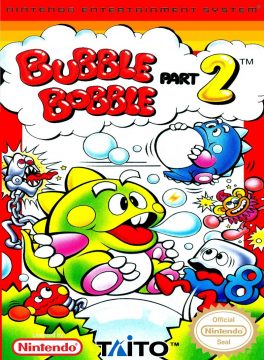 One of the most experimental entries in the Bubble Bobble series begins with a relatively standard story; Bub and Bob (or their descendants Chubby and Rubby in the Japanese version and back of the NES release box) must save Judy from the clutches of three powerful Skel Monsta wizards known as the Skull Brothers. Players must complete 80 levels spanning four themed worlds – each with their own hazards and bosses.

While the core gameplay loop of Part 2 is the same as every other entry in the Bubble Bobble series, there are several major differences that appear in few other titles. Bub and Bob now possess hearts that, once depleted, result in losing a life. Collecting additional hearts adds to their total enabling them to take additional hits without dying. Being able to soak up damage is a godsend in some levels as it allows players to immediately counterattack the enemy that hit them or remain on a difficult to reach platform.

Platforming is simultaneously easier and more challenging than in any other game in the series. Bub and Bob can now take a deep breath by holding down the B button and, if not released, they grow large and begin to float into the air. Early levels allow the brothers to float side to side without much resistance, but later stages force the ballooned brothers along invisible air currents. Some stages take advantage of this fact by placing spikes along the sides of platforms, requiring players to struggle against the current or be impaled and lose health or a life. In other cases, players can use floating to their advantage by reaching out of reach platforms rather than employing precise bubble jumps. 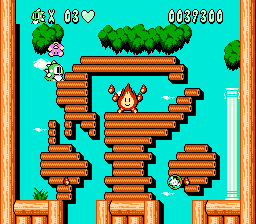 Further complicating platforming is another feature never seen in past entries – moving platforms. Many stages feature platforms that move about the stage, frequently trapping enemies and forcing players to ride them and carefully capture these enemies. Although moving platforms seem simple to navigate at first, they oftentimes are moving so quickly that it’s hard to land where you want to, and enemies often wedge themselves in positions where they cannot easily be bubbled.

Other new features include stage gimmicks like trash cans that, when knocked over, release a cloud of enemies nesting inside, moving gears that Bub and Bob can ride and then launch themselves off of, and even moving cars that the brothers can hitch a ride on.

Bub and Bob can also play a variety of minigames in yet another first for the series. Collecting several crystal items spawns a door that, once entered, enables the brothers to challenge a goofy, hyper creature known as Barcelon. Defeating Barcelon in any of the volleyball, basketball, or gem collecting games awards items worth a load of points – which is extremely important given the number of extra lives players can earn through specific totals.

Bosses have always been one of the worst aspects of the Bubble Bobble series, but the ones found in Part 2 are actually enjoyable to encounter. Many bosses have their own arena they are fought in, and the strategies differ based on each one. The pill-shapped Springit mech wanders around his arena, hopping up and down platforms while Bub and Bob are challenged to hit it in the face with the bubbles. Doh, the boss of Arkanoid, throws pieces of itself in an effort to bludgeon the brothers, while the alien/motorcycle-like Ruckus pursues Bub and Bub in a high speed chase. None of the bosses feel unfair to fight, and they each require players to battle them in different ways instead of hiding in a corner and spamming bubbles. 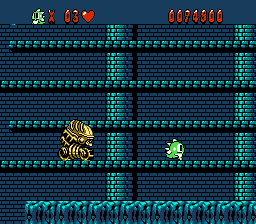 Bubble Bobble Part 2 enjoys the kinds of improvements one would expect from a sequel. The graphics have improved and have taken on a pastel-colored tint, and the music is varied and largely enjoyable, save for the title screen theme that sounds like a cat flopping around on a keyboard. New attack bubbles can be found throughout the stages including powerful star bubbles that spray stardust in a falling arc, wind bubbles that launch whirlwinds that travel along the ceilings of platforms, and dangerous skull bubbles that damage the brothers on contact. Items play less of a role in Part 2 than they do in the other games with candy power-ups, time-stopping clocks, and health-increasing hearts being the most common. Part 2 expects players to work through the stages rather than blasting their way through using power-ups and room-clearing items typical of other entries.

The most baffling aspect of Part 2, however, is its two-player mode. While other games in the series enable two-players to play simultaneously, two players take turns playing. During a two-player game, player 1 begins the game and plays until losing a life. Afterward, player 2 takes over – back at the beginning of the game. Progress is made independently and, in another bizarre twist, if one player beats the final boss it instantly clears the game for the other. Rather than adhering to the original game’s concept of cooperation, Part 2’s two-player mode feels almost competitive. This isn’t particularly fun, especially for couples buying the game and expecting it to enjoy it together.

Overall, Part 2 is a great game and worth playing. Obtaining a copy is will set people back quite a bit of money as Part 2 was released two years before the NES was discontinued in the United States. Copies are relatively scarce and extremely expensive. While Part 2 is certainly a good game, it’s hard to recommend dropping that kind of money for it. 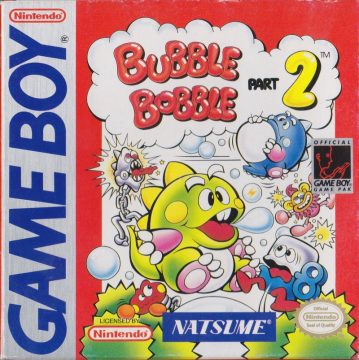 Despite bearing the same coverart and name as the NES game, Bubble Bobble Part 2 (known as Bubble Bobble Junior in Japan) has far more in common with the first game boy entry, Bubble Bobble, than it does with its namesake.

Like the original game boy game, each stage is so large that it cannot fit on the handheld’s display. Players still have the ability to pause the game and scroll about to locate power-ups and enemies, but this still suffers from slowing down the action. The graphics are also similar to the first entry as well, from Bub’s sprite to the bulging-eye capture animations enemies display when they are trapped in a bubble.

Despite these similarities, Bubble Bobble Part 2 for the Game Boy is an entirely new game. Bub’s sickly brother Bob needs him to find Moon Water to help him recover, so Bub takes off across four worlds to find it. Players are tasked with collecting a total of three keys that appear after defeating a boss. The method to trigger the appearance of these keys isn’t as simple as the first game boy game, however, with players having to collect a giant diamond item in previous stages before fighting the world’s boss. In true Bubble Bobble fashion there’s no indication you need to do this to get the keys to appear, save for a cryptic hint in the localized game’s manual. Collecting any less than three keys treats the player to a bad ending, which is fairly annoying given how difficult this game’s stages can be.

While Part 2 has entirely different levels than those in the NES version, there are some gameplay aspects that are similar. Bub can charge his bubble and release it for a longer-range shot, and completely filling the power gauge at the bottom of the screen encases Bub in his own bubble, enabling him to fly and ride the invisible air currents found throughout the stages. It’s important to note, however, that Bub is much slower when in a Bubble and getting hit in this state still hurts him. Stronger enemies make an appearance and must be pelted with bubbles to damage them, rather than capture and pop them like standard enemies.

Bub also carries over the health point system from the NES version, and can take three hits before losing a life. Health point items can be found randomly throughout stages, enabling him to take additional hits beyond just three. While these health points can be used by players to brute force their way through levels, they’re almost necessary for some of the more sadistically designed levels near the end of the game.

While Part 2 is a solid game, it’s better played in short bursts rather than as a marathon. Many of the stages are designed in such a way that they’re more annoying to traverse rather than fun to play. One of the most popular methods of “challenging” players is placing them at the bottom of a shaft where they have to fully charge a bubble to float up. There’s almost always an air current that pushes the player down in these instances, forcing players to hold up to push against the current and ascend extremely slowly. Worse still, numerous enemies often bounce around these tunnels, forcing players to take a hit and fall back to the ground or bail out and fall on their own to avoid damage. It’s more a waste of time rather than a challenge, and can quickly whittle down the player’s health and lives. In addition to the shafts are narrow spike-filled corridors that must be floated through. More often than not a sudden invisible air current change will fling Bub towards the spikes, giving the player little time to react and fight the current. Some enemies may zoom past you as you’re navigating these hazards, forcing you to backtrack through those areas to capture them so you can continue to the next stage. These annoyances add up quickly, and unlike other entries in the series players cannot simply continue on the same stage after losing all their lives. Part 2 instead uses a checkpoint system – often many stages further back from the boss stage – which causes struggling players to run through the same set of stages repeatedly.

While Bubble Bobble Part 2 is a solid game for the Game Boy, it’s best enjoyed in shorter sessions. Given the fact it was designed for a handheld, that might be by design.