In Japan, Taito took the character from Power Blade and put him in a sequel, this time calling it Captain Saver. However, when it came to America, it was retitled Power Blade 2. Unfortunately, Taito nerfed a lot of what made the original Power Blade so cool.

The game controls pretty much the same as Power Blade, although the hero seems to walk a bit slower. To make up for this, you have a slide technique, which allows you to move faster and slip underneath enemy fire. All of the stages (four selectable, with six in total, one less overall than its predecessor) are completely linear. Both Power Blazer and Power Blade had very bright, aesthetically pleasing graphics, with a variety of different tilesets. Here, the graphics are much darker and generic, so it looks much worse. The music is alright, but isn’t nearly as catchy. 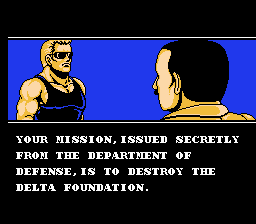 This time, the focus is on the power suits. In each level, you can fight an optional mid-boss, which is really just a variation of the dragon boss from Power Blade. If you win this battle, you get one of four specialized suits. They all have the same super powerful energy attack, but each also has special abilities – the Newt suit lets you climb on walls, the Wet suit lets you swim, the Rocket suit lets fly, and the Patriot suit will create a rotating shield about your character. Although these suits no longer absorb hits, they do drain energy, which needs to be replenished by batteries found throughout the stages. You can also switch between any of the suits at any time, or change back into your standard form. This actually gives a reason to tackle stages in different order, although in the end, it doesn’t make much of a difference. 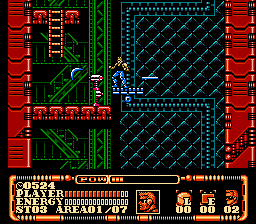 Power Blade 2 is still a fun game, but other than the additional power suits, it’s such a huge downgrade that it comes off as disappointing. It’s still better than Power Blazer, at any rate. Being that this is one of the last NES titles released in America, it’s a bit hard to find an actual cartridge.