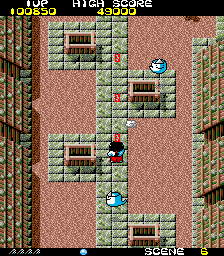 Kiki Kaikai (“Mysterious Ghost World”) certainly wasn’t Taito’s first foray into run-and-guns or shoot-em-ups, but it stands out as their most unique take on those prevalent genres. Instead of the sci-fi, militaristic, and western imageries often considered intrinsic to these particular games, Kiki Kaikai is draped in an appreciation for Japanese folklore and the Shinto religion. The protagonist of the series is the Shinto shrine maiden known as Sayo-chan, who fights using ofuda talismans and a gohei wand. Instead of aliens or spacecraft, Sayo-chan faces off against a variety of youkai based on Japanese folklore, including but not limited to entities like the Kasa-obake (a one-eyed umbrella), the Chochin-obake (a ghost lantern), and the Rokurokubi, a woman who can stretch her neck to inhuman lengths. Later adventures have Sayo-chan joined by other characters and subsequently offer cooperative play, the most prominent being a tanuki named Manuke who fights using leaves and his tail as a replacement for Sayo-chan’s tools. The soundtracks, visuals, and atmosphere for each game also reinforce the series’ unique identity; Japanese instruments such as the shamisen are used regularly and each game combines the occult horror of youkai with colorful visuals similar to later cute-em-ups like Cotton. 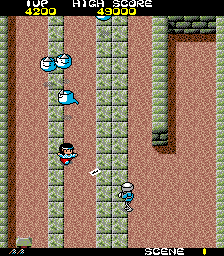 The story of the first game in the series has Sayo-chan rescuing the Seven Lucky Gods (Daikokuten, Hotei, Ebisu, Benzaiten, Fukurokuju, Jurojin, and Bishamonten) from the yokai who have kidnapped and imprisoned them. The quest takes you through eight stages full of enemies to dispatch and bosses to overcome. Sayo-chan’s ofuda serve as her projectile of choice and she can throw them with impunity, though she can’t strafe and needs to move in the desired direction to aim, oftentimes putting her closer to danger. This is where the gohei comes in, allowing Sayo-chan to fend off nearby enemies and sweep them away like they’re leaves in the wind. Your gohei can be repeatedly swung, but it isn’t foolproof since bosses can’t be hurt with it, enemies can exploit the brief gaps in between swings to attack, and projectiles can’t be repelled (yet) either. Ultimately, the key to success in Kiki Kaikai lies in knowing how to use your weapons, when to advance further, and when to pull back.

The ability to control the pace at which the screen scrolls is a core part of the strategy of Kiki Kaikai and the game’s mechanics elegantly tie into this design decision. Enemies come in large batches and charging forward blindly is a good way to get killed. Depending on the situation, you may find yourself pushing forward to defeat Hitodama-inspired Otamas for power-ups, then pulling back when more youkai show up to give you time to dodge projectiles. Sayo-chan moves slowly and there’s no way to increase her movement speed, so it’s important to be proactive and play defense as much as you play offense. Some levels even contain Rumuru, small youkai that cling onto Sayo-chan and reduce her already slow movement speed further until she can exorcise them by walking through a torii gate. 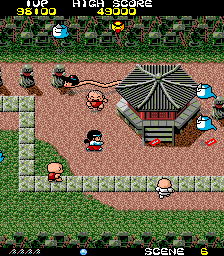 Taito was smart enough to not let you just hang back the entire time and several enemies are designed specifically to pressure overly cautious players. The Hashiritai are fish with human legs that love to hop in from the corners of the screen, potentially catching the player off guard if they’re trying to hide towards the bottom of the playfield. Taking too long to advance forward summons Garakotsu to your position, which are immortal zombies that speed up every time they’re attacked. These youkai are rarely a problem for a player playing at the appropriate pace, but for those learning the ropes, they can be a lesson most cruel.

Bosses put your skills to the test, enclosing you in a small arena with massive opponents like a fire-breathing tengu, a Raijin-inspired foe who slings thunder that leaves the ground burning in its wake, a Yamauba (mountain hag) who throws knives in hard to dodge fan patterns, and a kitsune that can only be hit when it’s moving. These clashes are fast and furious, never taking too long to resolve whether you win or lose. As each battle rages on, the center of the floor will start breaking to signify how close the boss is to defeat, serving as a clever way to provide information without resorting to a health bar. In a surprise twist for those who started with the SNES entries, the final boss is none other than Manuke posing as Sayo-chan, resulting in a notably different fight in which you have to use your gohei to slam him against the wall before he does the same to you. 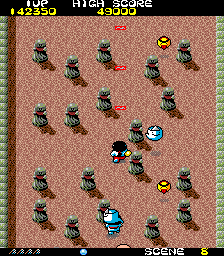 Items can be found from defeated enemies or extracted from statues scattered about with a brush of your gohei, all of which provide abilities that make Sayo-chan a force to be reckoned with. The most common power-ups are multi-colored ofuda that grant different enhancements to your projectile attack. Red ofuda give your projectiles piercing properties, yellow ofuda increase projectile size, and the double ofuda increases Sayo-chan’s throwing speed. The blue ofuda is the most interesting power-up, serving as both a boon and a curse depending on the player’s actions. Collecting blue ofuda increases the range that your projectiles travel, but collecting too many actually increases the health of the stage’s boss! Aside from these ofuda, there are also blue and yellow crystal balls that can freeze enemies temporarily or destroy all onscreen enemies respectively, as well as the typical point bonus and extra life items. Each level also has a key that needs to be collected in order to access the stage’s boss, though these keys are always out in the open and are impossible to miss. Stage eight eschews a boss encounter in exchange for a continuously scrolling corridor that can only be ended by collecting three hidden scrolls, providing an interesting twist for the game’s finale.

A year after its arcade launch, Kiki Kaikai was ported to the MSX, and as you’d expect from the shift to weaker hardware, the visuals, music and scrolling have taken noticeable hits, though it’s still a respectable port overall. Fewer colors are present and the environments have a bit less detail, but their designs remain faithful otherwise. This version feels even more challenging than the arcade game since enemies and their projectiles move faster, making them harder to dodge and react to. Due to the arcade version’s vertically oriented display, this and all subsequent ports to different consoles that aren’t straight arcade ports suffer from smaller screen sizes.

In 1990, a version for the PC Engine was released that is arguably an improvement over the arcade original, offering slightly improved visuals and sound that better brings out the music’s instrumentation. Enemy counts tend to be higher than in the arcades too, though this does come at the cost of occasional slowdown that wasn’t present previously. Thankfully, this version also balances out the difficulty by allowing players to continue twice compared to the arcade game’s inability to continue unless you luck out with your score. Stages have been expanded here, offering branching paths that lead to different arrangements of enemies and power-up opportunities. Some other changes to the presentation include the removal of the seamless stage transitions, a different credits sequence, and the combination of stages seven and eight into one longer level.

Kiki Kaikai received multiple ports to Japanese mobile devices during the early 2000s and these ports are faithful to the arcade game. In 2003, North American phone users also received a version of the game, but what they got is vastly different and much worse for it. Dubbed Kiki Kaikai: The Bizarre World, this version of the game is compromised in every regard, offering minimally detailed graphics (the ofuda are blank so it just looks like Sayo-chan is shooting nondescript white rectangles), music tracks that sound shrill and are significantly shorter, and controls that make playing the game difficult. The level design has also been completely altered, consisting of tiny rooms in a straight line divided by screen transitions instead of seamlessly scrolling. There are also fewer enemies per screen and they’re much more passive than usual, removing all of the thrills and challenge from the stages. Some quality of life of features have been added to this version, such as an auto fire option and the ability to resume the game from the furthest point you’ve reached, but these features do nothing to make this version worth playing as more than a curiosity.

Taito struck a deal with Bandai to distribute some of their games via a series of plug & play devices in 2006 known as the “Let’s! TV Play Classic” line. The Taito Nostalgia 2 device offers the arcade game alongside a new version of the game called Kiki Kaikai: Kakurenbou. This exclusive version allows you to play through the game as BonzeKakurenbou from Taito’s Bonze Adventure. Bonze’s projectile is a three way spread shot that fires much more slowly than Sayo-chan’s ofuda and his gohei equivalent swings prayer beads around in a circle. Better crowd control sounds good on paper, but the difference in firing speed means that Bonze struggles greatly against bosses. His prayer beads covering his rear can be useful at times, but his constant rotation means that he’s always leaving some part of his body open to attack compared to the consistency of Sayo-chan’s gohei. While the novelty of a new character is a worthwhile idea, Bonze just makes an already difficult game downright unpleasant. Perhaps to compensate for this, you’re able to insert unlimited credits, continue on the spot, and save your progress after each stage. This version adds a new boss based on the Maneki-neko at the end of the game and you can also unlock the ability to use Sayo-chan against this new boss as well.

The other ports remain faithful to the original, offering few or no additions or conveniences. The game has been a part of four Taito compilations over the years (Taito Memories Vol. 1, Taito Pocket Memories, Taito Legends 2, Taito Legends Power-Up), was included in the recent Taito Egret II Mini, and also saw a port to Windows as part of MediaKite Distribution Inc.’s “Super 1500” series of releases. An Arcade Archives version is available on PS4 and Nintendo Switch courtesy of Hamster Corporation and offers the usual bells and whistles that their ports do plus the ability to play a bootleg version of the game called Knight Boy. The only difference within Knight Boy is its title screen (you still play as Sayo-chan despite the name), but it’s an interesting historical artifact to have preserved nonetheless. 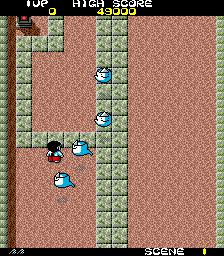 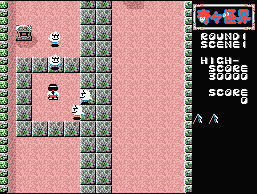 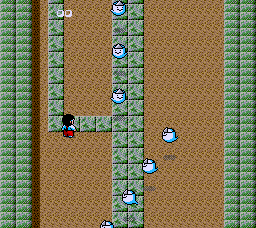