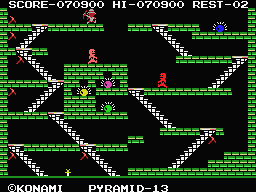 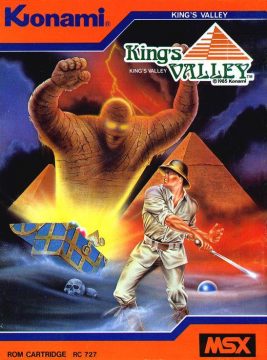 Released exclusively for MSX computers in 1985, this action puzzler is one of Konami’s more inconspicuous early games. In King’s Valley, players take control over a cute little archaeologist / grave robber, who sets out to explore a pyramid for jewels larger than his head, all the while trying to evade the curse of the pharaoh.

This particular pyramid has got to be a mass grave, as said curse takes the form of an army of mummies, who are constantly hunting down the little adventurer – or at least some of them are, as similar to the ghosts in Pac-Man, they follow color-coded behavioral patterns. White mummies just seem to wander around aimlessly, while blue ones are more focused, and the walking corpses in red run down stairs faster than you can say Tutanchamun. Luckily, throwing knives are lying around everywhere, providing an adequate means of defense against the living toilet paper dispensers. They’re never gone for good, though, as they respawn shortly after they go down.

Few of the Jewels are lying in plain sight. Sometimes they are hidden behind one-way doors, other times our adorable tomb raider needs digging tools to get to them, namely pickaxes that also lie around inside the pyramid, presumably leftovers of his less fortunate forerunners. Each of them is good to dig into one square of brick; but be careful, as one can only dig the square diagonally in front of the protagonist. When there’s no space to maneuver, he’s as good as dead. Usually, he may be able to jump at one square’s height, but when carrying items he’s stuck to the ground.

Only after scavenging all the jewels, the door to the next level opens up, or more commonly two doors, one of which always leads back to the previous room, without any way to tell the two apart. That’s frustrating, but really necessary to give the game some illusion of lengths. The pyramid consists of only 15 rooms, and while some of them fill two screens, they’re solved in no time once one understands what to do in each of them. For the few hours it lasts, it’s a neat little game, though.

In 1998, King’s Valley was included in the Konami Antiques MSX Collection Vol. 3 for PS1, followed by the Ultra Pack on Saturn. Four years later it got the mobile game treatment. The graphics here aren’t scaled down, and instead the game is zoomed in, making it harder to get a general overview of the levels. While the MSX original had been published in Europe, neither of the rereleases made it outside of Japan. An unofficial port exists for the ZX Spectrum, made in 2009 by Retro Works. There’s also an MSX disk version which contains 60 levels instead of 15, plus a level editor. This version is also included in the compilation Konami Game Collection Vol. 1. 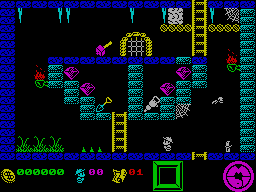 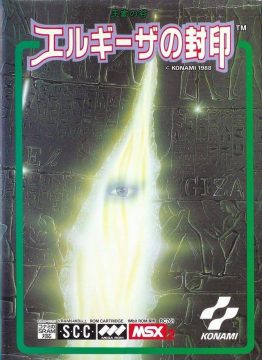 King’s Valley II follows the same premise and basic concept as the first game, but refines every aspect of it. (The screens on the opposite page are from this version.) Most importantly, it’s much longer. Stages consist of up to six screens now and there are 60 of them. Some even wrap around horizontally or vertically for added confusion. Since the game can’t be completed easily in one session anymore, passwords are used to restore your progress. A level editor is also included.

The mummy population has been decimated since the last excavation, left are only white and golden specimen. Instead the explorer is frequently attacked by jumping statues and rocks that come to life sporadically. In addition to the familiar knives they can now be fended off with boomerangs, too. 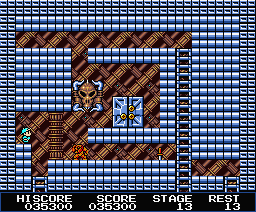 Apparently the graverobbers in this pyramid were much better equipped, too. Pickaxes still do their job, but now the player can also find drills to make a way through the soil in horizontal direction. Shovels and hammers fulfill the same tasks, only they cut merely through half of the block. There’s also a variety of new traps and devices: Bridges collapse after walking over them twice, some one-way doors swing back after passing through, and movable bricks block the way. In general the level design is more convoluted, but also more interesting. The final stages are real brain teasers. Only every once in a while the game disappoints with bad design, mostly when it forces the player to wait for the enemies’ tendency to combust spontaneously.

There have been versions for both the MSX1 and MSX2 standards. Since the stages don’t scroll in either version, the main difference is the bigger color palette for the latter, and the higher resolution, which allows it to display the status information on screen. The first game used very minimalistic pictograph visuals, while the graphics now use a distinct chibi-style. Everything’s bigger and more colorful, even on MSX1. The music now changes every couple of stages, other than the predecessor, which used the same tune for the whole game, but some deviate completely from the Ancient Egypt flair of the early ones, two of which were remixed later for the Egyptian levels in Castlevania: Portrait of Ruin. In one of the stages, one can also find a secret door to a hidden music test. 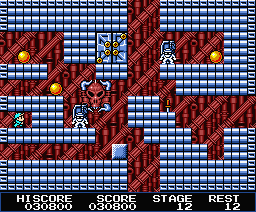 When The Seal of El Giza was released in Japan, four MSX magazines in cooperation with Konami held a competition for user-created levels, and the winning entries were put on a special golden cartridge the next year. It appears that these were only given out to the 20 winners, as the known dumped version contains a personalized virtual certificate to one of them. 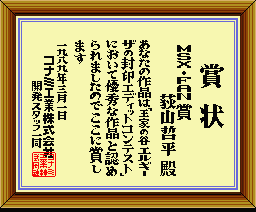 King’s Valley II is a great improvement over the first game, and it is puzzling that Konami never included it in any compilations since. The only other version is once again an unofficial one. Published by Aproman 1989 in Korea, the MS-DOS King’s Valley (lacking the number in the title) comes with monochrome graphics, only one enemy type and mostly new stages. Another unofficial version appeared on the Spectrum in 1994, in Belarus. Although it is likewise titled just King Valley, it is based on the second game, once again taking its own liberties. 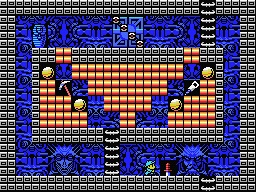 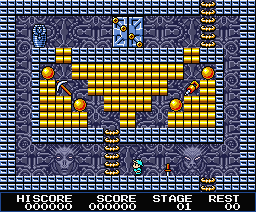 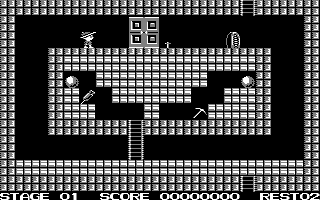 Aside from the unofficial ports of the existing games, there is also a number of more creative fan games. The first of these was Ōkyū no Sokuseki: The Everlasting Palace (王宮の足跡: ジ エバーラスティング パレス) by the Japanese doujin developer Crystal Light Stage. This expands the levels far over the borders of the screen, and greatly changes the dynamics of play. It’s now possible to jump while holding a tool, and the explorer can even jump directly over skeletons, which makes for a much more action-oriented game. There are a lot of new elements introduced, like floors that crumble when being stepped on, or torches that burn down wood but have to be rekindled at a fire after a while. 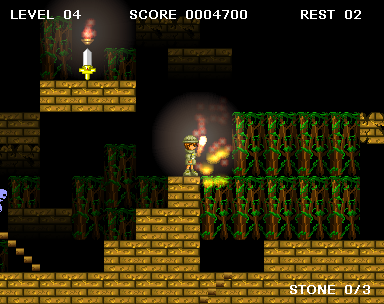 The 2004 shareware rip-off Pharao’s Curse for Windows is much closer to Konami’s original games. It uses pretty much the exact same mechanics, but comes with a completely new set of 70 levels. The general look of King’s Valley II also inspired GR3 Project’s 2005 freeware release La Mulana, which also paid homage to several other MSX games, Konami’s in particular. 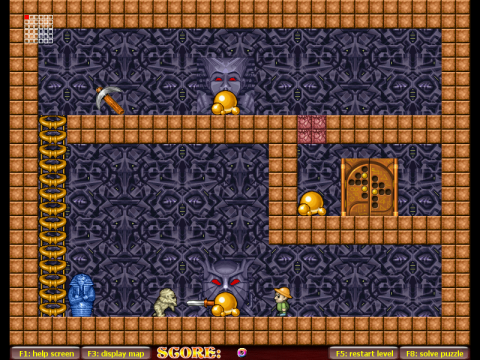