The Goonies was an inspirational movie for anyone who grew up in the 80s. Musty attics were filled with maps to untold fortunes. Every forest, every landfill, every swamp, was an unexplored treasure trove. Beneath every sewer grate lay an impossible maze of tubes and caves, filled with the bones of dead explorers who foolishly perished trying to find secret pirate treasure. It’s the very essence of the child-like ability to look at something normal and envision it as something extraordinary, the ability to see adventure around every corner. That is, until the cynicism of adolescence and adulthood set in. 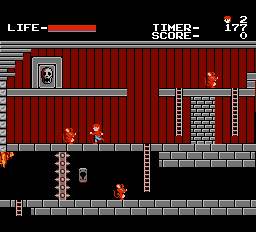 The Goonies was quite popular, and naturally, there were a handful video games made around the time of the movie in the mid- 80s. Four different games, to be precise, which is rather astounding considering that there was only a single movie. Three of these were created by Konami, who had yet to flesh out their soon-to-be-popular Castlevania and Contra franchises, but still possessed some pretty interesting game ideas. Nearly all of the games featured some rendition of Cyndi Lauper’s “Goonies R Good Enough,” which is awesome to hear in old school PSG synth.

While The Goonies games never quite captured the appeal of the movie, all of them offered some interesting gameplay mechanics, with plenty of secrets to uncover. And while the American computer versions did a better job of tying in with the movies than Konami’s interpretation, the Japanese company did well enough to emulate the adventurous experience of the movie, while creating titles far more in-depth than your average 8-bit game. 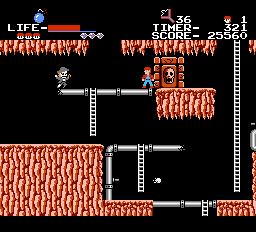 The Famicom version of The Goonies is a bit more in-depth than your average platformer. You play as Mikey as you go through six stages to rescue all of your kidnapped friends. Each level requires you to find three keys and rescue one Goonie before you can go to the next stage. The first level is the restaurant, the last is the pirate ship, and every level in between takes place underground. Although the first stage is only a few screens long, later levels get a bit more complicated, with skeleton doorways that warp Mikey from place to place.

Although Mikey can only kick his foes at the beginning, you’ll eventually find bombs to open doors (which can easily kill you if you’re not careful) or slingshots with limited ammo. In addition to fighting evil rats, bats, and foxes, you also need to go against the Fratelli family, who inflict a significant amount of damage and can only be temporarily disabled rather than permanently killed – one of them even attacks by singing. You’ll also need to avoid pirate ghosts in later stages. 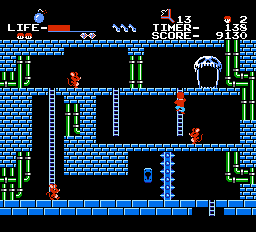 There are a handful of secret items you can find that will help you through your journey, including headphones (to guard yourself from the aforementioned musical attacks), a raincoat (to protect against steam vents), a helmet (to block falling objects) and a backpack (to hold two bombs instead of one). However, once you beat a level, it’s impossible to go back and get them. Each level is also littered with hidden gems, which refill your life when you collect enough of them.

Oddly enough, this version was only released for the home consoles in Japan, but saw an American release in the Nintendo Playchoice 10 Arcade system, as well as the Vs. systems. It was also ported to the PC-88 and Sharp X1, but both have worse graphics and animation. 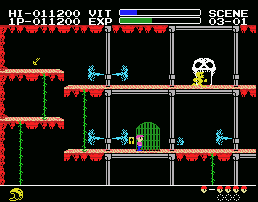 The MSX entry of The Goonies borrows the basic concept from the Famicom version, although it features completely different levels and a number of other changes. You still need to explore levels, but the stages themselves are significantly longer and more complicated, as you need to rescue seven Goonies per stage instead of just one. There are still plenty of hidden items to find, but you never get any additional weapons, so you’re stuck with the crappy kung fu kick for the entire game. You also need to use keys instead of bombs to open doors, and you can only carry one key at a time. There’s also an experience meter that increases every time you kill an enemy. Filling this will grant a minor health restoration. It may not seem like much at first, but this game is tough, and you need all of the health you can get – nigh-invincible Fratelli brothers are just as much of a pain as they are in the Famicom version (they’ll even follow you from screen to screen), and the bouncing skulls are just as annoying. You only get one life, although thankfully there’s a password system so you can skip ahead to later levels. The graphics aren’t quite as good as the NES game, and the locales aren’t as varied either, with most levels simply being palette swapped variations of the same cave tileset. Although the player sprite is exactly the same as the other games, leading you to believe that you play as Mikey, the English language manual seems to think you’re playing as Sloth.

In 2006, the independent development team Brain Games remade the MSX version of The Goonies for Windows and released it as freeware. It perfectly replicates all of the levels but uses new high res graphics, some neat visual effects, and vastly improved sound. The sprites now look like super deformed versions of Sloth and Ma Fratelli, and there’s a new song which arranges some of the orchestral music from the original score, which is quite excellent. It also includes a level editor. 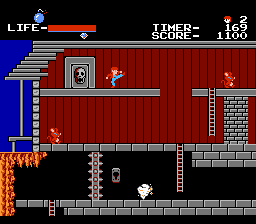 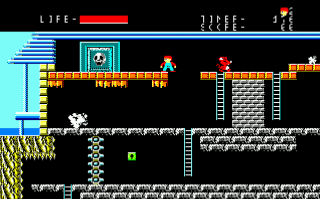 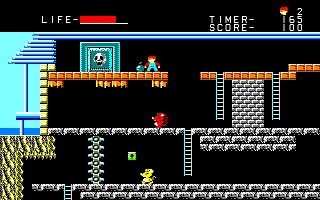 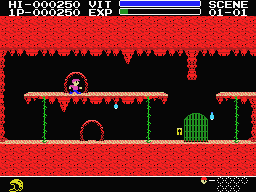 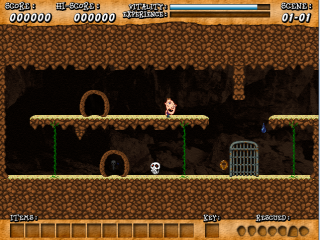