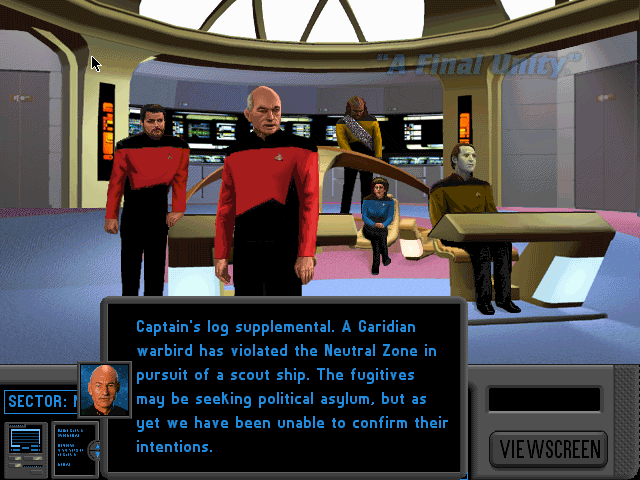 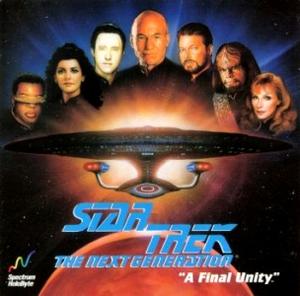 Although it’s developed by a completely different team – Spectrum Holobyte as opposed to Interplay – Star Trek The Next Generation: A Final Unity is very similar to the two previous adventure games. It features incredibly authentic visuals, technology, and writing, and of course includes all of the original cast members providing the voices. The story is divided up into chapters which connect into one overarching narrative, although they aren’t given separate episode titles anymore. Away missions have you controlling multiple characters, each with their own skills. Most chapters also have variable outcomes depending on your decisions, although they don’t have much impact on the overall story.

The biggest changes, obviously, come with the shift in tone from the original series to The Next Generation. The visual design is much darker, and while they benefit from a resolution bump to optional SVGA, the computer-rendered backgrounds just aren’t quite as attractive. The dialogue and general atmosphere is less campy, with more of a focus on technobabble. Furthermore, while the puzzles in the Interplay games weren’t exactly great, they’re even weaker here. While rarely infuriating, most of the time they’re just flat out boring, either requiring that you talk to the right person for the right solution or in a few cases, simply waiting around for an answer to reveal itself. There are multiple difficulty levels, with the easier ones automatically picking the optimal away team roster and equipment. In the end this helps the experience, because running into difficulties because you made the wrong decision is quite tedious. The interface has technically been improved, although your characters walk incredibly slowly.

The battle sequences have been replaced with some kind of real-time tactical minigame, which is full of so many inexplicable buttons and gauges that it’s practically inscrutable. Thankfully, you have can Geordi or Worf take over the controls, and there’s even a cheat code (“make it so”) to re-equip the Enterprise and give it an advantage. 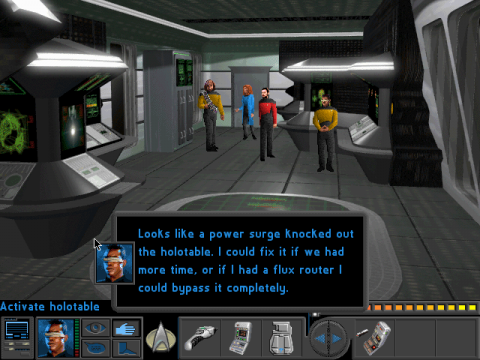 The overall plot revolves around a long-gone race called the Chodaks, elements of which were borrowed from The Next Generation games for the Genesis and SNES, despite them being completely different games otherwise. It begins when the Enterprise encounters a ship of Garidian rebels who are seeking the Fifth Scroll, a long lost document that would help their cause. This begins the search for the Chodak, as the Enterprise gets pulled off into other directions to save people or investigate various situations per usual Star Trek protocol. Though the story is not broken up into discrete episodes like the other two Star Trek games, there are still various scenarios you’ll find yourselves in – one involves rescuing a space station where one of its sections was apparently removed whole and stolen, and another involves a race of ape-like creatures in a matriarchal society. It’s supposed to take place during the show’s final season, which was airing when A Final Unity was released.

While a solid game, again quite faithful to the series, it lacks the energy of Interplay’s games – the missions are occasionally dull, and it’s never as creative as the better episodes of the TV show. Still, it’s a solid product, as many regard it as the last good Star Trek game.