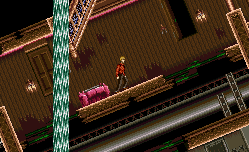 SOS, known as in Japan (and not to be confused with the cutesy SNES/PC platformer S.O.S – Sink or Swim) is an almost-masterpiece, a meshing of brilliant ideas and questionable execution. The premise is simple – it’s the 1920’s, and you’re a guy on a decadent cruise liner known as the Lady Crithania. Something goes wrong, of course, and the ship begins to sink. You have one hour, in real time, to escape the ship, while rescuing as many survivors as possible. Halfway through the game, the ship begins to sink and floods with water. If the time runs out, you’re dead. Before one cries foul and thinks this was meant to capitalize off the success of the Titanic film, SOS was released two years before it hit the theaters. If anything, it’s based more on The Poseidon Adventure, the novel from 1969 which was later translated into three different movies. 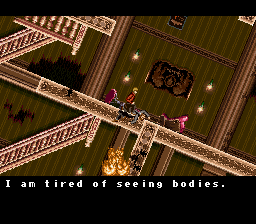 There are four characters to play as. Capris Wisher is traveling with his sickly sister, whom he is growing increasingly resentful towards. Redwin Gardner is a “counselor” (or a pastor, in the Japanese version), based on Gene Hackman’s Reverend Scott character from The Poseidon Adventure, and Jeffery Howell is a doctor who’s traveling with his wife. And Luke Heinz is the lone playable crewman, who must accompany Ismay Townsend, the ship’s captain (who was named after Joseph Bruce Ismay, the owner of the Titanic who refused to go down with his ship and fled).

As soon as the ship capsizes, you can head directly to the exit, if you want, but you’ll get the worst ending as a reward for your selfishness. The real way to play is by hunting down the various survivors, and bringing them with you. Naturally, this is easier said then done, because some require a bit of questing – or, least, convincing – before they’ll join you. One woman refuses to leave without her husband. Another one won’t leave without her friend, who’s entered into a state of shock. Although each of the four characters controls the same, their stories and goals are different. For example, in order to properly finish Capris’ story, you’ll need to find his sister, as well as a number of other people. If you manage to escape without her, the story ends with him become overwhelmed by his guilt, and he returns to her arms, spending their last few minutes together. Naturally, it’s much less grim if she makes it to the exit. Each character has approximately four or five main endings, depending on how many survivors you’ve rescued. 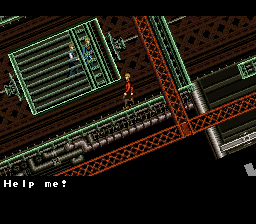 In practice, SOS draws a lot from Prince of Persia (the time limit, the basics of the control scheme) but has also elements more similar to Human’s later Super Famicom title Clock Tower (the branching paths and multiple endings). The controls are simple – you can jump, climb, call for survivors to follow you, or help them over certain obstacles. (Strangely, there’s no run command – you’d think that your character would be in kind of a hurry, given the situation and all.) There’s no combat, at all, but you can still be hurt. Stepping in fire will knock you out and deduct five minutes from your timer, as will falling from great heights. Late in the game, when the ship begins to flood, you can also drown, if you spend too much time in the water.

The catch is, of course, that the ship is sinking. The ship is upside down, and slowly tilts and rotates at seemingly random intervals. Even though the graphics aren’t technically that impressive, it makes fantastic use of the SNES Mode 7 rotation effects. 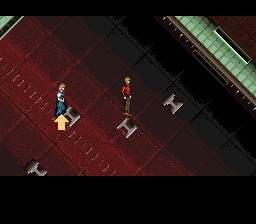 And this is where the problems come in. It takes a little time to get adjusted to the controls, which are less sluggish than Prince of Persia, but still a bit awkward. They mostly work fine when the ship is perfectly level, but it’s substantially more difficult when the whole area turns at a 45 degree angle. However, in the late segments of the game, SOS sticks its middle finger up at you, with a number of extremely aggravating platform challenges set in the ship’s boiler room. Once you reach the top, steam starts shooting out, and unless you know exactly where to be, it’ll hit you, and you’ll lose precious time. And if you’ve been playing the game properly and tracking down everyone you can, time isn’t something you have a lot of.

What’s more is that much of the game is one big escort mission. To properly “rescue” a survivor, you can’t just stumble across them and tell them that everything’s going to be okay. They need to follow you, throughout the entire rest of the game, until you reach the boiler room. Like most AI-controlled companions in video games, they aren’t terribly smart – you’ll sometimes find them trying to make impossible jumps, or otherwise get caught on some kinds of obstacles. At least you can help them up by holding down the Y button, so they won’t always get stuck. Much like your own character, it’s possible for them to die if they fall too far. In fact, if the ship tilts vertically and you end up plunging to the floor (this is hard to avoid completely), they’ll probably fall too. Except you’ll wake up five minutes later, only slightly shaken, and they’re dead forever. Oops. 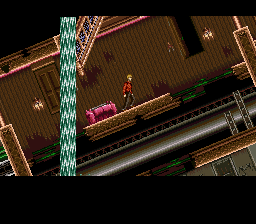 Anyway, the developers must’ve realized that their pathfinding routines weren’t very good. So, if you trek ahead, enter the next room, and call for them, they’ll usually transport right next you, bypassing wherever they were stuck on in the previous room. (On the other hand, if you wander too many rooms away, you’ll lose them forever, and this doesn’t work consistently anyway.) This is a welcome touch, but if you’re going to break the game’s vibe for this, why not do it for other things? Why not just escort the passengers to a designated “safe room” so they don’t have to wander as far?

Amidst all of this, it should be noted that there are only maybe three pieces of music played throughout the entire game. This would be a huge crime, except the main theme sounds a bit like it came out of ActRaiser, which is certainly okay by anyone’s standards.

And that’s pretty much the whole deal behind SOS – a brilliant concept marred by the actual game at hand. But that doesn’t mean it should be dismissed or ignored. Some of the aspects here are so important and innovative that they deserve special mention. 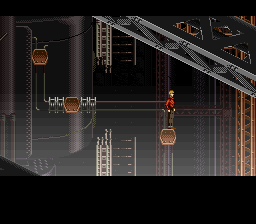 Furthermore, each survivor has a point value assigned to him or her, although it’s invisible to the player. Some, like the women or children, are worth a whole lot more than one of the jerkass crew members. Considering you can only rescue a total of seven people per game, it’s pretty unnerving that you essentially determine the fate of each character based off their “score”, if you want to get one of the better endings. There’s also a pretty incredible amount of detail. At the beginning, before the ship gets hit, you can run around the ship and talk to any of the passengers or observe them going about their daily actions. All of them have unique dialogue, and it’s cool to see them enjoying themselves, completely unaware of the disaster that will very shortly take place. 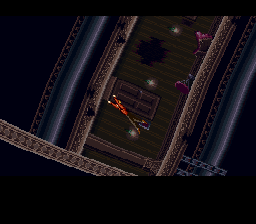 SOS is also one the prime unacknowledged leaders of the “survival” genre. It’s also a forebear to Capcom’s Dead Rising, released over a decade later for the Xbox 360. Dead Rising also takes place under a time limit of three in-game days, which amounts to approximately six hours of game time. Both are open-ended on how you get to the conclusion, and both involve rounding up survivors at your discretion. There are a number of major differences though, primarily being that Dead Rising features some light RPG elements. Saving people will give you points, which in turn increases your strength. At any point, you can restart the game, but keep all of the upgrades you earned in the previous games. And getting the best ending requires following very specific events, rather than saving people.

While the core ideal is the same, SOS is much more focused. People complain about Dead Rising‘s save system, but SOS doesn’t have one, at all, since a single play will never take more than an hour. The idea is, in SOS, you can play the game in once a day and have a completely uniquely experience each time. Dead Rising is pretty similar, with its numerous branching events and boss fights, but is meant to be played over a longer period of time. 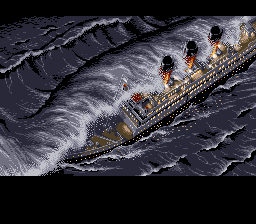 In turn, Dead Rising is actually a permutation of some of the ideas found in another Capcom title, Breath of Fire: Dragon Quarter, which was released three years earlier for the PlayStation 2. It’s fairly short for an RPG – it can be beaten in less than a dozen hours – but each concurrent playthrough not only lets you carry over skills, but also rewards you with more cutscenes, further fleshing out the story. However, other than the extra battle tactics due to your expanded skillset, the actual game doesn’t change with each playthrough.

In some ways, it borrows the philosophy from Rogue-like RPGs, where each experience is meant to be unique. However, it’s mostly up to the player to find their way through the game and discover different routes. The tilting of the ship adds a small element of randomness to it – certain areas may be inaccessible at a given point – but it would’ve been even cooler if the locations of the passengers changed every time you played. That way, you really would have a new challenge with each new game. At the same time, though, while multiple playthroughs may not yield tangible benefits like they do in Dragon Quarter and Dead Rising, they do give you a better understanding of the layout of the ship, and your rescue attempts will definitely improve once you’ve figured out exactly where to go and when. It’s pretty cool to see these concepts taken into different genres, and it would’ve been nice to see Human get another chance at it. And they did, eventually, although they completely missed the point of which made it so compelling in the first place. 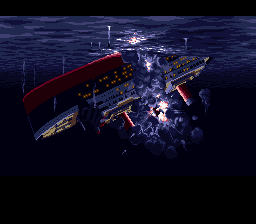 There are a handful of small changes between the Japanese and American releases. The intro text is slightly different. The bar of the ship is locked in the latter release, perhaps due to Nintendo of America’s policy on alcohol, though the other “mature” themes, like the suicides, are still present. In the Japanese version, Redwin also appears to be a bit of an alcoholic, and the two drunks that inhabited the bar have also been removed. The credits sequence is also cut short, as the Japanese version listed all of the character along with real life names of the “actors” portraying them, probably meant to feel more movie-like. These are all parodies of real American movie actors, like Kein Casnner, Chack Norris, William Dahoe, Michael Kain, Brock Shields, and Bill Muroni. One of Redwin’s endings also seems to have been removed.

Thanks to ReyVGM for various help and information regarding the Japanese version changes.

Links:
VGMapper Includes numerous maps and all of the characters to find.