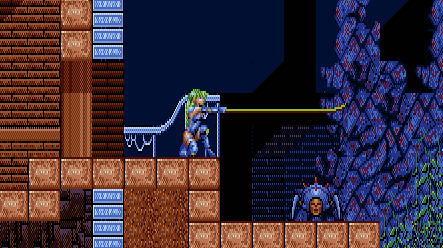 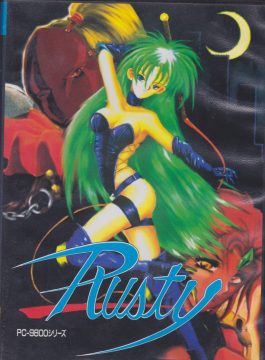 The PC98 and other Japanese home computers are known for having obscure rarities available nowhere else, and Rusty by C-Lab is one such hidden gem. It takes the whip-swinging mechanics of Super Castlevania IV and combines them with the open-ended level structure of Vampire Killer on the MSX2. It also mixes in bits and pieces from every other entry in the series, minus Simon’s Quest and Symphony of the Night onwards. The biggest change is that instead of controlling a strong-willed muscle man in tight leather, you control a strong-willed sexy woman in tight leather. Yes, the dominatrix archetype so beloved by the games industry is here in full force – and with a large amount of bare breasts in some places too. 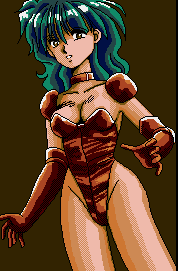 The game controls fairly smoothly, with little noticeable lag, the ability to hold down attack for constant whip swings, plus running by holding a horizontal direction along with up. Jumping is still tricky, since not only is it linear like in Castlevania, but it doesn’t always respond as you’d expect. Sometimes you’ll be running along at full pelt only to perform a little hop and fail, other times you’ll soar into the air to clear an obstacle. Generally, this isn’t a deal breaker if you’re aware of it and pay special attention to the trickier jumps. Also, holding down the jump and attack buttons simultaneously unleashes a “power crash” move depending on the power-up collected, exactly like the Dracula X games, either slowing down time, sending out exploding balls of energy, or granting temporary invincibility (with cool trail effects).

Persevere and the game reveals some astonishingly excellent level design. Eight of the game’s ten stages revolve around your basic key-and-locked-door structure, with the goal being to find keys based on the four playing card suits (spades, clubs, diamonds and hearts), which open various doors. The ingenious thing is how each level is shaped, doubling back on itself almost like a bizarre pretzel. Most early Castlevania games are extremely linear, and although there have been awesome set-pieces in the series, like swinging through a rotating corridor or exploring a wrecked galleon, it’s almost always a one-way corridor crawl. In contrast Rusty manages to convey a sense of exploration in almost all stages, without feeling like it’s backtracking, plus there are rewards for those who investigate off the beaten path. 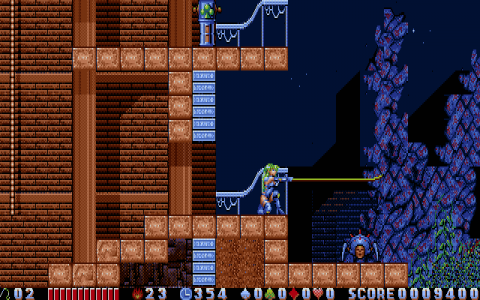 Stage one begins in some kind of possessed village, filled with monkey-like demons atop rooftops, giant faces spewing fireballs from walls, and spiked wolf things. It also introduces you to the gold rings which can be swung from using your whip, Simon Belmont style. You can play this level straight, like a basic action platformer, and get right to the end for the boss. But if you’re smart you’ll climb the rope at the end and double back across the rooftops with the spare Green Clubs key, ignore the subterranean Green Clubs door in the middle of the stage, and continue further back to a previously locked balcony. Going through you can now jump on some background scenery to reach a secluded roof and more hidden keys which – when returning to previously ignored subterranean door – allow you access to a secret area. Most stages follow this kind of logic: you can reach the end by using keys as soon as you find them, for a quick easy completion, but a little patience and exploration reveals alternate routes and secrets.

The first boss is a naked demon woman with fake boobs riding atop some kind of winged, flying bio-mechanical dragon chariot thing. She fires arrows while her life-partner blasts you with electricity from his mouth. And here’s another area where Rusty has perhaps a slight edge. The Castlevania games have always been thematically derivative, ripping off nearly every horror story throughout history. Along with Count Dracula and the Grim Reaper you battle everything from Ancient Greece’s Medusa to the monster of Dr Frankenstein. You do this in every installment, and it’s part of the reason the series is so beloved – it resonates with our knowledge of the source material. Having said that, it’s also nice to see some originality sometimes. While Rusty has the standard share of skeleton swordsman and other undead enemies, there’s a lot of quirky additions such as the aforementioned boob dragon. Another unusual enemy is the little spike beetles, reminiscent of Mario’s enemies, which can only be stunned not killed, and require careful jumping over. Special mention must also go to the graphic design for the enemies and stages, since despite the limited palette of the PC98 (only 16 colors), clever use of dithering makes everything look exquisite. 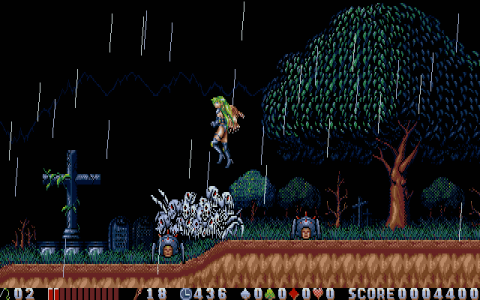 For the third stage you’re in some kind of country manor, well before the final enemy’s castle, and it introduces a cool block pushing puzzle. After using a spring-pad to launch yourself into a new area, there are a series of boxes which need pushing into a spike pit to create a bridge. Problem is they’re blocked by adjacent boxes which need careful destroying. After this the remaining boxes can be pushed along. Be careful, since one touch from the spike pit results in instant death. Later on there’s also a collapsing spiked ceiling and locked door – so be fast and grab the key in the central statue, while ignoring the others.

You will die frequently. Thankfully there are well-placed checkpoints in each stage, which are extremely handy, but you only have three lives. Use them all and it’s back to the stage’s beginning. There are infinite continues though and the ability to save between each level, so the game doesn’t become too frustrating. The boss for this third stage is some kind of harpy monster. 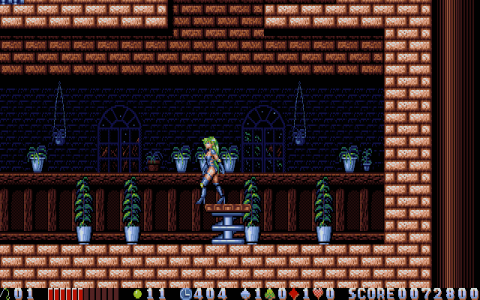 Stage four is a haunted church affair, with a really cool structural puzzle. Actually it’s not even a puzzle, but it’s still awesome in a kind of meta way: there’s a key in a blocked off area atop some boxes. You need to whip through the adjacent wall and destroy the boxes because – hey – that’s how video games work, not taking into account the physics of things. Destroying all the boxes then drops the heart onto a conveyor belt, sending it outside through a tiny window. Oh no, the key is lost! Well, not really, because head down a floor and you’ll find it’s returned to you via another conveyor belt from outside. There’s also a series moving platforms later on when ascending the stained glass chapel. The boss is a masked joker type character.

The fifth stage is an underground cavern filled with chains to climb and lava pits to avoid. There’s a great structural puzzle where you reach an impassable lava pit so take an alternate route upwards. This eventually leads to a bridge which suddenly gives way – it doesn’t happen very fast so most people will jump off. Continuing on leads to a mini-boss fight and dead-end, and the trick is heading back and falling down the hole, whereupon you land on the previous bridge which is now floating on the lava. This stage also contains one of the cheapest death areas in the entire game. You eventually reach a section with falling boulders and you’re supposed to stay in the gap between them, but on a slanted surface Rusty can’t run very fast so you inevitably lose health. Worse still this area ends with a slow elevator ride and rocks falling from the sky, which are impossible to avoid no matter where you move to. If you haven’t got a few lives spare it’s Game Over. The game even acknowledges its own bullshit since the next area, a mine cart ride with Gradius-style lava arches, has about six or more extra lives you can collect. This makes the boss, a giant spider demon with boobs (which also looks like one of the recurring bosses from Gradius), fairly easy. Did we mention nearly every boss is a naked woman? 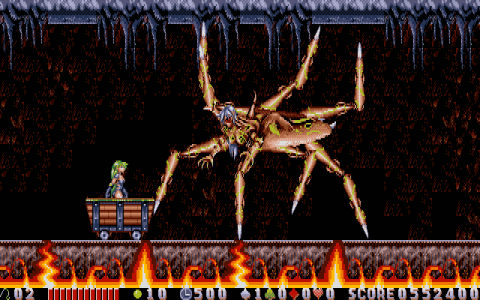 Stage six is a labyrinthine water temple ending with a Naga-style boss. The word Naga is from the Sanskrit meaning serpent, and is a creature part human, part cobra. Stage seven is the most linear of all levels, since it’s just a straight horizontal run to the end. It’s still pretty cool though since the sunset background is colorful and has some parallax scrolling. The boss is the easiest in the game, and is a woman emerging from a tree. Hit her flower to defeat her.

Stage eight is unashamedly a rip-off of Castlevania’s clock tower stages. In fact preceding this level is a map screen taken directly from every Castlevania game ever made. This is also where the game gets a little frustrating, since it has forced scrolling. This wouldn’t be so bad, except that you still need to collect keys to progress and it’s all too easy to miss one and then suddenly find yourself at a locked door with the screen rising up, leading to a lost life. (Duck and whip as much as possible, because you absolutely need to find every hidden key throughout this stage.) Apart from this questionable design mechanic, this area looks great and culminates with a moonlit walk along the ramparts for a battle against a giant skeleton. OK, that boss isn’t so original, but most of the others are. 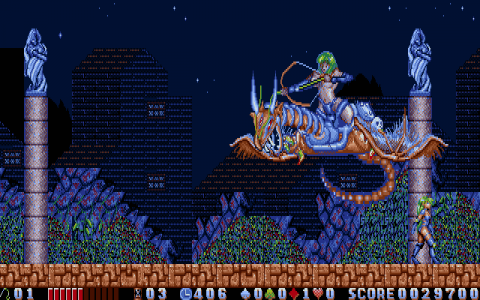 Stage nine is a tricky dash through the castle, with plenty of ropes to climb and hang from. There’s an elevator ride past some captives in cells, and then it’s another showdown with the clown freak and some cut-scenes. There is a stage ten, but it’s basically just three boss fights in a row. Beat the first woman and you’re treated to a familiar staircase climb and throned boss, before he transforms into Super Demon form. By this point they’re not even pretending not to be a Castlevania clone. To defeat the boss jump on his hands as they rise up and then jump and whip the green crystal on his forehead. Unlike other enemies he doesn’t flash when hit, so you need to listen for the whistling sound. Beat him and enjoy the ending screens.

It’s worth taking a moment to also reflect on the music, which is exceptionally good – and consistently so. Every level has its own unique theme, and throughout they are all fantastic. Hard rocking guitars are mixed with techno and classical music, with each note and chord pumping you up for whatever comes next. Good thing too, considering how difficult some sections are. Konami receives a lot of deserved praise for its always excellent soundtracks, but C-Lab did a pretty fantastic job not only in ripping of the Castlevania template, but ripping off the awesomeness of Konami’s music when creating their own. It would be an exaggeration to say it’s better than the best Castlevania has ever brought us, but it’s certainly worthy to stand alongside. The end credits the music to Masahiro Kajihara, Kenichi Arakawa, and Ryu Takami. 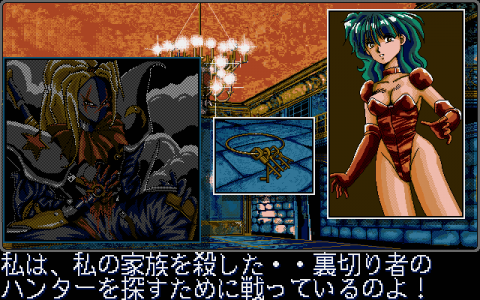 Some might criticize the lack of originality in Rusty, since it’s unashamedly a rip-off. But this would be unfair. Do you like Castlevania? Because if you do it’s absolutely worth playing. It’s not some badly made cash-in, rather it’s a legitimately good homage created to appeal to computer geeks who perhaps didn’t have a console. The production values are really high. It also manages to distinguish itself by having really cleverly structured stages. Obviously it’s let down by keyboard controls and some cheap deaths in places, but it’s still really cool.