After stumbling a bit with Galaxy Fight, their previous fighting games, Sunsoft got its act together with Waku Waku 7. It was hard to tell whether Galaxy Fight was playing it straight or whether it was just really silly but Waku Waku 7 is pretty clearly a send up of any number of anime and video game cliches. Considering how ripe these genres are for parody, it’s surprisingly that entries like Waku Waku 7 are so rare.

Rai is your typical hot blooded Japanese high school student that loves to yell really loudly. His name basically means “lightning,” so he attacks with electricity.

Arina is undoubtedly the spiritual successor to Roomi from Galaxy Fight. It’s hard to tell if she’d be classified as furry, but she definitely has interesting ears. She also has a peppy vocal song in her stage, and is always cheered along by her friends.

Don’t let his absurd name fool you – Dandy J is as manly as a man can be. He’s an Indiana Jones ripoff who attacks with a whip, and is cheered on by both his cat and his girlfriend, who will jump from the background to attack his foes.

Mauru is a huge purple monster thingy that seems to be a parody of the titular creature from the Ghibli film My Neighbor Totoro. It’s controlled by a young girl named Mugi, who seems to enjoy riding it.

This thing is a huge police mech piloted by two midgets, one of which has a mustache, the other of which appears to be a dog.

The generically named Slash is a combination of every generic sword wielding pretty boy found in practically every generic video game/anime out there. Since he seems to be a vampire, it’s pretty natural that he broods a lot.

Robot maids are another persitant character archetype in shounen romance stories, who knows why. Tesse actually predates Multi from To Heart and Mahoro from Mahoromatic.

Fernandez is a gigantic shrieking bat thing with a terrifyingly silly grin and a sadistic laugh. Before you fight him, you’re enlarged to several times your size, and fight him Godzilla-style. Called “Fernandeath” in some versions.

Yes! Bonus-kun returns and takes on the same role as Galaxy Fight, serving as the only true link between the games. He falls from the sky like a meteor and slams into the ground, making for quite an entrance. 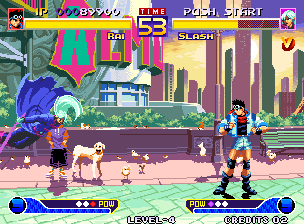 All seven of the main characters are out to beat each other up and claim all of the Waku Waku balls which (in absolutely no relation to Dragon Ball), will grant them a wish. The fighting engine is pretty similar to Galaxy Fight, although it’s been greatly refitted with a number of enhancements. The control scheme has been changed to the typical “two punches, two kicks” mechanic seen in many later Neo Geo fighters, and while the scaling camera remains, the infinite playing fields are gone. Characters longer merely dash forward, but instead break out into a full sprint. Certain attacks will send the other player flying towards the other side of the screen, although they can either recover from these attacks or bounce back for a retaliatory strike.

Similar to some 3D fighters, you can attack opponents when they’re done, although they can quick recover by mashing buttons, or attack when they’re getting back on their feet. The result is extremely fast paced fighting action, with characters running and bouncing and flailing all over the screen. Sometimes it’s a bit too much, as the game periodically slows down, but it’s nothing remotely game breaking. The AI is still aggravating (especially against Politank-Z and Fernandez), but it’s not nearly as painful as Galaxy Fight. 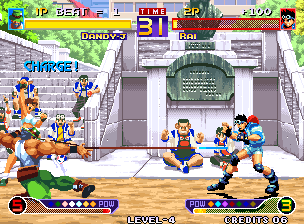 Also included are a number of super attacks. ES Attacks are variants of the normal special attacks, executed by pressing both punch or kick buttons simultaneously. By pressing all four buttons simultaneously, you’ll temporarily double your character’s strength and speed. Regular super moves are called “Dokidoki Attacks”, but there’s an even more powerful variation called “Harahara Attacks”, which deal even more damage. However, these require a few seconds to charge up – the screen will blink and sirens will sound whenever a character begins to use one. Since Harahara Attacks are unblockable, this serves as a fair warning to the opposing player to get the hell out of the way. Each of these super attacks are powered by the Waku Waku balls held by each character – so as you go through the game and obtain more balls, you can store up a great number of stocks. By the end of the game, you can hold seven power bars.

The graphics are colorful and cartoony, and nail the ridiculous atmosphere perfectly. The music, too, is much improved over Galaxy Fight – Rai’s theme is a generic yet bombastic anime hero theme song, Dandy J’s theme features a snazzy acoustic guitar and harmonica, and Arina has a full vocal song. All of this comes together with the fast and fun brawling action to create one of the Neo Geo’s best non-SNK fighting game. 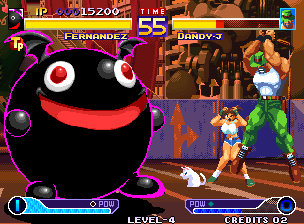 Waku Waku 7 was ported to the Saturn, and naturally, remained in Japan. Despite requiring the 1 MB RAM cartridge, it’s a pretty crappy port. Although the characters look nearly perfect, the backgrounds look extremely pixellated, as if their resolution were cut in half. The load times before fighting are fine, but it pauses after every round for a second or two to change from day to night. These issues are tolerable, but there’s an almost unforgivable about of slowdown, especially with characters like Dandy J, who is not only huge, but has two characters in the background that follow him constantly. Most of the entire battle against Fernandez is fought in slow motion, which is completely unacceptable. The Saturn version does feature some extra artwork, which changes depending on the internal clock of the system, as well as an arranged soundtrack, but this doesn’t excuse the sloppy port. 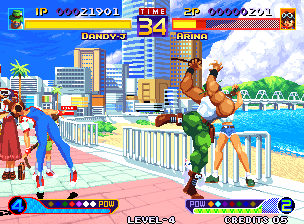 The PlayStation 2 version found on the Sunsoft Collection is fairly close to a perfect port – there’s still some minor (two to three second) loads between matches, but it plays just fine, and has both original and arrange soundtracks. The Wii Virtual Console and Nintendo Switch Arcade Archives are basically perfect ports of the arcade version though. 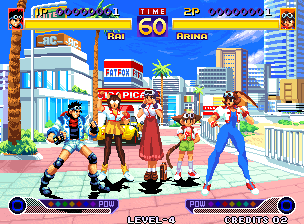 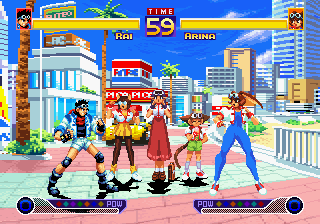 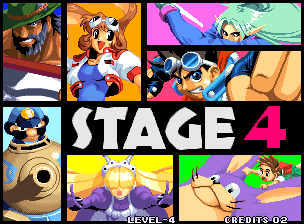 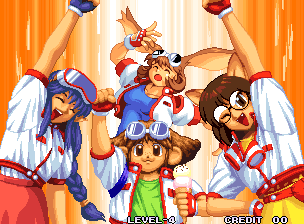 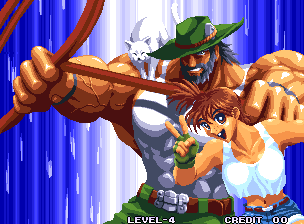 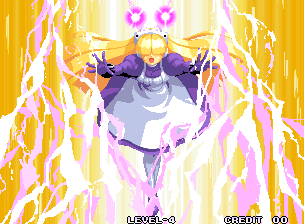 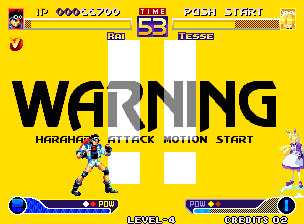 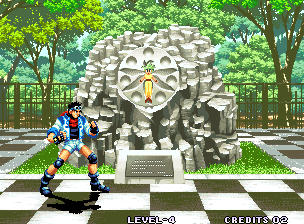