Wachenröder is a strategy RPG that was released in the late years of the Sega Saturn, and probably the last of its kind. It met with poor sales – in part due to the system’s declining popularity – and was soon to be forgotten by the public in spite of its initial critical acclaim, which made an already unlikely localization impossible. It’s very upsetting that such a game would tank, because the guys behind it were kind of a dream team. It brought several major figures together including Yasuyuki Ueda and Yoshitoshi Abe (of Serial Experiments Lain fame), art deco-anime artist Range Murata (popular for his work on Last Exile), established composers Satoshi Miyashita (Wings of Thunder) and Takayuki Negishi (Tengai Maykou IV) as well as the founding member of the legendary progressive rock band King Crimson, Ian McDonald, as surprising and unlikely as it may sound. 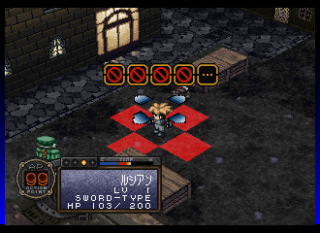 The game is set on the foggy and highly socially stratified Edward Island, and follows the misadventures of Lucian Taylor. His younger sister is bed-stricken due to a pollution-related sickness that has made her extremely light-sensitive, and his irrational guilt about this state of affairs – “Why am I the healthy one?” – pushes him to devote himself to her well-being. However, her eventual death forces him on a quest of vengeance around the desolated lands to find Sword Emperor Duran, who he holds responsible for being the manager of hazardous water treatment facilities. The plot doesn’t wander into epic battles and maintain a touching and introspective tone, supported by superb hand-drawn artworks, as well as an overall oppressive feeling through unusual cutscenes featuring scale models by a trio of experimented modelists – Takayuki Takeya, Fujita Yasuo and especially Kito Eisaku, who also designed the Nerve Tower of Sting’s first person dungeon RPG Baroque which was released around the same time as Wachenröder in 1998. 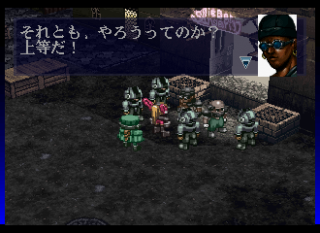 The high quality of the artistry unfortunately contrasts with the in-game 3D graphics used during special attacks, which, like many Saturn games, look fairly dated. Actually, the gameplay parts actually are the game’s low point. While it’s not substantially broken, it’s just plainly unremarkable and feels more like an excuse for the story to unfold. It’s a typical tactical RPG, with the addition of two mechanics: An AP system consisting of 99 points allocated each turn used to move around, attack  or using skills and items. The other distinctive mechanic is the heating gauge. Characters uses what the game calls Sledges – a contraction of the term Steam Refined Gear – weapons that uses heavy hydrogen in order to enhance the weapon’s capabilities. The drawback is that they can overheat fairly rapidly if used at full power and must be managed lest your sledge will be unusable until your next turn. Combined with the lack of magic spells, it is a neat touch that makes the gameplay consistent with the game’s setting. 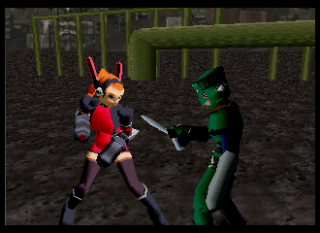 Besides, the game is really linear, with a typical map-cutscene-battle structure with little emphasis on customization. Stat growth is predetermined, equipment upgrades are permanent and offers little versatility, The game also has a few camera issues which can impede the map visibility in narrow areas. But Wachenröder greatest flaw probably remains its difficulty – or rather lack thereof – which make the whole adventure feel like a walk in the park even for newcomers to the genre. In a nutshell, it’s a tactic-less tactical RPG, which may leave hardcore fans of the genre very unimpressed. Which is the shame since the game’s level design is actually pretty decent and does not fall into the all too common pitfall of only asking the player to eliminating every enemies on sight and offers a variety of objectives from rescuing hostages to escaping from a map as well as vanquishing a particular enemy before a set amount of turns, Furthermore, the interface is very user-friendly – using Shining Force-style icons in combat – which make the gameplay very accessible even for non-Japanese players and a much needed break from cautious reading of the game’s translated script. 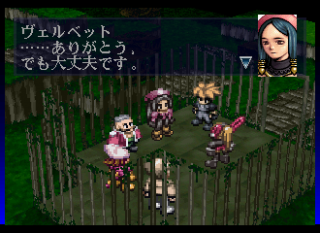 What does leave a major impression the player is the game’s atmosphere which feels like a thick, heavy, even poisonous fog. The art direction was strongly influenced by German avant-garde arts and industrial design of the late 19th and early 20th centuries, blending it with anachronistic steampunk aesthetics and naturalist literary thematics. Everything in this game, from character design to architecture and light balance contribute to a sophisticated feeling of crushing gloom. It has also its fair share of real-life references. It’s no coincidence the area in which the game takes place is called Edward Island, obviously referencing the world-famous expressionist painter Edward Munch, whose personal life is pretty much mirrored in that of the protagonist’s. A BGM track is even named after Walter Benjamin’s iconic essay The Work of Art in the Age of Mechanical Reproductibility, and the cover art itself features the logo of the Wiener Werkstätte art nouveau-influenced artists collective. The game is also littered with rock music references such as the Gentle Giant Tower, a self-defense group  leader named Franky Zappa or the imperial city, where the game’s climax takes place, being called King Crimson. In hindsight, it’s not that surprising that Ian McDonald was called in to work on the soundtrack. 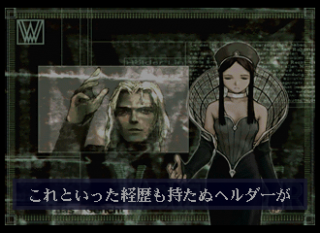 The soundtrack is unambiguously awesome as well. A perfect fit for the game’s ambiance, it naturally shows progressive qualities due to McDonald’s input. It mainly consists of haunting melodic rock track, with a subtle touch of jazz. Seriously, the song “Avalanche” is probably one of the best staff roll theme you’ll ever hear in a video game, ever. 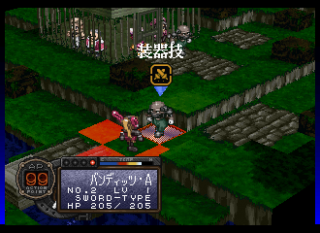 In the end, Wachenröder is pretty tame as a strategy, but a real masterpiece when it comes to art direction and storytelling. It certainly won’t be remembered for its mechanics, but games that go so far to produce a unique atmosphere are very rare, and quite respectable. It’s really worth a try, and it’s a shame the game was almost instantly buried along with the Saturn’s dying body back when it was originally released.