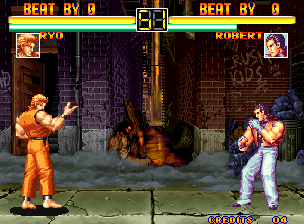 Back in 1992, Street Fighter II was the new kid on the block, and other arcade developers were scrambling for ways to attract the public away from Capcom’s fighting machine. After Mortal Kombat was released that year to obscene popularity at American arcades, developers realized that to compete with Street Fighter II, you had to offer people something different. SNK’s Art of Fighting, well… didn’t exactly reinvent the wheel. But hey, “if it ain’t broke, don’t fix it”. Instead, SNK opted to make Art of Fighting stand out by giving it visuals that far surpass those of Street Fighter IIand several innovative advanced techniques, a few of which would become standardized in the genre shortly thereafter. Couple these innovations and great visuals with SNK caliber mechanics, and you have a series that actually stands up where most SFII clones are forgettable.

Regardless of any gameplay changes from game to game, Art of Fighting maintains certain consistencies in its graphics throughout the series. For starters, the character sprites are absolutely huge, much larger than any other fighting game. In order to keep everything in frame, the screen zooms out when characters back away from each other to make more of the playing field accessible, and zooms in when they are close. This effect that would later show up in several other SNK fighters like Samurai Shodown and Kizuna Encounter. Art of Fighting‘s amazing graphics should come as no surprise, as the men in charge of the series were Hiroshi Matsumoto (AoF 1&2) and Takashi Nishiyama (AoF 3), who together ran the design teams behind King of Fighters, the later Fatal Fury games, and the original Street Fighter. 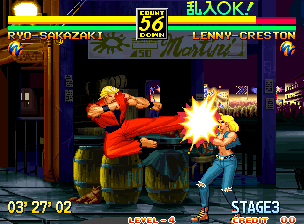 Art of Fighting takes its fair share of crap from fighter fans for its “mediocre” character designs. They really aren’t bad at all, but most of them are not up to the normally high quality standards for SNK fighting game characters. Several of them are fairly generic, but at least a few of them are pretty cool. The second game has pretty much the same cast as the first, with only a few original characters, but the cast is almost completely different for the third. The series stars the Sakazaki’s and their family friend Robert Garcia, who each practice a fictional martial art style called Kyokugenryu Karate.

Art of Fighting takes place within the same continuity as plenty of other SNK games, with the first two games in the series even being set in Fatal Fury‘s Southtown. From a chronological standpoint, it’s a prequel to the events in the original Fatal Fury, taking place more than ten years earlier. The three games are set at periods from the tail end of the 1970s to the beginning of the 1980s, and Fatal Fury’s Geese Howard infamously makes an appearance in Art of Fighting 2 as a non-playable secret boss character. This continuity is somewhat ruined by the King of Fighters series, where Ryo and Robert appear to be the same age as Terry and Andy Bogard.

Like many Neo Geo games, all three Art of Fighting games were compiled into a single collection for the PlayStation 2. The Japanese version, released in 2006, contained online play over a matchmaking network. In 2007, it received a budget release in America, although the online option was removed. All three games are practically arcade perfect (barring the resolution differences that only the most discerning of arcade fanatics care about), and include both the original and arrange soundtracks. This is undoubtedly the most convenient way to play these games.

The first champion of the King of Fighters tournament, and the main character of Art of Fighting. Orphaned at the age of ten when his father disappeared, he has lived with his sister Yuri ever since. After being abandoned, he was also taken care of by his friend/rival Robert Garcia. He seems to share some kind of romantic tension with King. One of the most frequently recurring SNK characters, Ryo would later become a regular in King of Fighters and appear in several other SNK games such as Fatal Fury Special. In later games, like the 3D wrestler Buriki-One, he takes on the persona of Mr. Karate.

Robert is like Ken to Ryo’s Ryu. The sole heir to his family’s multi-billion dollar fortune, Robert was sent by his father, and Takuma’s best friend, to learn Kyokugenyru Karate at an early age. This is where he met and befriended the Sakazaki family. After Takuma disappeared, he took care of Ryo and the two have shared a friendship/rivalry ever since. By the time that the games take place, he has developed a romantic interest in Yuri, which Ryo and Takuma disapprove of. Robert has since become a regular in King of Fighters.

Father to Kasumi from AoF 3 and the creator of Todo style karate, Ryuhaku has a long standing rivalry with Takuma and considers his Kyokugenryu school to be a financial threat to his own. After he is defeated by Ryo, he goes into hiding, and has since then made eight separate cameos in other SNK fighters. He’s the only character that wasn’t brought back for Art of Fighting 2, but surprisingly shows up in Capcom vs SNK 2.

A member of Mr. Big’s crime family, who looks like a generic biker character. Leads a Southtown based group of thugs called Neo Black Cats. As his ending from Art of Fighting 2reveals, his goal for Neo Black Cats is to turn it into a dance group.

A kung-fu master, expert in Chinese medicine, and current director of Southtown’s prison. Formerly a foe of Takuma’s, the two have long since been friends. He is a “sennin”, a Chinese word for someone who obtains immortality via alchemy. It is revealed in his ending for Art of Fighting 2 that he would become famous for finding the cure for hemorrhoids. He’s a blatant Vega clone with similar claws, but a bit more stylish.

As a young girl, King grew up in Thailand and dressed as a man to enter kickboxing tournaments. This issue of gender conflict continued when she moved back to America to work at Mr. Big’s restaurant. In the first game, her gender is initially stated to be male, but if she’s defeated in the proper manner, her shirt tears open and her true identity is revealed. She also employs two female twins named Sally and Elizabeth as waitresses. King has since become a regular in King of Fighters, and the twins can be seen in several backgrounds in that series.

A boxer whose career was destroyed when he accidentally killed an opponent in the ring. He has dreadlocks in the first game and a shorter style in the second. He works for Mr. Big in AoF, but is attempting to get his boxing career going again in the second game. He eventually gets an opportunity to do so, fighting the title bout in his ending.

A martial arts instructor for the military who looks like an amalgamation of Jean Claude Van Damme and Arnold Schwarzenegger. Goes by the nickname “Killing Machine”, but prefers to be called “Hell Bent For Leather” in America (uhh…listen to more Judas Priest if you don’t get it). During his AoF 2 ending, the military attempts to recruit him to rescue the president’s pet canary Tweeter (I couldn’t make this up if I tried). He refuses, saying “Hasta la vista!”, which probably backs up the theory that he’s partially based on Arnold.

Video games’ original pimp. After Takuma left his crime family, he kidnapped Yuri, which provokes the events of the first Art of Fighting. Later, he showed up in as a member of the Boss Team in King of Fighters ’96. He can’t jump or crouch in the original game, and has a super move that only the CPU can perform.

Creator of Kyokugenryu Karate, and both father and sensei to Ryo and Yuri. Mr. Karate wears a wicked looking Tengu mask in the original game, and fights maskless in the second. He also has a huge “X” shaped scar on his chest. He would later become a regular in King of Fighters and make appearances in a few other SNK games, most memorably appearing as part of the awesome Old Man team in KoF ’98. Takuma is most likely based on the famous martial artist Masutatsu Oyama, the founder of Kyokushin-kai (Kyokugen, Takuma’s style, is obviously a play on it)

Ryo’s sister, and Mr. Karate’s daughter. A practitioner of her family’s Kyokugenryu Karate, she joins the King of Fighters tournament to show Ryo how well she can fight. Yuri is SNK’s Capcom style character, having a moveset very much like Ken and Ryu (and many, many, many other Capcom characters). She has been in almost every King of Fightersgame ever made, SNK Gals Fighters, and a few other SNK games. However, in the Art of Fighting series, she’s only playable in the second game, despite appearing in all three.

A ninja who is out to kick the crap out of Ryo and his family. He is a descendant of Zantetsu from Last Blade and wields the Nagare and Kage twin ninja daggers like his ancestor. While he only appears in the second Art of Fighting, he’s also playable in King of Fighters ’95 and XI. Like Todo, he makes cameos in the backgrounds of several other King of Fighters games.

A Mongolian wrestler and general nice guy. He works as a dock worker at the Southtown port to raise money for a school in Mongolia that he hopes to open. Exclusive to Art of Fighting 2.

Geese Howard is the main antagonist of Fatal Fury, but he makes an appearance in Art of Fighting 2 as a secret boss character. He is much younger in this appearance, sporting long hair, different clothing and a different moveset than his older version in Fatal Fury. Young Geese is also the boss of King of Fighters Neowave. 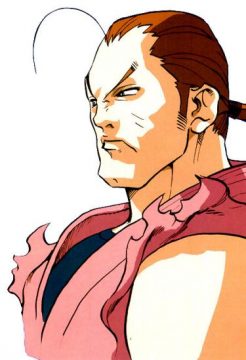 When Street Fighter Alpha was released, its most notable original fighter was a hidden character named Dan Hibiki. He’s a joke character – intentionally made bottom-tier – and a parody of SNK’s Art of Fighting series. His design is more or less Ryo’s body with Robert’s head. His fighting style, Saikyo-ryuu, consists of deliberately nerfed versions of the move sets of those two characters’ Kyokugenryu Karate style. He also possesses a completely worthless super taunt, where he’ll scream and brag and boast loudly, turning him into a sitting duck. He appeared in the rest of the Street Fighter Alpha series and a few of the Vs. games, with his ending in Marvel Super Heroes Vs. Street Fighter recreating the ending of the original Art of Fighting. His win quote in Street Fighter Alpha 3 is “I hate the art of fighting, but I want to be the king of fighters!”