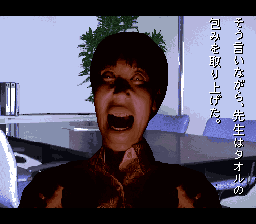 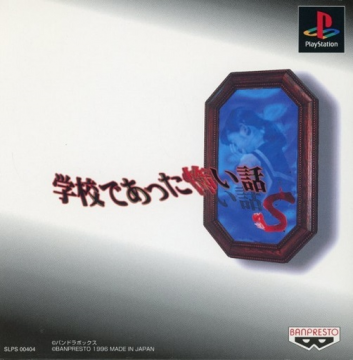 Take one look at Gakkou de atta Kowai Hanashi (“Gakkowa” by its fans) and you might find it patently absurd. You wouldn’t be wrong; its digitized actors look goofy and unflattering, but there’s more beneath this campy surface. 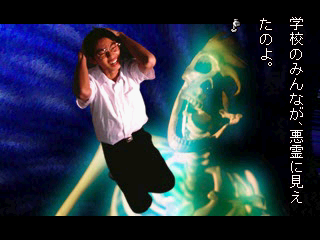 One of many challengers to ChunSoft’s Kamaitachi no Yoru, Gakkowa is unusual in that the protagonist takes the passive role of listener. Set at the tail end of a sickly humid spring, freshman Sakagami Shuichi has joined his school’s newspaper club. As the spooky old annex building—a hotbed of urban legends—is scheduled to be demolished over summer break, club president Hino has tasked Shuichi with covering the spine-tingling Seven School Mysteries for the next issue and arranges a meeting between the underclassman and seven storytellers. It’s something of a modern homage to Hyakumonogatari Kaidankai, with a distinct flair for urban legends of the 1970s-80s.

We’re introduced to six storytellers (the seventh is initially AWOL), each of whom relays a unique tale depending on the order they’re selected: Makoto the jock; gloomy Shoji; class clown Nozomu; Tomoharu, unfortunately nicknamed “Toilet” due to his infatuation with them; femme fatale Akemi, and sweet-natured Reiko. There’s 50 chapters in total, of which only seven can be seen per playthrough. Each story is highly divergent; the player is asked what they think will happen next, and depending on one’s choices the storyteller may change tack and tell a completely different story. It’s as broad as it is labyrinthine. 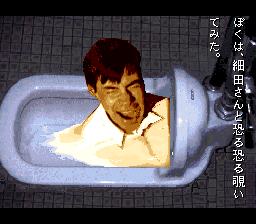 The stories run the gamut of ghost sightings, urban legends, cautionary parables, and a few gag episodes. The game doesn’t shy away from heavy topics including teenage suicide and predatory teachers, and things can turn pretty ghastly—the lovestruck schoolgirl who rips out her tendons to demonstrate the “Red String of Fate” comes to mind—but as Gakkowa generally tells rather than shows, an understanding of Japanese is required to get the most out of it. It’s possible for Shuichi himself to experience an untimely demise: spend enough time with the cast and you start to get the distinct impression they’re messing with him, their once campy photographs taking on an uncanny life of their own. This school isn’t just haunted; it’s the most haunted: Shuichi can fall prey to evil spirits, living dolls, curses, and grotesque monsters. And that’s not to mention mundane threats, like the cannibals and serial killers who count themselves among the faculty…and the students. 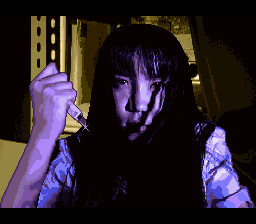 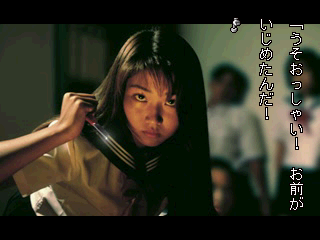 A year after its release, Gakkowa received an enhanced PlayStation port, Gakkou de Atta Kowai Hanashi S, which added revised art, music, additional stories, and the choice to play a female protagonist, Kurata Emi—to whom the cast does react differently. While essentially a definitive version, it’s arguable that the enhanced presentation detracts from the haunting atmosphere. The game received a handful of spiritual successors, including the troubled Shijuu Hachi, but it’s obvious that creator Iijima Takiya treasures Gakkowa as a passion project: as of 2021, Iijima’s doujin circle Nanakorobi Hachikorogari have released 11 indie Gakkowa titles.