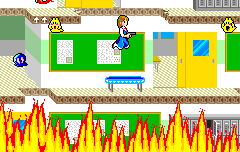 Video games can be surreal at times. That’s part of the fun, really. Usually it takes a moment to step back and realize how out-there the game can be, or it can be right in your face about it. Regardless, it’ll hit you that the premises of some titles just make you go “Huh?” after you’ve fired it up. Momoko 120% is, for all intents and purposes, an arcadey runnin’-and-gunnin’ platformer. It’s the twist that makes it an oddball. 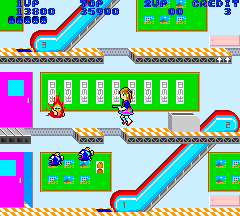 Momoko 120% has the player controlling the titular girl as she must escape burning buildings. The reason that the buildings she’s in is on fire is never fully explained. It’s conjecture that it’s due to the strange alien blob-like enemies that impede her path that caused it. Either way, it doesn’t explain where she got her phaser pistol that blasts her foes away with. Momoko must traverse up flights of escalators, ladders, trampolines, and floating platforms to reach the roof of the building and grab hold of a small blimp that floats by before she’s engulfed in the rising flames. In keeping with Donkey Kong arcade mechanics, any contact with enemies, their projectiles, or falling too far spells doom for our little heroine. 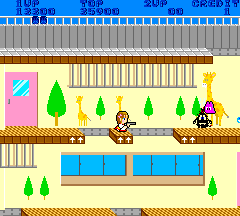 Part of the game’s gimmick and loose plot line is that every stage represents a part of Momoko’s young life. The five main stages have her at age 4, 6, 12, 15, and 18 running through looping building stories of a building to find her way up to the next, adding more floors to climb with each new stage. Many floors have pits to leap across or monkey bars to shimmy on. Open doors (or at least ones wide enough) serve as means of teleportation as Momoko steps into a room and appears elsewhere on the floor, usually popping in from the wall. Each stage adds more and more alien blob monsters to blast away as they fly, walk, or drip from the ceiling. At the end of each stage after fleeing on the blimp, the game shows Momoko’s sprite flashing as she grows up to her new age with a new outfit to boot. 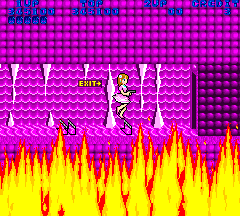 Now, this is made stranger by the settings of the stages. The first 4 levels take place in schools from pre-school to high school, with the 5th stage being a studio with Momoko as a idol singer. That is a lot of arson centered around one unlucky schoolgirl growing up, stuck with the misfortune of having 5 building burn under her and shooting alien creatures to bits from such a young age. That, and without any mention of where the aliens come from, who pilots the escape blimp, or why a preschool would be 5 stories tall with tons of escalators. It’s just bizarre playing as a 4 year old mowing colorful blobbies away as she tries to prevent her fiery doom. Even stranger are the bonus rooms hidden behind certain doorways, leading Momoko into hallways like a pink fleshy bio realm with hurdles to jump or a starry background with barrels to leap over Mario style– both with rising flames to contend with.

Should Momoko survive 5 levels of flames and aliens, the game ends with a quick final level with her 20 years old in a chapel in a wedding dress leaping to collect various items and trinkets for bonus points within 30 seconds before running to a door to marry a groom unseen beforehand, where hearts float above them and ends with a newborn baby and loops to the first stage again. Either it repeats Momoko’s exploits, or it begins with her daughter with a similar journey of hell. Your call. 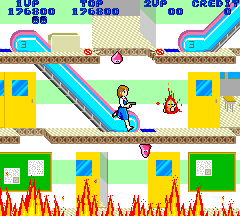 Now, outside of the goofy setting and theme, Momoko 120% is more or less standard arcade flair in the Donkey Kong vein. The graphics are very colorful and bright but mostly flat with big black outlines over Momoko and enemy sprites. Background doors and hallways copy and paste the same 5 or 6 designs over and over for each level, giving the appearance of a cartoon background looping over and over as you run by. Momoko has a slow, jerky 2-frame run cycle as she glides over the ground. Her gun fires fast and clears the blob monsters usually with one shot, but they begin appearing in droves by the 3rd level, making it easy to die as you share the same one-hit weakness. Momoko is invincible as she enters doors or rides on escalators, but is vulnerable on ladders, bouncing on trampolines, and climbing monkey bars, so make sure to clear out all oncoming enemies and hope they don’t spawn before you clear your path safely. The gun itself can be boosted from collecting a powerup from one green monster with antennae that spawns mini baddies with each shot and takes multiple hits, or from clearing the bonus rooms. Unfortunately, the power progression switches from wide shots to more pea shooter shots back to wider shots and again until it ends with one mega beam, and one death sends you back down to regular pea shooter level. There is no means of continuing after you lose all your lives, which makes it tough if you run into a badly placed alien swarm or fall off from a bad jump late in the game. Sadly, the bad jumps can happen by glitching through a moving platform or leaping before falling down a floor even if it’s to land on a trampoline (as an aside, any fall to Momoko’s death has her flashing an upskirt). Ladders are made worse as you have to tap up over and over in order to climb them, making them as bad of death traps as the monkey bars.

Jaleco developed Momoko 120% as a licensed title based on Rumiko Takahashi’s Urusei Yatsura series. The deal didn’t go through for the arcade version, but an FM synth recreation of the anime’s 1st theme song “Lum’s Love Song” plays through the majority of the game. They were able to obtain the rights for the Famicom port the same year though, rechristening the game under the title Urusei Yatsura: Lum no Wedding Bell.

A quick note on the series the Famicom port is licensed from, Urusei Yatsura (a title that is a layered pun that can best be translated as “Those Obnoxious Aliens From the Planet Uru Are Invading”) is a late 70s/early 80s long-running comedy that centers around an unlucky lech Ataru Moroboshi who accidentally becomes betrothed to an oni-like beautiful alien girl named Lum, with multiple characters and hijinks ensuing into the mix. Not as well suited for an action game like Takahashi’s later works like Ranma ½ or Inu Yasha, but a classic manga and anime for its time.

The gameplay is pretty much the same as the arcade original, though the story’s changed. The plot tells about an earthquake hitting the hometown the manga and anime takes place, causing a rip in the space-time continuum, hurdling Lum into the past where she must run through burning buildings to safety. This doesn’t exactly mesh with the original work with Lum running through the same school and studio levels through different times before she came to earth, nor her age regression, but it’s better to think of this as it really is: a port of Momoko 120%. The enemies Lum can zap with her lightning powers are shifted to match the series more proper with octopi, tengu crow demons, hired bodyguards from the rich Mendou, falling Kotatsu-Nekos, and more. Aside from a blimp, Lum hops onto a UFO from the rooftops. With no gun to power up, Lum can collect secret items that appear from jumping in the right place to allow her to take more damage or calling in helpers such her little cousin Ten or her former fiancée Rei to deal with baddies. The bonus rooms are changed to a one screen “Kill All Enemies” type for points. It’s a shame that the Famicom port is a big step down from the arcade version, and not just in graphics and sound. Icons have to be collected to get moving platforms to move in the first place, and Lum has no control with her jumps once she leaves the ground. The game can also slow down and flicker once the screen is flooded with enemies. At least there are a few nice touches, such as having a perfect rendition of Lum’s flying sound effect when she hops from a trampoline and having Ataru’s signature bow-legged walk in the wedding scene, complete with a comical falling down from Lum’s hearts. Lum no Wedding Bell isn’t a stellar title, yet was the only action-oriented game in the Urusei Yatsura line of video games.

After the turn of the century, a series of mobile phone games starring the Momoko were released and redesigned under the “Momoko 1200%” moniker. The first couple were two halves of an updated version of the original arcade game. The next phone release was Momoko 1200% in Machigai Sagashi (“Spot the Difference”) where you must find the discrepancies within the picture in a time limit and shoot them away. The final mobile game is a simple bowling affair Momoko no Kasei Bowling ~La Mars Cup~ (“Kasei” meaning “Mars”) with Momoko herself competing with her classmate Taka-chan and the goofy-looking Mars Prince with a pink octopus on his head. Of all the titles starring Momoko, only The Game Paradise made it outside Japan. 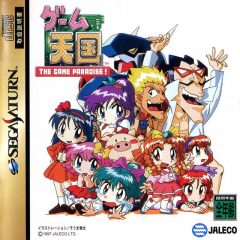 Though it doesn’t seem as if Momoko as a character wouldn’t have legs to venture into new games, she did appear as a playable character in the tongue-in-cheek parody cross-over shooter Game Tengoku / The Game Paradise alongside characters from Exerion, Plus Alpha, Buta-san, and Formation Z. Her artstyle and design was reworked to what is considered cute and moe for the mid-90s in Japan. While her part is generally as thrown in as the rest of the Jaleco crew, her bomb attacks flash the screen with high quality images of her wearing fetishy cosplay outfits like a maid and bunny girl and gym outfits. The Sega Saturn port adds more flashing bomb outfits as well as artwork of her made exclusively for the new intro. The home port also marks the first time that Momoko is fully voiced within the cutscenes. The PlayStation sequel excludes Momoko for what is described as her little sister, whom hopefully hasn’t been plagued with multiple alien invasions and massive fires.