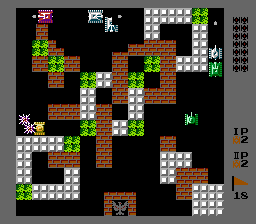 From the late ‘70s to the early ‘80s, commonly dubbed the golden age of arcade gaming, Namco found its footing by publishing Space Invaders-inspired shooters, Galaxian (1979) and its sequel Galaga (1981), to critical acclaim. Between these two titles, it also released Tank Battalion that mixes up the formula; instead of being stuck at the bottom of screen, you’re free to move around and dish out your bullets multi-directionally on the battlefield, essentially taking nascent form of arena run-and-gun (though it still uses one joystick and a button, as opposed to the twin-stick setup found in games like Robotron: 2084). The name might not ring a bell, but many of the NES owners will be familiar with its revised port on that system, Battle City, which is much better known than its arcade forebear – and for good reason. 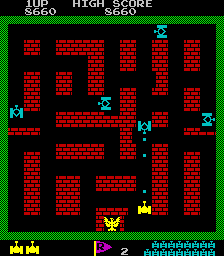 You assume a non-descriptive yellow tank, pitted against a battalion of blue tanks that attack en masse. Each round requires defeating the twenty of them, but they always spawn in spread formation from above, and the screen quickly becomes busy with all the enemies treading through maze-shaped level, making it hard to track them down. The walls can be torn down with your unlimited supply of gun, so with a bit of effort you can reform them to your advantage and get into position where you can cover all sidetracks. Another useful tactic is that, much like Space Invaders, you can parry projectiles by firing your own at them, giving the player a safe ground provided you don’t play too recklessly.

The enemy AI alternates between taking a random detour and making advance on you, but eventually they’ll go after your base at the bottom, represented as an eagle icon, that you must defend at all costs. If it turns to scrap heap, you’re done for, game over, no matter how many lives you saved up. As such, it’s sometimes a good idea to take a bullet and sacrifice yourself, which resets the round and possibly averts certain disaster.

Although Tank Battalion debuted in the same year with Pac-Man and X-Rally, it runs on older hardware than either of those, looking primitive even by 1980 standard. The only sound is ambient booming explosion, which is bound to be drown out in middle of beeps and boops from the other arcade cabinets. Both you and enemies can only move half a tile at a time, further hampered by a noticeable delay between your input and your tank reacting to it. This proves to be an issue in stages where there’re no blockages to impede your foes’ course, as you can barely keep up with them because of jerky controls. 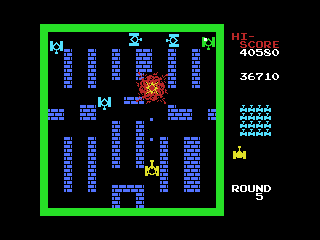 Before the NES conversion arrived, Namco published ports for a couple of Japanese computer models. The Sord M5 version shrinks everything down in favor of designing bigger levels, to the point it takes a lot more time for enemies to get anywhere near your base, so it’s at least easier, if not exciting. The MSX version has faithful visuals and smoother controls, plus it adds a new flashing-colored tank that can upgrade your arsenal upon defeat. This is also the first version to feature a short, iconic “stage start” jingle that would be re-used in Battle City and onward. According to an interview with former Namco president Shigeichi Ishimura, the poor sales on these platforms ultimately made them turn to Nintendo’s soon-to-be-famous Family Computer console.

In 1984, Namco signed a contract with Nintendo to become its first third-party developer, distributing its Famicom games in Japan under Namcot brand. The initial batch consisted of straight arcade-to-home ports like Mappy and Xevious, but it later extended to console original titles like Star Luster and Valkyrie no Bouken. Battle City, released in 1985, falls somewhere in-between. It looks and plays like Tank Battalion, so it should be a port, but it soups up almost every facet of the game that it may as well be considered a sequel. Battle City didn’t officially leave Japan at the time, but this version has worldwide reputation because it showed up on millions and millions of bootleg multicarts. 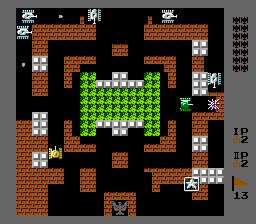 The most prominent improvement is that while your position is still restricted to half-a-tile grid, everything moves and runs in rock solid 60FPS, putting it leaps and bounds beyond any iteration of Tank Battalion. The diversified enemy roster from the MSX version is further expanded on, introducing four types of tanks that differ in terms of maneuverability and durability. There is still a flashing-colored variant that not only nets a better weapon (which can be upgraded multiple times), but offers other helpful aids like temporary invincibility, extra lives, a smart bomb that instantly removes all enemy tanks, and a repairment of the barricade around your base. These power-ups are randomly deployed on stage and disappear after a few seconds, adding more layers of strategy to collect them while trying to stay alive.

The game hasn’t much improved from Tank Battalion in visual department, and retains the minimalist sound design, mostly comprise of noise from vehicular slugfest. The level design is a lot less repetitive as more terrains were added into the mix, like unpassable water, slippery ice floor, and indestructible grey bricks. Some of these have a side effect of obstructing the view of bullets traversing through them, but it’s neat for variety’s sake. Continuing the company’s tradition of paying homage to its older games, a few stage layouts are based on classic Namco characters. Death doesn’t reset the game any more, and the compact stage size means it’s actually harder than the original arcade game once all paths are clear, but with all the refinements under its belt, it helps raising the stakes without being interfered by poor controls. Last but not least, Battle City adds a co-op multiplayer mode as well as “Construction Mode”, a full-fledged level editor. Both made for a great selling point back in the days, when taking alternative turns between players was more common and user-made levels were a rare sight. Altogether, Battle City is still a modest game with simplistic gameplay loop that can grow tiresome while plowing through all 35 stages, but it’s decent for an early NES title – released in the same week with the original Super Mario Bros. to boot – and even today it’s plenty of fun to pick up and play in short burst. 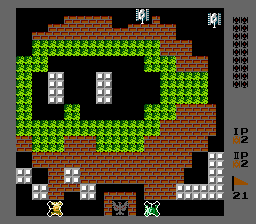 The level based on Pooka, a recurring enemy from Dig Dug.

Of particular note is that there’s a cryptic message built into the game (“This program was written by Open-Reach who loves Noriko.”), accessed via a series of complicated input from both controllers. “Open-Reach” is likely a pseudonym of the game’s programmer Ryoichi Ohkubo, whose full name is hidden inside the ROM (as with most of the video games of its era, Battle City doesn’t have a proper staff roll and the game simply cycles back to the beginning with higher difficulty upon completing all levels). Two more employees are also mentioned along with him, Takefumi Hyodo and Junko Ozawa, who would work on a variety of famous Namco titles for years to come. 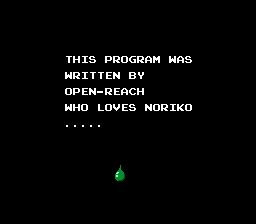 Battle City ended up getting its own arcade release for Nintendo Vs. System, re-titled Vs. Battle City. The original NES game let you start from any level upon booting up, but here it always puts you into Stage 1, and there’re no continues. Other than that and the lack of Construction Mode, it’s identical to the console version, but since Battle City greatly increased the scoring opportunity in many areas, this release is superior to the original Tank Battalion and worth a look if you want to play it in arcade format.

Although the NES version is the most famous out of all, there were more home ports based off Battle City, each with its own compromise to fit the targeting platform. In 1986, Dempa ported the game to assorted Japanese home computers, namely Sharp X1, MZ-1500, and FM-7. They suffer from choppy controls akin to Tank Battalion, but are otherwise faithful ports that keep all the contents from Battle City.

That small box underneath is all you get to have a grasp of what happens offscreen.

There are two separate releases on the Game Boy: a 1991 standalone version programmed by Nova, and the one included in the 1996 compilation Namco Gallery Vol. 1. Naturally, both lose the 2-player co-op mode and the level editor. Nova’s version adds 15 more levels, but since it does not scale down the assets for smaller screen estate, you can only see a portion of the field. The frustration is partially negated by a radar that shows enemies’ position, but it sure is annoying when you try to scavenge a power-up spawned somewhere in level, or an unseen bullet flying toward your base can spell an instant end to your game. Thankfully, there’re cheats that can unlock the level select and adjust the difficulty to your liking. Also exclusive to this port is the “VS Mode” that utilizes the Game Link Cable accessory to play against a human player.

The Namco Gallery version features its own 15 extra levels, different from Nova’s, and has slightly less detailed graphics, though the native Super Game Boy support makes up for it. It features both the “Normal Mode” that takes similarly zoomed-in perspective, and the “Fix Mode” that fits the whole map into single screen using tiny sprites. It also contains a handy password save system. A mobile port for Japanese cellphones came out in 2003; little is known about it other than that it adds a minimap like the Game Boy releases. 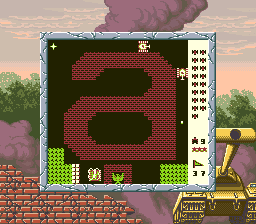 There’re five levels in this version that take each alphabet from the company’s name.

All of the digital re-releases opt to use the NES version. This includes the Virtual Console release for Wii (2007), Nintendo 3DS (2013) and Wii U (2014), Namcot Collection (2020) for Nintendo Switch, and Namco Museum Archives Vol. 2 (2020) for PlayStation 4, Xbox One, Nintendo Switch and Windows. It also appears on Star Fox Assault for GameCube (whose production was outsourced to Namco) as an unlockable minigame, albeit only in the Japanese version. 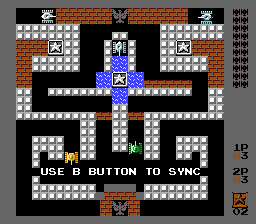 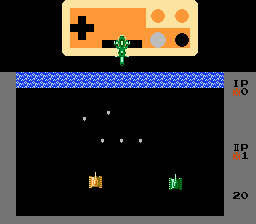 Battle City hosts an extensive ROM hacking scene, owing to its simplicity that makes it relatively easy to create a mod of it. These hacks usually arrange the stage layouts like in the original’s Construction Mode, but others go further as adding new power-ups, new enemies, and so forth. Some of the most interesting ones include Binary City (2009), which takes a cue from Hudson’s Binary Land and forces you to control two tanks at once that mirror each other’s behavior, and Battle City: Zeng Ge Hack (2012), which throws in all kinds of hilarious gameplay roulette, including the battle against a humongous vehicle shaped like Famicom controller. 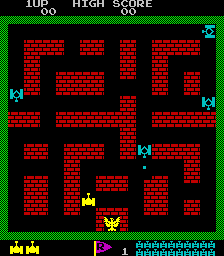 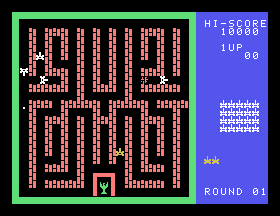 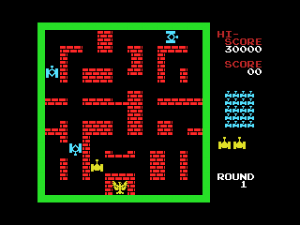 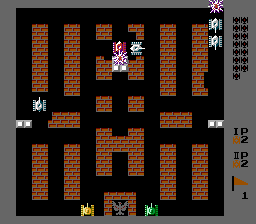 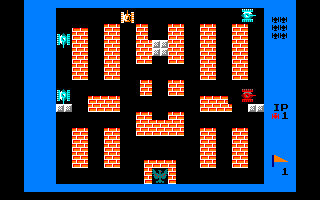 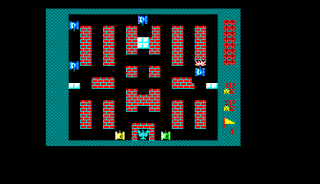 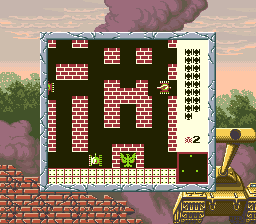 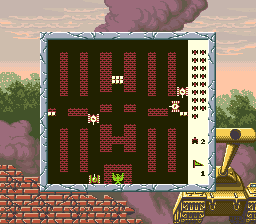