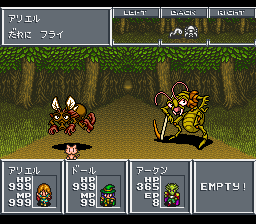 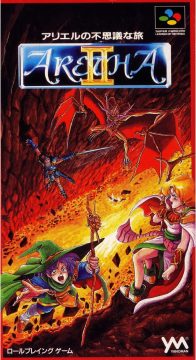 Released in December of 1994, Aretha II: The Super Famicom takes place after the end of the war with the Vantar Empire. Ariel is now queen of the Aretha Kingdom, and her friends have went their separate ways. One day she receives a mysterious letter from Doll, claiming that he is in trouble. After reading it, she makes a resolution to go on a journey to help, thus meeting a large cast of characters—both new and old.

Ariel’s second adventure plays out similar to her first, but everything seems a bit more polished. The graphics seem a little sharper in the overworld and character design, and there are more animations that had not existed previously, giving the world a livelier and more colorful feel. Fans of the Lunar series may feel at home here, since the graphics of the town, overworld, dungeon designs, and pixelated characters show striking resemblance. Given that Japan Art Media developed some of the Lunar games, it was no surprise that the game felt like an offshoot of the series at times.

The music score has some much needed improvement. The previous game had a rather bland soundtrack. This time around, the composer churned out quite a few defining melodies, though nothing that will go down in memory. Still, Aretha II sounds better than the previous games, and the songs fit each setting and scenario well enough. 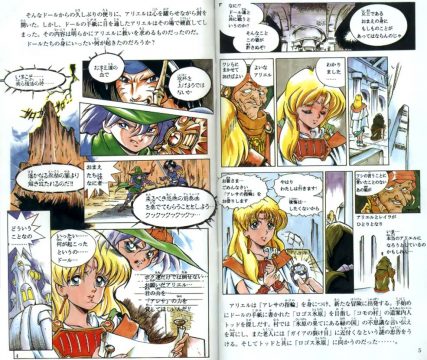 The gameplay has a slight improvement over its predecessor. The combat hustles along at a faster pace, as does the plot. Therefore, Aretha II  runs much shorter than Aretha the Super Famicom—an average clear time goes between 12 to 15 hours, which is very much shorter than the 60 to 70 hours needed to clear the previous game. However, this is not such a bad thing, since the developers simply removed a lot of the bulk that slowed the pacing down. No random encounters on the world map attributes to some of this; in fact, you simply run into a monster in a dungeon to initiate combat (similar to Lunar on the PlayStation). The fights prove easy for most of the game, but the challenge picks up towards the end.

As a result of being a shorter game, the story suffers a bit. The protagonist, Ariel, has experienced a lot during her previous adventure, but this sequel does little to show any character development. In fact, the whole story unfolds more like a quick outing than a grand adventure with any sense of depth. The story is not bad at all, but players who invested time in Ariel’s first game will walk away wanting more than the mere appetizer that this one provides.

Out of all the turn-based games in the Aretha series, Aretha II: Ariel no Fushigi na Tabi is the most refined of the bunch if you can overlook the short story. Once again, a lack of Japanese knowledge will bar many from exploring Aretha’s vast kingdom, as this game very is very text heavy. Dynamic Designs claimed to have a halfway completed translation back in 2012, but has not released any updates thus far.