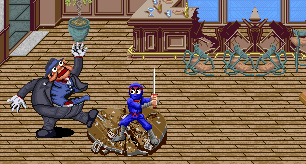 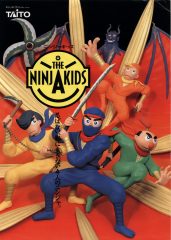 Ninjas have been a staple of pop culture for a large portion of the later 20th century, though it’s hard to say how they really caught on or why they became so far removed from their original purpose. The beat-em-up genre has seen surprisingly few ninja-centric entries outside of Konami’s Teenage Mutant Ninja Turtles, though there were a few examples throughout the 90s, such as ADK’s not-great Ninja Combat for the Neo Geo and Irem’s delightfully screwball Ninja Baseball Bat Man. Approximately as weird (if not weirder) than the latter example is The Ninja Kids by Taito, which can best be described as “TMNT if the Turtles were actually Muppets instead.”

Taito tried their hand at ninjas with The Ninja Warriors to mixed results, but The Ninja Kids is a far sillier and arguably better-playing experience. The plot sees a demented cult plotting to summon “The Satan”, and a karate sensei sending out his four ninja puppets to stop this looming threat. All four ninjas have different weapons like the Ninja Turtles and play quite differently from each other, in addition to having screen-filling magic that fits to one of the four classic elements. Hanzo (blue) uses a fast katana that generates waves for extra range and uses water magic. Sasuke (yellow) wields a kusarigama (chain and sickle) for both close and long-range assault alongside wind magic. Akane (red) prefers to keep his distance while pelting enemies with shuriken and fire magic. Finally, there’s Genta (green), who looks a bit like Bert, and is quite powerful with his sansetsukon (three-part staff) and earth magic. All four are very much worth playing, even if you’re likely to stick with a favorite; Akane is the best, since infinite projectiles in a genre where you normally need to get close to hurt enemies is quite gratifying.

Your five-stage mission to cut down servants of The Satan takes you through city streets, an apartment building, a construction site, a ninja-infested blimp, and The Satan’s base at a dark church within a spooky graveyard. You face quite an interesting cast of enemies, not all of which are culturally sensitive. For example, you face a lot of street punks carrying sticks and knives with various color schemes, some of which unfortunately combine bright red lips with dark skin. Also jarring are keffiyeh-clad terrorists who toss Molotov cocktails at you, and a rotund black elite guard whose lips are also uncomfortably ruby. Granted, The Ninja Kids was made in Japan, a traditionally homogeneous region with fewer reservations about depicting racial stereotypes. Still, it’s something to keep in mind.

Anyway, more enemies include magic cultists who ironically resemble Klansmen, and your natural horde of hunchbacked zombies, and the game just throws these mooks at you in substantial droves. However, your ninjas are powerful enough on their own that most enemies only take a couple of hits before violently exploding into various body parts, but this is bloodless since everyone else is also a puppet.

The game is basically Sesame Street brought to you by the letter “ouch”, with a lot of weirdness and bad Engrish about. If “The Satan” didn’t clue you in on Taito’s brand of linguistic marring, brief cutscenes show bad guys threatening you with “Wretch! Ninja Kids!” and “Here is a graveyard of you!”, the latter quote which sounds in line with Magician Lord‘s taunting villain Gal Agiese. It’s this extra bit of daftness, along with the unique marionette character designs, that makes The Ninja Kids stand out above your basic Final Fight rip-off, and while not their best work, Zuntata’s still as high-quality as ever with their punchy music.

As to how the game plays, it’s surprisingly fair compared to most other quarter-eating beat-em-ups. You mostly deal with large hordes of basic baddies that you tear through like tissue paper, without going overboard on large midboss types, though there are some musclemen with improbably shaped arms that pop up every now and again. They’re not particularly tricky to deal with, they just take a lot of punishment. However, ninja magic helps you clear the screen of weaker foes or deal serious damage to larger ones, where the more scrolls you collect, the more damaging spells become, akin to Golden Axe.

Alongside health-restoring sushi, you also find power-ups that turn you temporarily invincible, surround your ninja with an elemental shield, and best of all, turn you into a super-fast, concentrated element to mow down enemies like Sonic the Hedgehog. You’re rewarded with these pick ups for causing property damage, and you’re given a fair chunk of targets to wreck, so be destructive. Even if you have no items around, double-tapping any direction has your ninja perform an evasive tumble that damages enemies, helping you out of sticky situations when necessary.

Of course, five stages equal five bosses: a werewolf who can summon smaller wolves to rush the stage, a flame spirit that constantly spits out fireballs, a zombie piloting an Aliens-esque power loader, the leader of a rival ninja mob who generates clones and takes ages to kill, and none other than The Satan himself, who feels a slight bit anticlimactic for all his build-up after the evil ninja.   Still, these fights are quite fun and challenging without being too unfair, at least compared to the cheap bosses of most other beat-em-ups. A savvy player can beat The Ninja Kids in five credits or less, which can’t be said even for most of Capcom and Konami’s finest brawlers. It’s perhaps a bit shorter than other similar games, but it doesn’t overstay its welcome, and remains varied in its challenges up to the final act.    The Ninja Kids may seem a bit too goofy at first glance, but anyone sensible enough to not judge by appearance will find it’s one of the more creative and enjoyable products of Taito’s arcade tenure. It also kept from falling into complete obscurity thanks to its inclusion on the first Taito Legends anthology in North America, and Taito Memories II Joukan in Japan.