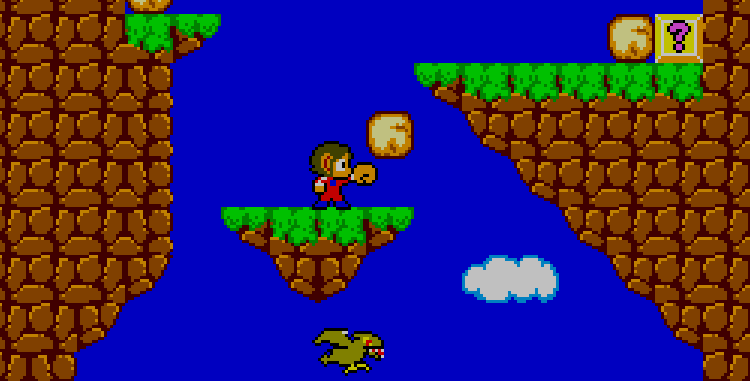 Sega was a rather pitiable entity when it came to the Master System. They had no market share, their advertising was almost non-existent, and everyone was busy neglecting homework to play Nintendo instead. However, those who stuck with the underdog console found solace in a few key franchises. One of these was Alex Kidd, the closest Sega came to having a Mario-style mascot until Sonic the Hedgehog showed up, years later. 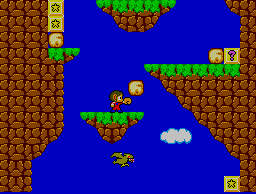 Sega credits Alex Kidd to an individual name Osahru (Ossale) Kohta, although that’s actually a pseudonym for Kotaro Hayashida, who also worked as a scenario writer for Phantasy Star and the Phantasy Star II Text Adventure games, as well as other Master System titles like Fushigi no Oshiro Pit-Pot, Woody Pop, Zillion, and Fantasy Zone.

Alex’s most prominent features are his large ears, red jumpsuit and gigantically enormous sideburns. He is, in some ways, designed to look sort of like a monkey. Although he looked appealingly cutesy in the original Japanese artwork, all of the Western boxes seemed to make him look like an obnoxious, fat, freckled third grader, which probably played a role in dooming him to obscurity. Though there are six Alex Kidd games, they’re almost all entirely different from each other – only Miracle World, the first Master System game, and Enchanted Castle, the first (and only) Genesis game, share similar designs and gameplay. 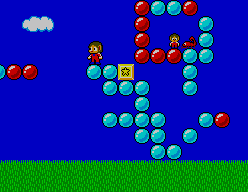 Alex Kidd is often compared to Mario, since he was the competitor’s only mascot at the time, but their games couldn’t be more different. While Nintendo’s game is a straight-up platformer that could feel right at home in the arcades, Alex Kidd in Miracle World is a much more ambitious game. Whereas Super Mario Bros. was simply about running from left to right, jumping over things and occasionally looking out for secret stuff, Miracle World feels like a much fuller adventure.

Alex’s first adventure takes place on the planet of Aries where, as the hero and the lost member of the Radaxian royal family, he has spent many years on the top of Mt. Eternal honing his block-breaking skills. He halts his studies to save his brother Egle, who has been captured by the evil king Janken. (Alex’s brother shares his name with the hero of Pit-Pot, one of Hayashida’s previous games, and is sometimes spelled Egul or Igul.) There’s actually quite a bit of backstory laid out with a number of secondary characters mentioned in the manual; they only appear briefly in the game, and are mostly members of the Radaxian royal family. There is a surprising amount of text compared to other games of the time, certainly much more than “Your Princess is in Another Castle“, at least. 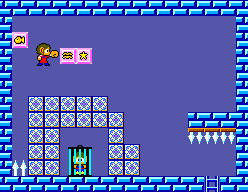 For starters, it breaks free from the repetitive four-level cycle of Super Mario Bros. to create a much more organic experience. Most levels scroll horizontally, as is typical, but a handful scroll vertically downwards, and the few castle stages actually flip-scroll in all four directions. Throughout the adventure you play through mountains, forests, oceans, towns and other varied locales. A map screen at the beginning of each stage and on the pause screen shows your progress through the game’s 17 levels.

Alex’s trademark power is the ability to break rocks with his enormous fists (dubbed the “Shellcore“ technique). There are many “star“ blocks spread within each stage, most of which contain bags of money. Cash is not directly for extra lives, but instead acts as currency to buy a variety of power-ups in shops found around each stage. Certain blocks marked with question marks also give specific items, one of the most important being a bracelet that lets you shoot power waves. This is extremely useful, because Alex’s punches are rather short ranged and leave him susceptible to danger. However, these same blocks can also spawn deadly magicians, who ruthlessly hunt Alex down unless he can outwit or outrun them. 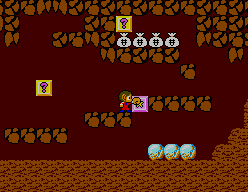 Several stages also allow you to purchase vehicles to make life a bit easier. These include a “sukopako“ motorcycle, which can plow straight through rock; a “pedicopter“, a small personal helicopter activated by pedaling; and a “suisui” speedboat. Unfortunately, these will explode if you either take a hit or run into an obstacle, forcing you to play the rest of the stage on foot. 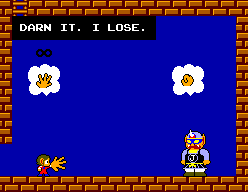 Major boss battles don’t occur normally like in other games. Instead, the big showdown sport of Miracle World is a match of rock-paper-scissors (known as janken in Japan). The ridiculous looking enemies actually have hands for heads – their names are Rock Head, Paper Head and Scissor Head, obviously. Win, and you proceed. Lose, and you die. Actually, even if the bad guys lose, they’re very sore about it and tend to attack anyway. When you first play, winning these battles is a matter of luck. However, if you manage to find a certain hidden item, you can read their minds. They still try to trick you, of course, and naturally if you don’t find this hidden item, you’re kinda screwed for the remainder of the game. There are set patterns for all of them, but they change unpredictably if you lose, which can drastically screw you up. 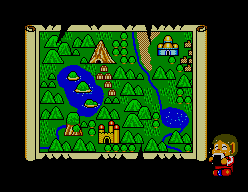 While it’s a remarkably constructed game, Alex Kidd in Miracle World is brutally difficult. Alex can only take a single hit before dying, but that’s the least of his worries. Some of the later levels are filled with particularly nasty platforming challenges, requiring intense precision to dash or swim through narrow corridors without bumping your head on a bed of spikes. The slippery controls don’t help matters either. Thankfully, as long as you have spare cash, you can continue through the use of a code. Plus, the left Button 1 on the controller jumps, and the right Button 2 attacks, making it the opposite of the later established norms. Still, the graphics are colorful and distinct, and the main theme is catchy (composed by 1980s Sega mainstay Tokuhiko Uwabo), even though it certainly could’ve used more songs throughout the rather long adventure. It has all the makings of a classic, though lacks the straightforward “pick up and play“ feel of Nintendo’s more famous games, making it harder to get into if the player has little patience for Alex Kidd’s quirks.

There are minimal differences between regional versions. At the end of each level is a rice ball, which Alex then eats as the map screen pops up. Also known as “onigiri“ in Japan, these are bits of rice clumped together and wrapped in seaweed, usually with some kind of fish or other filling. Later revisions of Miracle World, built into the Sega Master System II, actually have Alex eating a hamburger instead. This version also swaps the buttons to a normal configuration. On another note, the currency used in Miracle World is a U with two lines through it, called a Baum. The symbol for Japanese yen is a ¥, or a Y with two lines in it. This symbol also shows up the Master System game Zillion.

Despite the numerous Sega compilations and remakes, Alex Kidd has only been featured in a few of them. Outside of a handful of Virtual Console releases for the Wii, the only major package comes in the form of the Sega Vintage Collection, named Alex Kidd & Co. The only game in the collection starring Alex Kidd is the first one, Miracle World, as the other two games are Super Hang-On and Revenge of Shinobi. They’re all just ROM dumps, but the emulation, developed by M2, is excellent, and it includes versions from all territories.

In 2019, a Nintendo Switch ports was released as part of the Sega Ages line. This version adds in new cinema scenes that introduce each level, drawn using the SMS color palette; a FM synth version of the soundtrack (it was originally only PSG); an added song for the motorcycle that was composed but went unused; a quick continue function without needing to enter a cheat code; a few challenge modes; and the ability to rewind time a few seconds to re-do any mistakes. A complete remake called Alex Kidd in Miracle World DX was released in 2021. 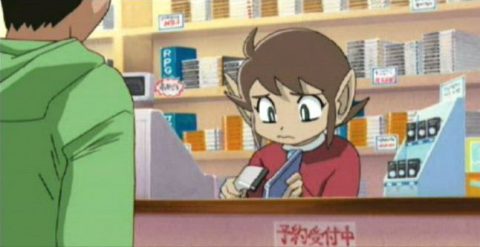 Segagaga is a brilliant Japanese Dreamcast game where you get to take control of Sega to help it win the video game war (naturally, this was before they bowed out of the console race back in 2001). At one point, you run into Alex Kidd.

When you meet him, he details the tragic story of his fall from grace – at first, he was strong competition for Nintendo and Mario (both names bleeped out), but was later forgotten in favor of Sonic the Hedgehog. Instead of starring in video games, he’s now forced to work retail. He gives the protagonist an inspirational speech about moving forward. He also laments that he’s 38 years old and still looks like a kid. A sad, but hilarious look at Alex Kidd.

Despite several sequels, Alex Kidd in Miracle World only got one proper follow-up, the Genesis game Alex Kidd in the Enchanted Castle. Unfortunately it was, in many ways, an inferior game, so over the years, fans have taken to creating their own titles, either in the form of native PC titles or ROM hacks. 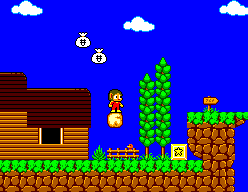 Alex Kidd 2: Curse in Miracle World, developed by Yeti Bomar, revises the sprites and completely remakes all of the levels, including a brand new map screen. 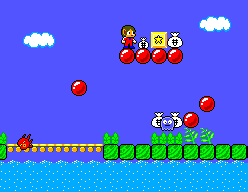 Even more ambitious is Alex Kidd in Miracle World 2, by Ian Wall, which sets itself as a true sequel, even starting the game in the same room as the original SMS game ended. Almost all of the enemies are new, the levels are completely remade, it has a completely original soundtrack, and there’s even a new vehicle, a jet plane. Both games are well worth playing for fans.