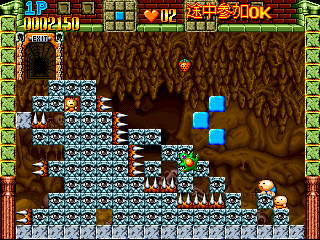 Co-op puzzle platformers are a rarity, especially something as loveably odd as Gussun Oyoyo. It’s another sad example of a forgotten series that never caught fire beyond the shores of Japan. Thanks to the generous licensing of Irem, there are three (and a half) takes on the same game done by completely different people. What’s more, the franchise burned itself out with nearly a half a dozen entries in just three years. These studios created such similar games literally within weeks of each other.  When this quick flurry of activity ended, Gussun Oyoyo would rarely be heard from again. The dust settled and all parties involved quietly went their separate ways. 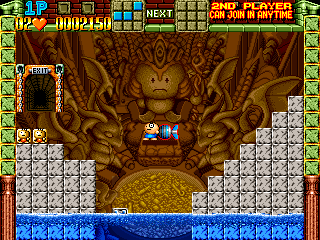 Here begins the story of Gussun and his buddy Oyoyo. They’re a couple of treasure hunters plumbing the depths of the local dungeon when an earthquake strikes. Water from the ocean is now pouring into the caves and they must climb out before it’s too late!

is the main character. Despite in-game claims to the contrary, he looks like a bald five-year old kid. He screams in terror at everything and will occasionally drown himself in water just to escape your Tetrismadness.

is Gussun’s similarly skull-capped buddy. He has a green shirt. This is the beginning and end of his individuality. I refuse to accept him as a mere palette swap, therefore I suggest that he is a buddhist and an excellent dancer.

is the local village girl. She pines for lost love as you try to survive this Hell the game so spitefully creates. She pops up quite a bit and gives you a hand with learning the controls. It’s clear from all of her cute outfits that she is the game’s Eye Candy.

rarely pops up. He’s described as a really nice guy by the game. His only real purpose is to fill your eyeballs with his gigantic pecs.

Every Gussun Oyoyo game plays in exactly the same manner. Instead of controlling your character directly, the game takes an odd Lemmings + Tetris approach. Gussun walks around like an idiot, content to dive off cliffs, suicide into enemies, and drown in water. Your job is to drop pieces to close the gaps and keep him out of harm’s way. Fortunately Gussun will try to co-operate and climb up blocks. If you’re real lucky, he’ll make it all the way to the exit.

While playing the game, you will discover some cool things you can do:

There are also some things that will consistently infuriate you into a madman’s froth:

To counter the punishing difficulty, there are a few useful power-ups that will help you relax. Invincibility, underwater breathing, time stopping, it’s all good. What’s not so good is they are usually placed in a tricky spot. I guess the game is hard no matter how you look at it.

If you have any volunteers, play this game with a friend. This turns a hectic and frustrating experience into… well, no I suppose having a friend doesn’t make the game easier. But at least it’s more fun! And only one of you has to make it to the end, which is nice.

This arcade game was the only one to get a release overseas. It came to us as Risky Challenge, with some new (read: inferior) music. Strangely, they didn’t bother changing the crazy Japanese voices. There is one odd difference: you can’t skip to harder levels in the English version. You always have to start over.

Overall, the first Gussun Oyoyo is a great start for a series continually marred by an insane difficulty curve. Fortunately, some later entries take pity on players and soften the blow.

Before Banpresto came onto the scene, Xing ported the arcade version to the PlayStation. This game is much sleeker than the original with better music and cleaner artwork. It’s the sort of improvement you would expect from moving to heavier hardware.

Instead of keeping the original levels, Xing went ahead and made their own. After getting through a few arcade stages, you’ll notice the game quickly changes. Soon you’re off in Xing land, surrounded by new challenges. If you thought the original was hard, this game has levels that are literally nigh impossible. Personally, I have nothing but hatred for the latter half of this game and I hardly recommend you subject yourself to its content.

Xing ported this title to the Sega Saturn on March 29th, 1996 as Gussun Oyoyo S. Some new levels made it a bit easier to swallow and they added some decent cutscenes. It’s definitely the superior version, although that isn’t saying much. Gussun Oyoyo S was re-released on the PlayStation in 2000 as part of the Mail Yasu series.

This isn’t a bad game. It’s nothing compared to Banpresto’s stellar take-over of the franchise. If you insist on picking this one up, I would suggest the updated ‘S’ version. Or you could be smart and keep reading for much better alternatives.