The Super Famicom has seen the release of a lot of unexpected games. The old limits of the Famicom were forgotten and a wide new world was opened. These new possibilities spawned quite a few ambitious projects, some handled by studios that hadn’t exactly made a name for themselves with previous games. Lenar was one; it’s true, this studio is far from legendary. Their first production, Bird Week, was a simplistic game on the Famicom. The company started out pretty bad, and it didn’t get any better, actually. Indeed, the localization in the US of their second game, Deadly Towers (Mashō in Japan), only earned them contempt from the American audience. The game is well known for its terrible difficulty and poor design (it was even reviewed by the AVGN). Yeah, Lenar failed as soon as it started. It seems the studio tried something more serious a few years later by developing two RPGs (Knight Quest for the Game Boy in 1991 and Magna Braban for the Super Famicom in 1994), but the majority of its work remains blatantly uninteresting… I’m not sure you want to play their bass fishing or motor-racing games to know more about them. But one day, after the release of their naturally generic GT Racing… It happened. 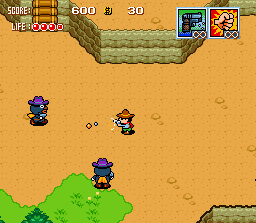 Gunple ~GUNMAN’S PROOF~ was published on the Super Famicom by ASCII in 1997, which is really late in the console’s life and probably the main reason why it was never localized. Irony of fate, the only genuinely interesting and original game Lenar has ever developed would also be its last. At least they had a brilliant finish. And this game would probably have been completely forgotten if not for Aeon Genesis‘s fan-translation. The game is an action-RPG not unlike The Legend of Zelda: A Link to the Past. The game is clearly patterned on the third Zelda game’s engine; it’s so obvious, they probably didn’t care about hiding it from the start. This doesn’t mean Gunple is a mere clone of the Nintendo classic, though – quite the contrary, actually, as it manages to make something original out of it. For one thing, it completely shifts the setting from medieval fantasy to the American Old West. 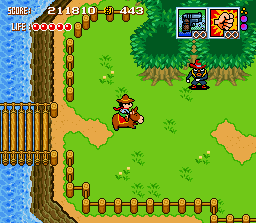 The game starts with a short intro, in which the background is set: In 1880, two meteorites crash in the American West – an event seemingly connected to the recent appearance of bizarre and hostile creatures in the surroundings. Once the little story is told, the title screen (whose wacky music and blinking colors are a bit unsettling) finally displays and, by starting a new game, the intro continues. Here we meet the hero, a young boy from Bronco Village in the South of Strange Island, not far from where the meteorites landed. While strolling outside the village, he happens upon a UFO that crashes before his eyes. Two entities pull out of the wreck and introduce themselves as Zero and Mono, space sheriffs on the hunt of a criminal called Demi they think has taken refuge on Earth. After the fright, the hero actually seems interested and even goes so far as to lend his body as a host to help Zero in his expedition! After a few “negotiations” with his dad, he sets out on his quest.

And the first thing we see is that, yes, it really looks a hell of a lot like A Link to the Past. Even the HUD is almost identical. However, the setting isn’t the only aspect to change; the game plays differently as well. Of course, there’s no sword here! You wield two weapons, your gun and your fists. The punch isn’t really that efficient, so you’ll mostly use the gun – which comes in handy, as said gun has infinite ammo! You can then snipe your enemies like crazy as much as you want. There are 8 shooting directions, so you can adapt to every situation and take down enemies wherever they come from. You can also strafe with the L and R triggers. Your character can move around, but he maintains his aim locked in a specific direction. It allows you to dodge enemy bullets and keep gunning everything down at the same time. It’s definitely a cornerstone of the gameplay! You can also crouch and crawl in order to avoid enemy bullets and edge your way out when you’re in a pinch.

Of course, your gear gets upgrades over the course of the game. There are two new guns and two pairs of gloves that will gift you with increased attack power. You’ll also get the chance to learn special techniques, like a charged shot. The game is completely devoid of secondary items, unlike Zelda, but it’s possible to unlock other weapons such as a machine gun or a bazooka that will then be dropped by mobs when they’re dealt with. Once picked up, it temporarily replaces your primary weapon and remains so as long as you still have ammo for it. And they’re really fun to use! You can also find bombs that will blast the entire screen. But mobs can drop other stuff to: they leave food behind (to regain life) and money (to buy key items and even more food). Carrots will appear as well once you have finished the first dungeon. These vegetables summon Mono the space sheriff, hosted in the body of a mule named Robaton. You can ride him a small amount of time and run amok all around. Speaking of dungeons, let’s talk about them. 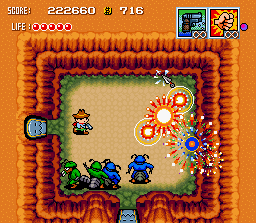 Yet another borrowing from The Legend of Zelda, though even if the dungeons look similar, it must be said that they are designed differently. There are only 6 of them, they’re way shorter, there’s actually next to no puzzle solving and the boss requires more shooting than thinking. The essential of dungeon crawling is actually made up of continuous gun battles! The thing is, their purpose isn’t “merely” to be finished. If you have taken a peek at the screenshots, you can see a score meter in the upper left! Yes, you can actually score in this Zelda-like! Of course, you get points from killing enemies and picking up items, but what makes up most of your final score is what you get at the end of dungeons. After defeating the boss, a large ammount of points is awarded to the player according to three factors: the energy left, the time the dungeon required to be completed and the treasures you have found within its walls. Not only are these dungeons meant to be completed, but also done so in the fastest way possible, while trying to find treasure chests and avoid damage! This remains pure scoring though, as the game doesn’t reward you for your score (apart from an extra life at the end of the toll). It’s a pity it actually doesn’t, as it could have been an incentive for more dungeon raiding. It remains an interesting concept nonetheless. In the continuity of the “arcade” twist of this action-RPG, you also have lives. If your lifebar is depleted, you’ll immediatly get up back up as long as you have extra lives in stock; if you don’t, you’ll just get sent back to Bronco Village. Although you may experience a few game overs at the start of the game, it soon gets easier as your gear gets better. Besides, the game is rather short (around 6 hours for a 100% playthrough), so the life system isn’t really much of an influence on the way it is played.

But let’s get back on what really makes this game stand apart from its model and contemporaries: its universe. Not only is the setting something new, but it’s also has a unique style. As you can see, the game’s characters are very cartoonish. The sprites are simple but their animations are great. For the record, they were actually designed by Isami Nakagawa, a mangaka known for his comical and absurdist stories (like Poguri). Humor is indeed a constitutive part of the game’s ambiance and it’s obvious it was an aspect the developers wanted to stand out, so that Gunplecould easily be differentiated from the 16-bit system’s other action-RPGs. The soundtrack isn’t left out either, as it serves the game’s universe remarkably well. Some tracks are actually really cool, like overworld themes Scenario 2 (cowboy folk with “galloping” percussions) and Scenario 3 (it almost gets house-like with this one). I have no idea who the composer may be though, as the game strangely lacked credits. Which is a shame, as the guys behind this gem at least deserved a bit of recognition. 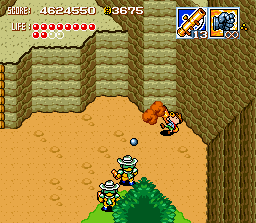 This action-RPG is actually way more action-oriented than its model, the legendary A Link to the Past. It may not be as complete as the Nintendo legend, but it’s also more original and more inventive. The gameplay is excellent and the universe is one of a kind, so you shouldn’t miss out on this one. Besides, there really is a bazooka!