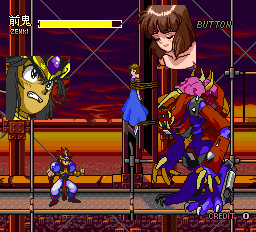 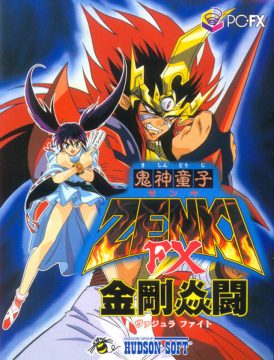 This is probably the most discussed game of the series: that fabled, super expensive, extremely rare, fantastic 2D side-scrolling beat-em-up, which maybe looks a bit like Guardian Heroes, and is exclusive to a system almost nobody owns. Most of these myths surrounding Vajura Fight are true – it is expensive and difficult to find, exclusive to NEC’s failed PC-FX system, and it does at passing glance resemble Treasure’s classic. Its status as a holy grail for hardcore collectors though, isn’t entirely warranted unfortunately.

In truth it’s more like a straight one-on-one fighter, with exposition dialogue before each fight. No rounds, just a single health bar for each enemy and a fight to the death. There are some scrolling stages with smaller zako enemies, but there are only seven such sections in the entire game and they are very short, perhaps less than a minute each. The combat takes place on a single plane, like Street Fighter, but is extremely limited. The PC-FX has six face buttons, but only three are used: one for blocking, one for jumping, and an attack button to be used in combination with the d-pad for different moves. The actual moveset for each of the two characters is also painfully limited. Blocking though is actually quite useful, with fights against the bigger bosses requiring a good rhythm and precise timing to avoid taking massive damage. 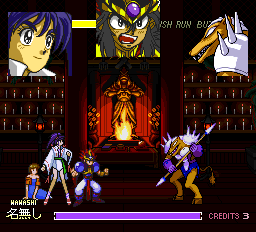 There’s a bit of variety in being able to choose between characters, with Chiaki being quite nimble but only able to fight using projectile attacks. Her moves list is the smallest, since she doesn’t attack physically, instead relying on fireballs. Zenki on the other hand controls like your typical brawler, with kicks, punches and rushing uppercuts. Occasionally a side-character from the anime will pop onto the screen to drop Chiaki’s bracelet. If Zenki can grab this item he’ll turn Super Saiyan with a major boost to attack, defence and health – in some instances it’s essential for defeating bosses. If Chiaki grabs her own bracelet, she summons Zenki who burns off an enormous portion of a boss’ health. Cheap players will want to stick with her since being able to attack from afar allows her to avoid taking damage, and summoning Zenki makes short work of enemies. Holding down the attack button with either character allows you to build up a charge that increases your attack strength.

The raw mechanics of the game aren’t particularly bad – this isn’t Rise of the Robots. But there just isn’t enough content to the game. The entire thing can be finished in under 40 minutes, and considering how easy it is on the default difficulty level, it’s likely that everyone will do so on their first go. If you’re not fluent in Japanese the voiced dialogues and little animated portraits before each fight are going to be meaningless. As a result the entire thing plays like a really long episode from any random anime series – which isn’t necessarily a bad thing, but it makes replays tedious, and for such an expensive game it’s unacceptable. The two player mode is a nice distraction, but not really enough to save it. Players take control of either Chiaki or Zenki, and team up for the duration of the game. 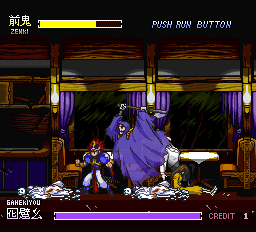 The story is also total nonsense: Chiaki gets a phone call from some girl who is getting harassed by a demon, so she and Zenki head out to save her, but in doing so the girl gets kidnapped while the heroes are warped to some other dimension. Cue lots of running battles while in pursuit, taking in planes, trains and anthropomorphic automobiles (no, I’m not making this up – you encounter said vehicles in this exact order). Just when you think you’ve rescued the girl she’s killed and dissolves in your arms, leaving you to take on the final bad guy. After this it goes really weird, and what seems to be Inugami from the anime appears with his pet wolf, Kokutei. They dispatch a surprise demon attack, and the credits roll… Language barrier aside, it makes about as much sense as an episode of Dragon Ball. Certainly not on the grandiose level of Guardian Heroes narrative.

As a game it’s woefully insubstantial, even in the context of the era it was released in, where games were shorter. And yet it seems flippant to dismiss Vajura Fight so easily, given the awe and respect it holds. In fairness it does look gorgeous – and I mean absolutely gorgeous, one of the most gorgeous low-resolution 2D games ever developed. The number of frames of animation for everything that happens is striking, and the size of some sprites is massive. It’s almost like watching an anime, except instead of animation cells having been drawn by hand, it uses chunky pixelated sprites for everything. The Sega Saturn has a lot of respect as a 2D powerhouse, but it’s clear the PC-FX was damn good in this regard too. The stage with a sunset city as the backdrop is truly staggering, especially when you’re desperately clambering up a collapsing building. The amount of effort the team put into the minutiae of the game’s visuals is astounding, and is probably why it’s so short in other respects. 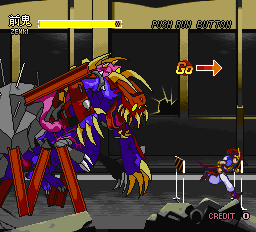 It’s easy to understand why collectors would place it on a pedestal, since in addition to rarity the production values are as high as you’ll find. It’s not worth buying the hardware for though. If it costs you little, Vajura Fight is absolutely worth the 40 minutes it takes to complete.