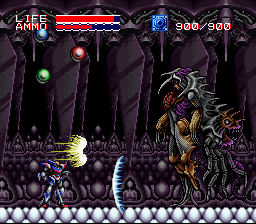 With the resurgence of interest in exploration-focused “Metroidvania” platformers, from original titles like Axiom Verge, Hollow Knight and Shantae to remakes of Wonder Boy: The Dragon’s Trap and Metroid II (twice!), it seems strange that 1992’s Xardion continues to languish in obscurity. A non-linear platformer with RPG elements, created with the input of mecha designers Hajime Katoki (Gundam, Policenauts, Virtua On) and Yasuhiro Moriki (Zeoryemer, Nadesico, Gravion), along with members of legendary studio Gainax, as well as an official US release with an English script by Wizardry co-creator Robert Woodhead, Xardion’s pedigree is outstanding. Why, then, is it not better remembered?

Set in the Alpha 1 star system, Xardion tells the story of three warring planets – Aquata, Zikar, and Feira – who are forced to put asides their differences when all three are invaded by mysterious biological horrors from the planet NGC-1611. The newly-formed alliance of Aquata, Zikar and Feira send a team of three robots, one from each planet, to defeat the invaders by searching Alpha 1 for Xardion, an ancient super-weapon whose power was sealed away thousands of years ago. Each playable robot levels up and gains weapon upgrades separately, with the player able to switch between them at any time from the pause menu. 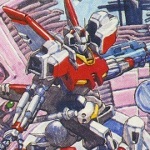 Known as “King of the Sea”, Triton was created by the inhabitants of the ocean planet Aquata. Despite his origins, however, Triton doesn’t handle water any differently to the other robots, and possesses no water-themed abilities. Instead, Triton is the team’s all-rounder, acquiring special weapons that focus on dealing heavy damage to bosses, and is the only character whose default gun can aim upward to hit flying targets. 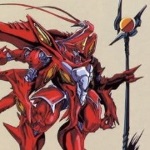 Referred to in the manual, though mercifully not in-game, as a “telekinetic Beastybot”, Alcedes hails from Feira, a technologically advanced desert planet. As befits a desert robot, Alcedes resembles a scarab beetle, with six limbs and two antennae. These antennae are Alcedes’ primary weapon, and attack by whipping back and forth, allowing Alcedes to hit enemies approaching from behind. Alcedes’ special weapons focus on crowd control, with a screen-clearing bomb attack and the ability to create a black hole that sucks in enemy bullets. 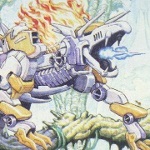 A quadruped robot from the jungle planet Zikar, Panthera’s most useful asset is his unique hitbox, which is twice as wide but only half as tall as the other characters. This allows him to function as the team’s equivalent of Metroid’s Morph Ball and explore narrow passages, as well as ignore a good deal of the enemies’ projectiles, which simply sail overhead and miss. 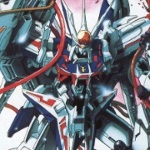 Foreshadowed throughout the game, Xardion joins the team in the game’s penultimate stage. However, in the name of padding, Xardion begins on level one, and its mandatory special weapon must be assembled from three components found by returning to earlier stages. After twenty minutes of backtracking and grinding, Xardion becomes what amounts to a stronger version of Triton, and is the only robot capable of harming the final boss. 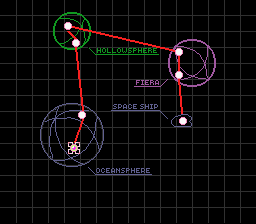 While Xardion’s map screen suggests a completely linear journey, most players will find themselves hopping back and forth between stages as the game progresses, with several stages containing branching paths and entirely optional areas. Each robot can acquire four unique upgrades which, Metroid style, are only found through exploration, making replaying stages necessary should any be missed. Collectible items also respawn upon revisiting a stage, allowing the player to stock up on health and ammunition refills prior to boss fights. Backtracking becomes mandatory once Xardion is recovered, with its strongest weapon – required to destroy a barrier prior to the final boss – only available after revisiting earlier stages on a quest to recover its components.

Given the non-linear structure, RPG elements, multiple characters, mecha theme, and the sheer amount of “name” talent behind the scenes, Xardion sounds like it has all the makings of a cult classic; a hidden gem in the SNES’s library that was unfairly overlooked at the time, awaiting rediscovery and reappraisal through emulation. The question of whether this is the new Metal Warriors is, unfortunately, answered within about five seconds of starting: No, absolutely not.

While a certain amount of weight and heft can make a character feel satisfying to control, especially if they’re a giant robot, Xardion’s characters handle as though they’re perpetually in waist-deep water, awkwardly shuffling forward without ever gaining momentum. Jumping feels similar, with the characters slowly rising upward at a consistent speed before suddenly crashing back down again. The SNES game the controls most resemble is the equally stiff and sluggish Musya, a game by… ah, the same developers. Were Xardion a pure platformer, the controls would make it borderline unplayable, but it’s mercifully set in a series of self-enclosed spaces where the most taxing acrobatics required is the occasional ascension of a vertical shaft. The exception to this is stage three, which has the characters navigate a series of small platforms above a bottomless pit while being shot by projectiles that cause knockback. Falling here simply places you back at the start of the level rather than killing you, but even given effectively infinite attempts, the section is a frustrating mess. What really makes Xardion feel like a chore, though, are the aspects that should have been its biggest strengths: The RPG elements and non-linear structure. Where Mega Man and Metroid, both clear antecedents, provided the player with a strong and capable avatar who then became stronger and more versatile as they progressed, the characters in Xardion begin with utterly pitiful defensive and offensive capabilities, and will likely be killed in a single hit by the first boss. As death only kicks you back to the map screen without any loss of experience points or inventory items, the solution is to simply kill everything on the way to the boss, die, start over, and repeat the process until you’ve gained enough levels to successfully spam Triton’s special weapon without dying. The slugging controls often force you to choose between dodging an attack or doing damage, which might have been fine had the bosses not been given utterly ludicrous amounts of health, meaning it’s easier to simply stock up on healing items and take hits while firing, rather than risk prolonging the fight by playing “properly”.

The unfortunate truth is that, without the mandatory grinding for experience and items required to make your characters put up something resembling a fight, Xardion would be over in about an hour, twenty minutes of which would be the platforming section in stage three. Despite the branching pathways and optional areas, the stages are extremely short and sparse, and bosses rarely do more than repeat the same two attacks over and over (about half don’t even move). The lowest point is, tragically, the acquisition of Xardion itself, in which the ultimate weapon capable of destroying civilization starts off on level one and requires you to revisit earlier stages in order to collect items which arbitrarily weren’t present the first time you visited. What should feel like a climactic moment ends up doing nothing but killing the pace and throwing your progress into reverse.

And this really, really isn’t fair, because there’s so much about Xardion that’s potentially great. The four planets in Alpha 1 look genuinely distinct from one another, and their respective robots do feel like natural extensions of their environments. The Gundam­-esque Triton is at home on the sleek, grey battleship that forms the centerpiece of Aquata, and Acledes scarab design and sun-tipped staff fits with the blazing deserts on Feira. Most impressive, though, is Zikar, a “Hollowsphere” with a frozen surface and a tropical jungle occupying the interior. Upon beating the boss, the characters ascend a pillar to the other side of the sphere, causing the screen to invert and leading to a brief section of upside-down platforming. The story also has moments that hint at how good Xardion had the potential to be. Dialogue between the characters is frequent, competently written, and doesn’t slow the game down – the only problem is that it’s never made clear which character is talking, making some exchanges hard to parse. The revelations about what’s really happening on NGC-1611 are surprisingly morbid for a 1992 SNES game, and the ending, which skips forward hundreds of years, ruminates on the meaning of history and then reveals that Xardion has transformed into a tree, feels like something from the next console generation. The greatest moment, though, and something that comes close to redeeming the entire experience, is the boss of stage six. Dropping from the top of the screen, “Hell Gunner” is an invincible mech that sprays the floor in front of it with bullets… causing the floor to collapse and Hell Gunner to fall off the screen. The characters then express annoyance that they never got to fight it properly, and move on to stage seven.

Despite being a chore to sit down and play, moments like this hint at the genuine ambition and effort that went into Xardion, and make the end product oddly compelling in spite of itself. While not popular by any stretch, the game has won its share of dedicated fans, including a fan-made rearranged soundtrack. The original soundtrack received an official CD release, complete with an art book, and a model kit of the titular Xardion was also produced. The Japanese commercial for Xardion featured a brief segment of the four robots in fully animated glory, making it closest thing to an official anime tie-in.