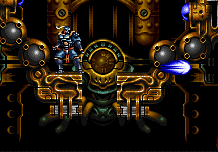 Hagane (pronounced the Japanese way – HA-GA-NAY – it means “steel”) is a SNES game that doesn’t feel like a SNES game. I guess that could come across as prejudiced, but the system suffered from a dearth of arcade action games that proliferated on the Genesis and Turbografx-16. It was developed by CAProduction, who later went on to work on a few other cult titles, like Ginga Fukei Sensetsu Sapphire for the PC Engine and Bulk Slash for the Saturn. Hagane, too, is something of a sleeper hit, even though it’s quite different from their other games. 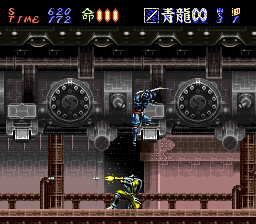 Hagane borrows a lot from Shinobi III for the Genesis. Like Sega’s classic, it mixes elements of traditional Japanese ninja and samurai with a near futuristic setting, filled with robots wielding magic and all kinds of craziness like that. Your main character – who looks to be robo-strutting through each stage – is a machination that, as far as I can tell, is powered by Japanese mysticism. When he dies, instead of fading away into a mess of blood like Richter Belmont from Dracula X, he tumbles backwards and explodes. Your recurring nemesis is a warrior that seems like a combination between Genjuro from Samurai Shodown and the Terminator. Somewhere in one of the levels is a floating sentry bot with a white fox mask on it. A lot of these designs elements are pretty cool, as the sprites are extremely well detailed and the bosses look amazing. But, with a few exceptions, the overall feel of Hagane is very muted and dark. It doesn’t help that the music is also forgettable at best and obnoxious at worst. 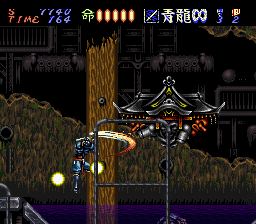 The gameplay also graciously pays tribute to Shinobi III, mixed with the swordplay of Capcom’s Strider and weaponry of Irem’s Ninja Spirit. You’re equipped with four different weapons that you can change at any time – a sword, shurikens, bombs, and a chain. You also have a screen clearing magical spell to help during the hairier moments. Most of the time, you’ll be charging through the stages, swinging your sword like Strider Hiryu, but occasionally you’ll need to switch to bombs and shurikens. These are both in limited quantities, but the enemies are pretty gracious in leaving them behind when killed, so you don’t need to use them sparingly. Your chain is unfortunately underutilized – you can swing it upward, technically making it more versatile than your other weapons. However, it’s too slow and weak to do much damage, and while it will let you grapple onto most ceilings, there are only a few occasions throughout the entire game where you’ll ever need to do this. 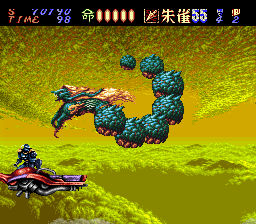 This points to one of Hagane‘s bigger problems – there are some cool mechanics to play with, but no real functional place to use them. You can use the L and R shoulder buttons to do cool somersaults in either direction, to execute a whole number of cool attacks, including charge attacks, flying jump kicks, and a cool maneuver where you punch the ground and make flames fly out. All of these look and feel really snazzy – but the problem is, you’re only invulnerable during certain parts of these moves, so it’s easy to get arbitrarily knocked out of them. Since you need to flip up to three times for certain moves, it’s almost to impossible to actually land these attacks with any accuracy. And once you’ve executed them, you’re left vulnerable again, ready to take a cheap hit. Despite all of these moves – which you can use as often as you want – they’re often risky and difficult to pull off efficiently. Additionally, you have a jump kick attack to quickly attack bad guys from above – but it only hits straight downward and not at an angle, so it’s difficult to use efficiently. In fact, most of the time you’ll end up doing a jump kick when you don’t mean to, and end up flinging yourself into danger. 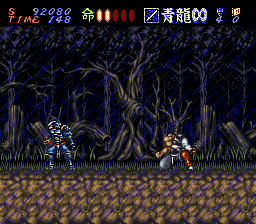 Frustratingly, some areas actually seemed designed to highlight the some of the more aggravating control functions. In order to execute the somersault jump in order to clear some of the longer jumps – your ninja’s standard jumping skills are otherwise pretty weak – you need to press jump and then hit jump again in mid-air. The problem is, you need to hit the second jump before the apex of your leap, otherwise the somersault won’t work. For many of the more irritating jumps, this can lead right to an ugly death. Ironically, this is the same problem that affected the 16-bit Shinobi games, although the controls feel even touchier here, especially since it’s way too easy to overshoot platforms when jumping. 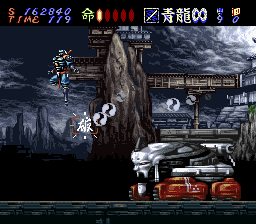 Even when it’s not tossing annoying platforming challenges at you, Hagane can be pretty difficult. Enemies pop up everywhere, and you absolutely need to be on your toes at all times. You walk quickly, and the screen scrolls even quicker, so it takes a little while to get used to the pacing. Even the measliest of foes take multiple hits to destroy, so even the morons that charge blindly forward can be deadly if you don’t swing your sword fast enough. The screen can get pretty busy too, because it tends to throw at lot out at once. Once you get used to its pacing, though, it becomes much easier to handle. Although the enemy placement is somewhat haphazard, and sometimes a bit unfair, it’s rarely unmanageable. The copious amount of health power-ups and screen-cleaning magic spells help to even out things too. It’s still a bit unforgiving though. By default, you can only take three hits, although you can expand your life bar to five with certain power-ups. However, this all disappears when you die. Most levels don’t even have checkpoints either, and running out of lives will force you to start at the beginning of the chapter. At least the stages themselves are pretty short. 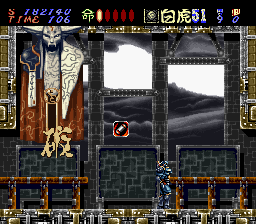 Despite some of haphazard level design, Hagane is just as inventive as its spiritual predecessors when it comes to cool setpieces. There are tons of boss fights – several mini-bosses, and a major one at the end of each level. In one stage, you hop on a hovercraft and maneuver through an exploding ship, which rotates around you in the only use of Mode 7 throughout the entire game. The area ends with a battle against a flying girl who transforms into some kind of wolf, who later grows a huge Medusa-like tail. Unfortunately, even some of these elements are frustrating. One of the final areas is an upward vertically scrolling arena, with spikes that follow you up as you ascend, Castlevania III-style. But they don’t crawl up slowly – no, they pounce upward, almost erratically, crushing your hapless ninja unless you get all of the jumps perfectly. 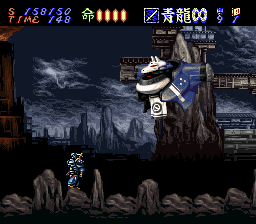 While it’s not up to the level of the ninja action classics, Hagane is still a pretty damn fun game. With some extra care, the enemy placement would be more cohesive, the level designs less aggravating, and the extra skills wouldn’t have seemed as useless. Still, as long as you’ve got a sense of patience for its idiosyncrasies, it’s definitely worthwhile as a forgotten SNES almost-treasure.

That reputation, combined with its last release and low sales, have turned Hagane into an extremely expensive title. There have even been rumors that the game was exclusive to rental stores, but given that there are many cartridges in the wild lacking the obnoxious rental stickers, it seems like it was released at retail, though perhaps not in large quantities.