What’s a Syvalion? Sounds like one of those cookie-cutter Japanese medieval fantasy RPGs, right? Well, not quite. It’s a game where a golden spaceship that looks like a fire-breathing Chinese dragon has to be guided with a trackball through a series of randomly-generated space mazes. 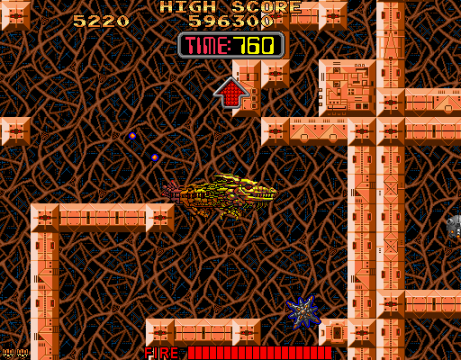 If you’re thinking, “What was the designer smoking to come up with this?”, the answer probably is, the same thing he smoked when he thought of two super-deformed bubble-spewing dragons. Yes, the late Fukio “MTJ” Mitsuji, the father of Bubble Bobble, is behind the creation of this game as well. Unlike his “magnum opus”, this strange arcade game did not set any new standards and is a curiosity at best, not having aged very well.

From what can be gathered by the various plot fragments, it seems that the main antagonists are an alien race called Varia, who want to invade Earth to turn humans into robotic slaves. It is eventually revealed that (more or less like the Bydo from R-Type) they were originally human beings who were products of bio-engineering and, having been left on a planet, have evolved into formless creatures that could possess human bodies, who can also mass-produce human clones. The Syvalion has been stolen from the Varia by the nameless main hero, and in most of the 100+ (!!) endings he defeats them, but a few of them feature his demise or Earth’s invasion, in true Darius fashion. 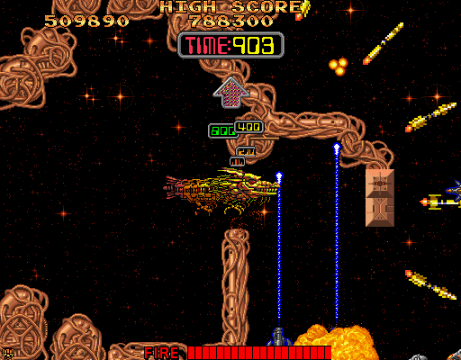 The game begins with a choice between the “tutorial” and the “story” mode, but this description is a bit misleading. The only real difference is that the “tutorial” is composed of five fixed stages, while the real “story” has five stages as well, but their order, graphics, enemy and obstacle placement, bosses, and even plot and endings are chosen randomly (or so it seems) every time. The idea is probably that the player would choose the tutorial to get accustomed to the controls and setting, which are unusual for a shooter, and then goes on to the real stages. However, there’s no real difference in difficulty between the two modes, because the mazes are all basically the same thing. Furthermore they’re not real mazes (helpful arrows always point to the exit), but more like obstacle courses.

The Syvalion is a segmented dragon that can move in all directions and whose primary form of attack is breathing fire. Using the fire breath depletes the bar at the bottom of the screen, but it can be recharged more quickly by moving around. Fire can not only destroy enemies but deflect bullets as well, however, most of the enemies surrounded by a blue glow are indestructible. Every destroyed enemy leaves behind a “molecule”・that falls down the screen in an arc, and these represent the main score opportunity. Grabbing the first one gives a mere 50 points, but every subsequent one doubles its value, with every one after 51,200 points giving 100,000. This kind of exponential scoring is common to other games from MTJ, like Rainbow Islands – the score tags are even written in the colors of the rainbow, from red to violet. 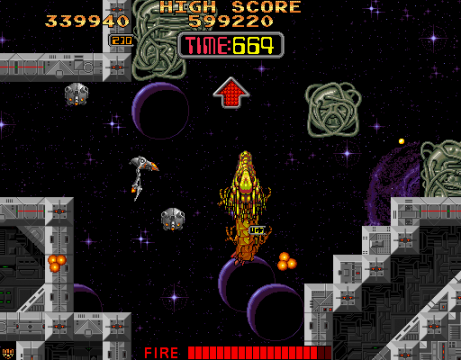 The dragon can pick up the molecules with every part of its body, but this means that it is vulnerable everywhere as well, and it can be a hassle to navigate the narrow corridors and to avoid enemy fire at the same time. Every time Syvalion is hit, one of its segments goes from golden to dark red. When it is down to three, an annoying klaxon alerts his impending demise. Luckily, the enemies sometimes release life capsules. The player needs to find a compromise between unrolling the dragon to catch molecules and capsules, and rolling it up to avoid bullets, lasers, vats of purple stuff and other hazards.

Enemies are constantly appearing everywhere, to boot, and it’s easy to get stuck in corners or between obstacles while little spaceships come in from nowhere and pelt us with bullets, eventually causing your dragon to explode. Not only that, but the time limit is very short and, as usual for Taito games, idling too long in place causes the appearance of invincible stalking enemies, this time flying Terminator-esque robot skulls. 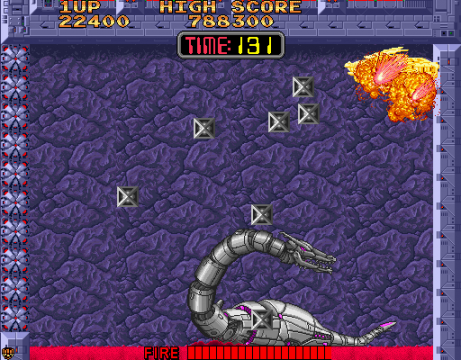 At the end of every level, there is a boss battle. These are fought on a single screen, while you manuever the dragon around them and and at the same time roasting them with his fiery breath. Like everything else, are chosen randomly from a pool of seven, and their difficulty depends on the level you encounter them on. Fighting the same boss at the end of stage 1 or, say, stage 4 changes its behavior: it can become faster, shoot homing projectiles and so on. Burning bosses causes them to stop in their tracks, but obviously the fire is limited, so, as always, there’s the matter to find a compromise between moving and attacking.

It’s not really clear, but it seems that the score plays a part in how all the random parts of the levels are chosen. In story mode only, sometimes beating a boss without losing energy and/or in a short amount of time will bestow upon Syvalion some very nifty power-ups at the beginning of the next level, such as invulnerability, homing missiles, a pod shooting in 8 directions and so on, that last until a life is lost (minus the shields of course) or the end of the level. 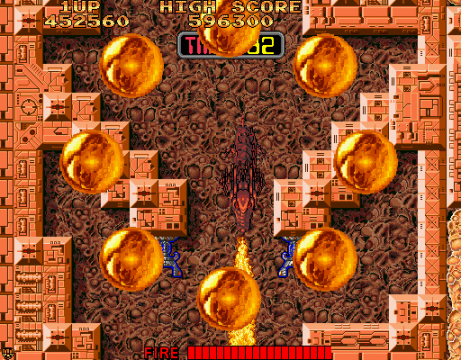 One of the most notable gifts is a golden Silver Hawk from Darius (so… a Golden Hawk!) that follows the dragon around and automatically targets every enemy. Syvalion is in fact a side story of the Darius games: the enemy and boss designs definitely fit Darius’ aesthetics (and one boss, the robot plesiosaur Zandic, came back as Zandick II in Darius Force), and in turn the second form of the Dark Helios boss from 2009’s Darius Burst is a clear nod to the golden dragon itself. Even Proco the pilot is mentioned somewhere in one of the random intros at the beginning of a level.Another thing that this title has in common with Darius games is a soundtrack made by Taito’s in-house band Zuntata (whose member, Hisayoshi “OGR” Ogura even produced the game) and, suffice to say, it’s really cool. It’s not as experimental as some of their weirder Darius tracks, but with its synth-heavy rocking beats it really spices up the action. 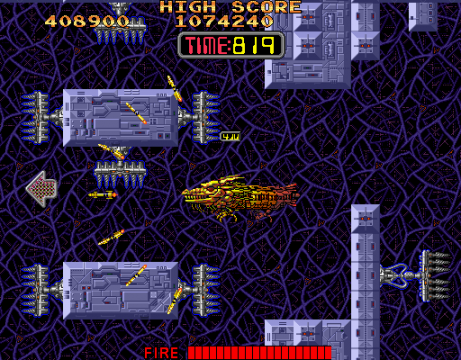 Syvalion is interesting, especially for an arcade experience, and not only because of the trackball controls. The gameplay is frantic and extremely fast-paced (the whole game can be completed in less than 15 minutes), the main goal is simply the quest for the best score (which is proudly displayed for both regular and tutorial levels), and the randomized nature of the levels, in theory, should lead experienced players who desire new challenges to deposit new coins. One of its claims to fame is that it apparently offers about 100 ending sequences, triggered by the plot fragments and other random factors. But, since they all just consist of single screens with text and an animated Syvalion under it, no sane human being would ever want to play that many times to try and see them all.

As it is, the game may be seen as bizarre and unimpressive, a series of gimmicks piled one on top of the other (even if the idea of procedurally-generated levels is interesting), because it could ever really exist in the period it was made. Outside of arcades it feels out of place, now that scoring points is no more the main concern and trackballs don’t exist anymore. However, for its strangeness and obscurity, it still received a few ports along the years.

Outside of its reappearance on the Taito Legends 2 release in 2006 (but as an exclusive for the PlayStation 2 version of the compilation, further enhancing its obscurity), Syvalion received a couple of ports, one for Japanese computer Sharp X68000 two years later, in 1990, and one for SNES in 1992. The latter one was never released in the US, but an English translated version was released in Europe in a very limited quantity.

The SNES port on the outside is faithful to the arcade game, even if scaled down for obvious reasons. The original arcade had a fairly large resolution of 512×400, while the gameplay is scaled down to 256×224. (It does utilize the SNES’ rarely used high resolution display of 512×224 for the story scenes.) There are the random elements, both tutorial and regular modes are present, and another mode was added, a one-level score attack wherein you have to gain the most points in only one life.

However, the two most important things in the game are missing. For starters, everything is much slower, the sense of speed is lost and Syvalion seems plodding and hard to control. Bashing against walls and getting stuck in corridors was a product of the frantic pace of the gameplay in the arcade, but here feels more like a result of the joypad’s limitations and of the game’s general slowness, and it is much more annoying as such. The second missing thing is Zuntata’s kick-ass soundtrack, replaced by some competent if generic and unremarkable sci-fi tracks. The new tracks were composed by Hayato Matsuo, also known for his work on Ogre Battle and Choaniki, and produced by Koichi Sugiyama, the composer of Dragon Quest. Without those two elements, there’s no real reason to play this version of the game outside of collection purposes.

The X68000 porting is definitely better. It runs at a lower resolution than the arcade game, so it looks similar to the SNES game, but the speed and pacing is identical. It even lets you use the mouse or a trackball for faithful control. 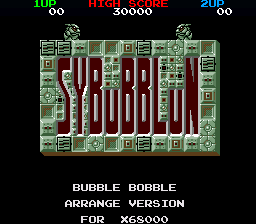 Basically, it’s Bubble Bobble with the dragons getting a golden metallic make-up, enemies and items redesigned to be reminiscent of Syvalion‘s graphics (for example, Baron von Blubba has been replaced by the robotic skulls) and with rearranged music, but the difficulty has been kicked up a few notches. The very first level (of 20) has Bub and Bob having to reach immobile enemies on high platforms that constantly pelt them with stun bullets, and in general, the player needs to have mastered the art of jumping on bubbles and bursting them at the right moment. The platform layouts often are hard to navigate, enemies free themselves from the bubbles in a couple of seconds and some levels pull mean tricks like immediately putting the enemies in “Hurry Up!” fury mode. Level 20 features a boss fight that plays similar to the battle against Super Drunk, but features a huge super-deformed version of the Glodloid (giant ammonite) boss that uses the same attacks as his Syvalion counterpart. 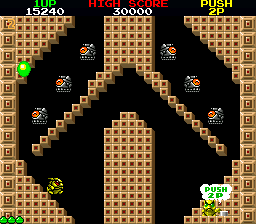 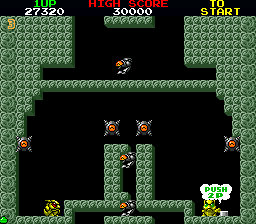 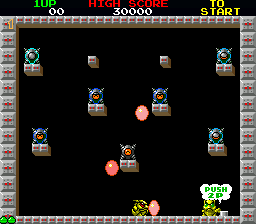 Sybubblun is a very interesting and well-developed, if difficult, addition to the main game. It also goes on to show that, like many other creators whose names are forever linked to their most famous achievement, MTJ could never escape the shadow of his most famous creation.

Links:
Gaming.moe Source of info and images about Sybubblun.
Darius Wiki Source of connections between Syvalion and the Darius saga. 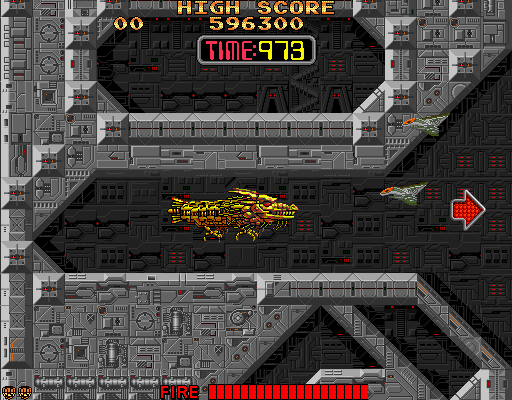 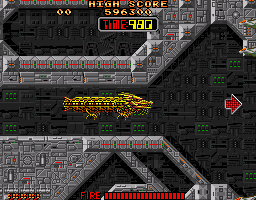 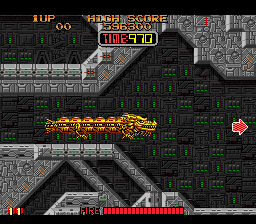